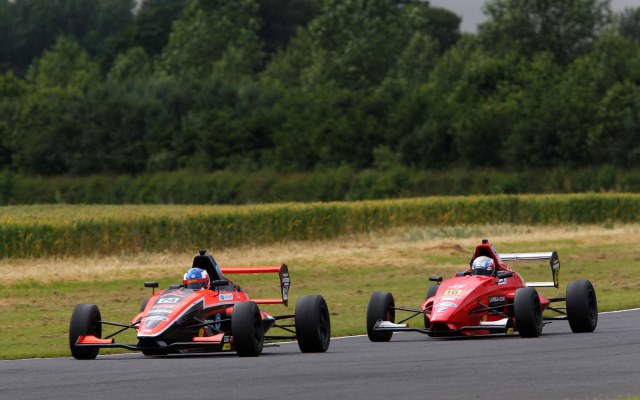 James Abbott held on under a late attack from a charging Ashley Sutton to win the third Formula Ford race of the Croft weekend.

A good start from second-place starter Abbott moved him into the lead at the start ahead of Harrison Scott.

Race two winner Sutton started sixth on the grid, with he and Jayde Kruger ahead working their way past Max Marshall on the opening lap. Sutton then put pressure on Kruger, eventually getting past and claiming fourth at the hairpin at the end of lap six. Sutton soon then caught Juan Rosso, passing him with a superb move around the outside of the first corner.

Sutton then set off in chase of the leading duo. Contact was made with Scott when he attempted to take second, but both escaped untroubled and Sutton was able to claim the place down the inside.

Abbott had by then opened up a 1.5 second lead but he was caught by Sutton on the last lap. Abbott was forced to take a defensive line through the final hairpin, but he was able to hold on and claim his second win of the season by 0.110 seconds.

Scott completed a trio of podium finishes from the weekend in third. Rosso was under attack from Kruger in the closing stages, but the South African was handed a five-second penalty for exceeding track limits. Once that was applied, he just about held onto fifth ahead of JTR team-mate Marshall, who recovered from dropping to ninth on the first lap. Kruger is now nine points behind Scott in the standings, having led by the same margin coming into the weekend.

Connor Mills and?Ricky Collard completed the top eight finishers. Chris Mealin was ninth after after contact from Mills had turned him around entering the hairpin at the end of the third lap. Louise Richardson pitted from tenth on the penultimate lap, allowing Connor Jupp to complete the top ten after an earlier stop.

Stroll cruises to victory in race three at Imola