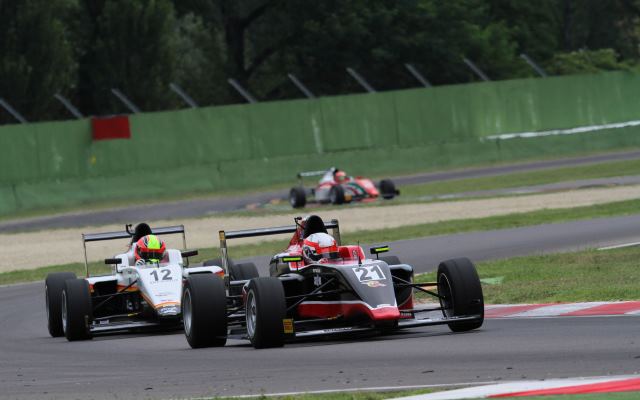 Italian racer Mattia Drudi took a decisive victory in the reverse-grid race two at the second round of the Italian F4 season at Imola.

The start of the race saw poleman Gustavo Bandeira lose out to Takashi Kasai, while Andrea Russo got a terrific start from seventh on the grid and was up to third by the first corner. The Italian?lost no time in passing Bandeira and Kasai and astonishingly, led the race after lap one.

Kasai and Bandeira continued to drop back, with Drudi and Alain Valente getting past them by lap two. Drudi then began to quickly close in on Russo for the lead, and passed him on lap six.

Behind them, the Prema duo of Brandon Maisano and Lance Stroll charged up the field, moving up to third and fourth by the seventh lap. In another two laps, the pair had reeled?in the struggling Russo.

The Diegi driver managed to hold off the advances of Maisano and Stroll for most of the race, but a collision between Maisano and Russo on the last lap at the Tamburello chicane handed the advantage to the Ferrari junior, who managed to finish second. Maisano could only manage third, while Russo limped to the line in tenth, having picked up a puncture in the incident.

Valente was once again, the best Jenzer driver in fourth, with Leonardo Pulcini making a late move on Euronova teammate Ivan Matveev to take sixth. Kasai and Bandeira slid down to seventh and eighth places at the flag from their front row starting positions, the Brazilian having to make an opportunistic dive at Variante Bassa on the final lap to pass Andrea Fontana, after the latter was delayed by Russo’s slow car.

Bahraini driver Ali Al-Khalifa narrowly missed out on the points in 11th, but took second place in the Trophy Class behind Maisano.