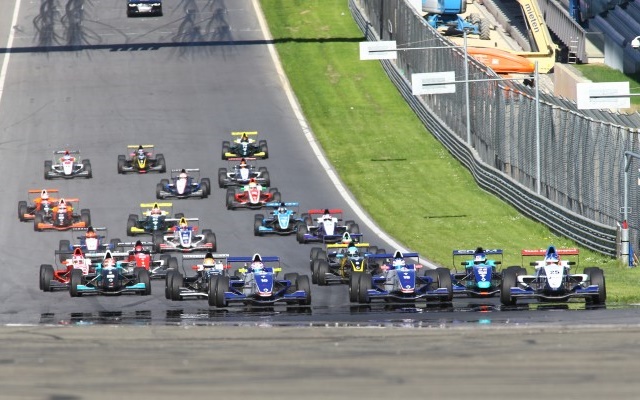 Having pulled in huge numbers of participants over the last couple of seasons, the Formula Renault 2.0 Alps series is set to accomodate fewer full-timers this year – an understandable consequence of Prema and Jenzer calling it quits on their FR2.0 programmes and Tech 1 and Fortec appearing to focus on Eurocup campaigns.

But, as usual, it’s not all about quantity as the championship should continue to feature some huge talents among its frontrunning ranks.

The 2014 Alps title was seemingly decided the second Nyck de Vries announced he’d be doing the series full-time, so it’s a relief to see two to three names enter the season with about equal chances.

Below, we outline what to expect from those racing in the latest iteration of Formula Renault 2.0 Alps. 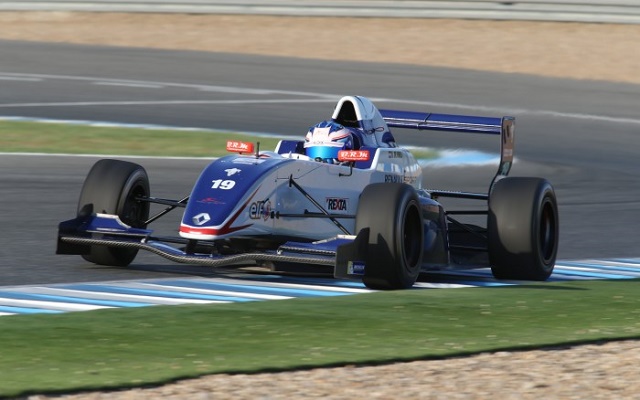 They’ve won drivers’ titles in two of the four Alps seasons with Kvyat and de Vries, but Koiranen’s 2015 quintet might just be their best lineup in the series yet, with every single signing appearing more than capable to contribute to the teams’ points tally.

The lineup has its own standouts, of course. Eurocup’s 2014 rookie race winner Jack Aitken is definitely among the title favorites for the crown as he emulates de Vries with an Alps – Eurocup dual programme for his third year in FR2.0. He’s in good form, too, having beaten Road to Indy regulars to the Pro Mazda Winterfest title in the off-season.

Fellow Brit Jake Hughes will also be a force to be reckoned with. Hughes enjoyed a solid debut campaign in FR2.0 NEC last year, finishing eighth, but his 2013 charge to the BRDC F4 title suggests he is capable of much more.

Then there’s Stefan Riener, whose part-time Alps campaign with Cram yielded a pole and podium in 2014. His off-season stint in the Toyota Racing Series proved he’s got work to do when it comes to consistency, but the Austrian is a proven name in 2.0 racing and should trouble his British teammates.

Philip Hamprecht enters Formula Renault 2.0 after one year in ADAC Formel Masters, just as Riener had done last year. And it looks like the German has also taken well to FR2.0 machinery as he ended the two days of the NEC pre-season test in sixth and third.

17-year-old Bruno Baptista will be the one making the toughest switch as he goes from a title-winning debut campaign in F4 Sudamericana to European racing in Alps. He’ll surely need some time to adapt, but it will be interesting to follow his progress. 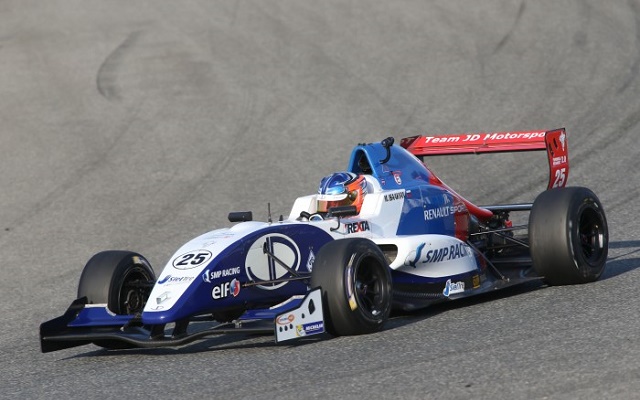 2014 marked JD Motorsport’s first full-time season in Formula Renault 2.0 Alps and to say it went well would be an understatement. The Italian team has got only one full-time driver – a rookie at that – but they probably couldn’t have found a much better signing than a very in-form Matevos Isaakyan.

Isaakyan, who finished third despite missing the opening round and took two wins at Spielberg, is back in 2015. As it stands, he’s almost certainly the only one who can prevent a second consecutive Koiranen title.

If Isaakyan does go as well as he did last year, JD Motorsport will be relying on Thiago Vivacqua to deliver the points needed for a teams’ championship challenge. The Brazilian, who was a solid karting driver, endured a rocky first campaign in Alps, but seems to have gelled well with JD, having placed in the top ten in all four sessions of the Eurocup pre-season Aragon test. 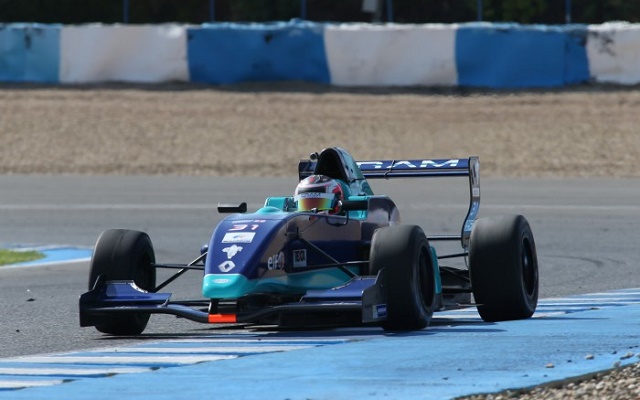 After Cram’s 2013 Abarth champion Alessio Rovera took the team to fifth in the Alps teams’ standings last year, it is no surprise to see the Italian squad expand to three full-time entries.

Both of their drivers have previous Formula Renault 2.0 experience although, in both Matteo Ferrer‘s and TJ Fischer‘s case, the cars they raced were the older-spec machines from the Protyre Formula Renault series. Last year marked Ferrer’s sophomore season in Protyre and yielded a third place overall and a maiden single-seater win at Rockingham.

Fischer, on the other hand, was tackling his first season in Europe in 2014, finishing as the sixth-best Protyre driver.

The final part of the lineup is Vasily Romanov, whose car-racing debut last year took place in the Eurocup and allegedly resulted in a falling out with Tech 1. He does not have much to show for that campaign, but took a tenth-place finish among Eurocup regulars in last-season’s Alps finale with Cram.

Matching Rovera’s season-best result of second will be a tough ask and the trio are more likely to aim for regular points. 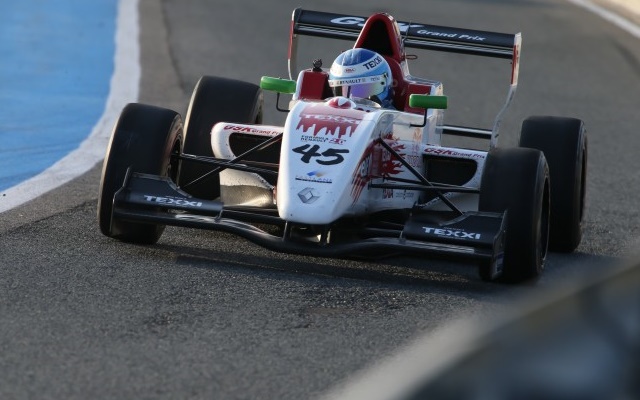 GSK have been present on the Alps grid in every round since the 2012 but are yet to finish a season in the top ten in the teams’ standings. But that statistic should be dead and buried by the end of 2015 as the lineup they brought this time around is very ambitious.

Russian racer Denis Bulatov makes the step to Alps, having made his debut in cars as part of French F4’s very competitive 2014 grid. He ended last season in fifth overall with two wins.

Italian F4 graduate Andrea Russo is another very welcome addition to the GSK lineup. In the national F4 series, he was the only driver besides champion Lance Stroll to lead the points standings and ended the season in third place.

Finally, Daniele Cazzaniga has been retained by GSK. He is yet to score any points in his two seasons in Alps so far, but did take the V de V Single-seater Challenge title last year. 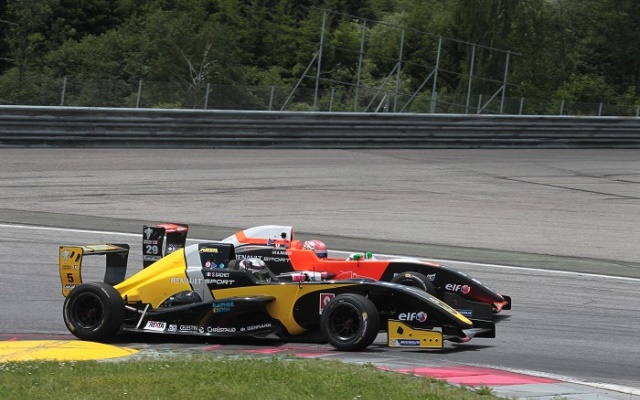 Alessandro Perullo, second in last year’s retooled Formula Abarth series, will make the move to FR2.0 as Technorace’s sole entrant for the season. Meanwhile, Ukrainian Danyil Pronenko switches from GSK to BVM, having taken a best finish of 15th in his debut season last year.

Aussie James Allen, a podium finisher in Formula BMW Talent Cup, will continue with ARTA Engineering after taking two points in his debut season last year. At Imola, he will be joined by French F4 graduate Amaury Richard.

Tech 1’s whole Eurocup lineup – Anthoine Hubert, Simon Gachet and Hugo de Sadeleer – will be present at Imola and could make further appearances down the line. The same is true for Fortec drivers Ben Barnicoat and Martin Kodric. And, as it often happens in Alps, some of the aforementioned five guests could very well steal the limelight from the regulars in the opening round.