With the German and British championships cancelled for 2015, Euroformula Open is now the sole alternative to the FIA European F3 Championship for drivers who want to race in an internationally recognized series using F3 cars.

It’s no surprise then that the series is set to kick off with a healthy grid of 20 cars, the number remaining approximately on level with last year.

Sandy Stuvik, who narrowly missed out on the 2013 title, returned for a second campaign last year and wound up dominating. Although the Thai racer was challenged by Artur Janosz and Alex Palou?in the first half of the season, an annihilating streak of seven victories in the second part made the title a no-contest.

Sophomore driver Janosz took the runner-up spot after a close battle with karting sensation Palou, who had to settle for third in the end.

In 2015 Stuvik, Janosz and Palou will all move to GP3, while the rest of the top eight returns for another season of Euroformula Open, joined by new names from all sorts of different countries.

Below we look at each of the teams that make up Euroformula Open and their respective line-ups for the season opener. 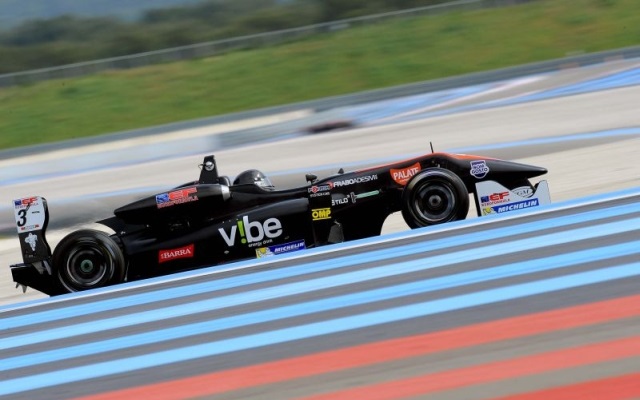 Team champions in the past three years, the Piacenza-based squad continue their involvement in the series with a massive line-up of six cars. Aiming to retain the title, they enlisted some of the more experienced drivers but they also introduce several new faces to the field.

Andres Saravia will spend his second season with the team and third in the series altogether. The 24-year-old Guatemalan finished eighth last year and will certainly aim for at least a maiden victory this time round.

Another driver to stick with RP is Dzhon Simonyan. The Russian racer had promising pace as a rookie last year but on many occasions he struggled to deliver. With one season of experience, he is also expected to fight for wins.

Damiano Fioravanti, 18, will switch from Corbetta Competizioni to RP. The Italian has also been racing in Euroformula Open in the past two years but only did a limited schedule in 2014, his best finish a fifth place at Catalunya.

Vitor Baptista, one of the most promising newcomers of the 2015 Euroformula Open season, is also joining the Italian squad. Last year, the 16-year-old Brazilian won Formula Brasil Class B in a dominant fashion, collecting a total of 13 class and three overall wins. Although his previous experience in F3 could have contributed to his second and fourth place finishes from the Winter Series, it was still a massively impressive showing and seems to indicate he will not need much time to fight for victories.

The team is completed by the Polish duo of Igor Walilko and Antoni Ptak. Walilko was tenth in ADAC Formel Masters last season, picking up podiums in his debut year in single-seaters. Ptak, on the other hand, will take on the series as a complete newcomer to cars, having raced in Rotax and Florida Winter Tour karting events in the past. 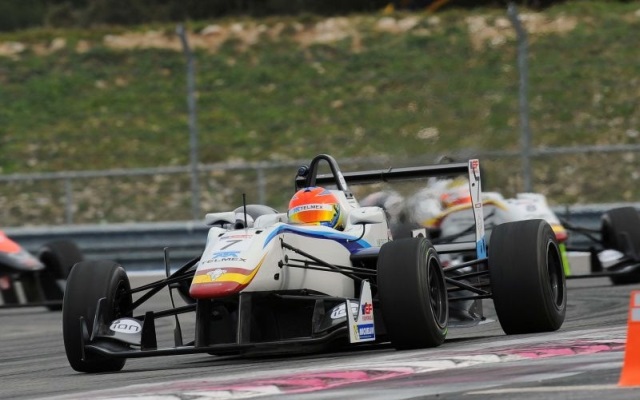 In 2014, the Spanish team have enjoyed their most successful season since their return to the series four years ago, mainly thanks to Alex Palou’s achievements. They will begin the new season with four entrants, having expanded from last year’s three-car line-up.

Konstantin Tereshchenko continues his collaboration with the team after a positive debut. Tereshchenko was a regular point-scorer for most of the 2014 season, even achieving a podium finish at the Hungaroring and ending up sixth in the standings.

The team will field another returnee, Brazilian Henrique Baptista, whose rookie season was more quiet than Tereshchenko’s as he only took 20th with a best finish of sixth.

Similarly to RP, Campos also signed a rookie worth looking out for in BRDC F4 race winner Diego Menchaca. Menchaca, 20, proved his worth in the past by finishing third in LATAM Challenge and seventh among the competitive BRDC F4 field last year.

Finally, the team is completed by Kuwaiti driver Ahmad Al Ghanem who just ended his Formula Gulf 1000 campaign last weekend, taking second in the standings. Although he was a late addition to the team and didn’t take part in the pre-season testing, his five wins and twelve podiums out of fourteen races in Formula Gulf suggests he could be able to deliver some solid results. 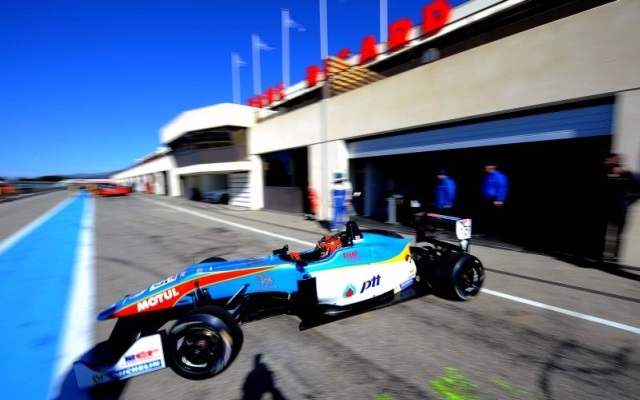 After Ed Jones gave them a drivers’ title two years ago, West-Tec’s 2014 campaign was a much quiter one with no race wins and their best driver Yarin Stern only finishing fifth.

The British team will be looking to bounce back, having retained their best two drivers from last year, Stern and Tanart Sathienthirakul. Stern is one of three drivers in the field with two years of experience. His 2014 season was filled with mixed results – on three weekends he finished third on both races, yet he had at least one retirement in all the other rounds.

He will be joined by Sathienthirakul, whose first year in the series was a consistent one as he scored points in all but four races and ended up seventh in the standings. 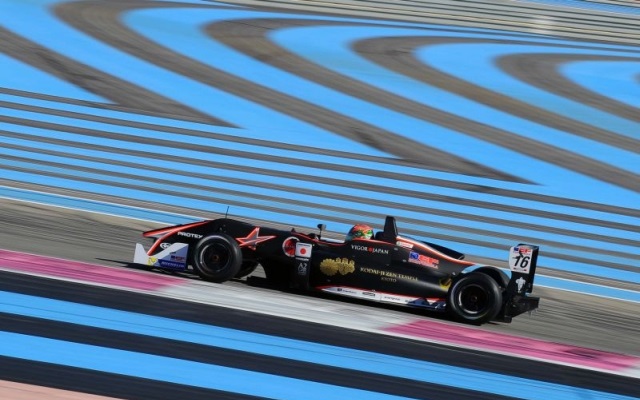 Former F1 driver Emilio de Villota’s team continue their participation in the series for a ninth year in a row. They are another squad to expand their line-up as they enter the season opener with four drivers.

They retained Yu Kanamaru, who had a good rookie season last year, taking fourth with four podiums. The FR2.0 graduate, who is the highest-placed returnee, has established himself as the title favourite after winning the first Winter Series race from pole.

Kanamaru will be accompanied by a trio of newcomers.?Michael Dorrbecker has been a promising karter in Mexican championships but he is yet to shine in single-seaters, having finished seventh in Formula Abarth and ninth in FA1 in the past couple of years. His fellow countryman Jose Manuel Vilalta, who arrives after racing mostly in South America, and karting graduate Otto Sanchez are both set to make their European single-seater debut this weekend. 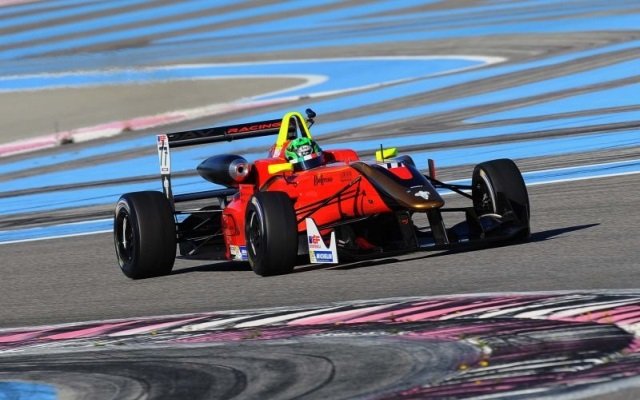 Despite dominating the 2012 Copa class championship with Kevin Giovesi, DAV Racing found little success over the next two seasons and fielded just one full-time driver last year. For 2015, they picked two Italians with massive talent but little budget, which hopefully won’t stop them from completing the full season.

Their first signing was 2013 Karting World Championship Junior runner-up Leonardo Pulcini. He was one of the most promising Italians in the inaugural season of the national F4 series last year, taking fourth in the standings. Pulcini also showed up for the season finale of Euroformula Open last year, finishing both races within the top ten.

His teammate at Jerez will be Alessio Rovera, who secured a last-minute deal with the team. Rovera also took part in the last weekend of the previous season and he finished the first race in a promising sixth. Moreover, he picked up a victory in the second race of the EF Open Winter Series with BVM after taking third in the first one. 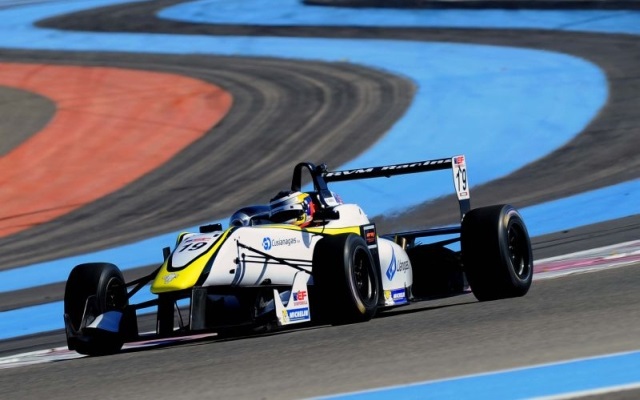 The third Italian team on the grid started their Euroformula Open operations in 2013 with the solid duo of Mario Marasca and Vicky Piria. Despite a good debut season, the team could only muster a limited schedule last year, present in three of the eight rounds. Their two-car line-up for the season opener might suggest they are in for more this time.

BVM teams up with 20-year-old Colombian William Barbosa, who completed a full-time campaign in the series last year, finishing 24th in the standings. He topped one of the sessions in the Winter Series and could improve massively this time around.

He will be joined by Spaniard Javier Cobian, who is the third car-racing novice in the field. Cobian enjoyed a successful karting career, its highlights being a second place in the 2012 CIK-FIA Academy Trophy or third in the Spanish KF3 Championship the same year.