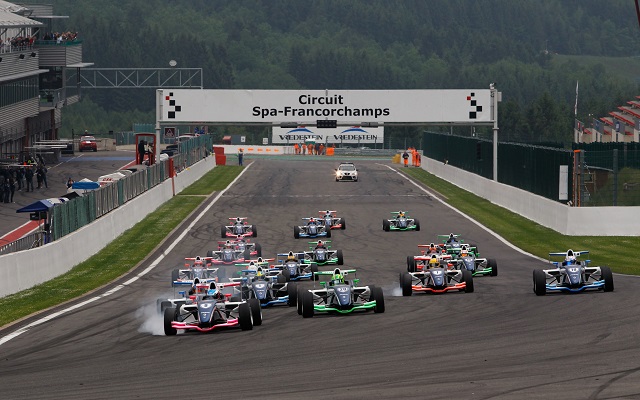 Being one of the best entry-level championships around, French F4 expectedly secured a wave of supremely promising new drivers for its 2014 season.

Last year, it was Anthoine Hubert who stole the show, winning nine races out of twelve in the first half of the season to secure the title, as he beat closest rivals Jules Gounon and Tristan Viidas by more than a hundred points. This year, Hubert will replace 2013 Eurocup Formula Renault champion Pierre Gasly at Tech 1 Racing, while Gounon is also making a move to the Eurocup with Belgian outfit KTR. Matevos Isaakyan and Dennis Anoschin will also graduate to various Formula Renault 2.0 championships, while Neal van Vaerenbergh has been spotted in the opening round of Formula Renault 1.6 NEC. As several high-class newcomers have arrived to follow in the footsteps of the likes of Jean-Eric Vergne, Arthur Pic, Stoffel Vandoorne or Gasly, we take a look at the 2014 field.

It is never wise to make predictions in entry-level racing, yet it’s hard to deny Felix Hirsiger is universally considered to be one of the clear pre-season title favourites. The 15-year-old Swiss driver is in the privileged situation of having a year of experience in the championship as he returns for a sophomore season, having finished sixth last year with four podiums. Hirsiger, who also has a solid karting resume as he had won both Swiss KF3 and Rotax Mini championships, appropriately showed great pace in the pre-season testing. With all of his 2013 rivals gone, he may surely want to benefit from his experience in the early stages of the season to pull clear of the newcomers.

Lasse Sorensen, younger brother of Lotus test driver Marco, will participate in the series with two years of prior single-seater experience. In 2012, the 17-year-old Sorensen made his debut in Formula Ford Denmark where he finished fifth – he then stayed for a second season to miss the title by only 24 points. Using his talent and knowledge of cars, Sorensen could be able to challenge Hirsiger right from the beginning.

While lacking in experience, possibly the biggest star of the grid is karting prodigy Dorian Boccolacci, who is part of Lotus Junior F1 team. In 2013, Boccolacci collected titles in WSK Euroseries KF, CIK-FIA Inernational Super Cup KZ2 and the Andrea Margutti Trophy, having also finished second in the WSK Final Cup KF, sixth in the CIK-FIA European Championship KF and ninth in the World Championship. Boccolacci is clearly one of the most exciting karting graduates of the season,?joining the likes of Max Verstappen, George Russell and Ben Barnicoat – and perhaps he could aim for a similar debut season to Hubert’s from last year.

Another promising French karter coming from the world of CIK-FIA and WSK karting is Valentin Moineault, who was part of ART Grand Prix’s squad and finished second in the CIK-FIA European KF championship. Russian Karting Cup champion Denis Bulatov, who also finished ninth in Euro Winter Cup last year and was showing great pace in the pre-season testing, is set to make an impressive debut season in single-seaters as well. Meanwhile, yet another exciting addition to the field is highly-successful Swiss karter Gjergj Haxhiu, who will follow in the footsteps of compatriot Hirsiger to begin his career in French F4 at the age of 14. Haxhiu ended his karting career as a two times Swiss KF3 and Super Mini champion, having also finished second WSK Masters Series 60 Mini class.

19-time state and three-time national champion Joseph Mawson also joins French F4 and, having the full support of the Australian Federation, looks well set to chase his dreams in become an F1 or Indycar driver in the future. Finland continues to be part of the series with KF2 and KF1 Finnish champion Niclas Nylund, whose karting resume also includes ninth place in CIK-FIA European KF, and 15-year-old Simo Laaksonen, another former ART karter and a Finnish KF3 champion.

Apart from Hirsiger, Amaury Richard is the only other driver who enters his second full season in the series. Last year, he finished 19th, having managed to score points on two occasions in the final round and, given his young age of 16, he can improve a lot this year. Paul Hokfelt Jr also made his debut in the French F4 last year with a two-round schedule and impressively managed to secure some points on his second appearances. As such, expecting Hokfelt to be a contender for the top positions would not unreasonable.

Similarly to Viidas last year, David Droux makes the move from Formula BMW Talent Cup to French F4. The 17-year-old Droux finished eighth in the Talent Cup, only ten points away from newly-signed FIA F3 driver Jules Szymkowiak. Swede Reuben Kressner is another driver from Formula BMW and also has Formula Renault 2.0 experience, as both him and Droux tested both of these cars in the previous years. However, this is Kressner’s competitive debut in cars – he wasn’t part of any racing series just yet has only finished his karting career last year with third in Swedish KF2.

Supported by SMP Racing, Vladimir Atoev, 2009 Russian Supermini class champion, is their latest protege to make the move to single-seaters. In the recent years, Atoev was sixth in WSK Final Cup KF2 and finished runner-up in national KF3. 15-year-old Bryan Elpitiya is also graduating from CIK-FIA and WSK karting series and is supported by FFSA. Finally, hugely successful national-level karter, 2012 and 2013 Rotax Max Colombia champion Juan Manuel Jimenez is another promising addition to the grid.

As a mainly national entry-series, French F4 in 2014 will feature other French drivers apart from Boccolacci, Moineault, Richard and Elpitiya. 17-year-old Erwan Jule finished third in CIK-FIA Academy Trophy, while Valentin Hasse-Clot is the reigning Rotax France champion and has won the 24h Le Mans karting competition. The French contingent is completed by Hugo Sugnot-Darniche – grandson of two times European Rally champion Bernard Darniche – as well as female driver Anouck Abadie and Sodi World Series graduate Tom Soubiron. Last but not least, Axel Matus from Mexico and Joao Carvalho from Portugal round out the grid of 23 cars.