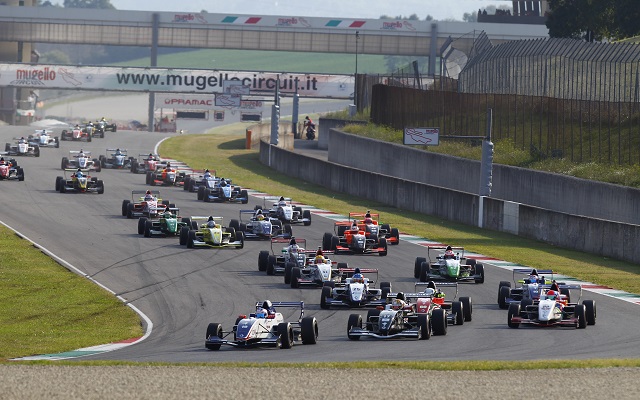 After a 2013 dominated by Prema Powerteam, the 2014 season of Formula Renault 2.0 Alps saw Koiranen’s return to the forefront as experienced 2.0 racer Nyck de Vries helped the team ease to both the drivers’ and the teams’ title.

Despite a spell of domination by the Dutchman, it was still yet another strong season for Alps – with a number of up-and-coming youngsters mixing it with the frequent guests from the Eurocup series and providing for a solid level of competition.

Below, we take a look at some of the key names that made up this year in the championship. 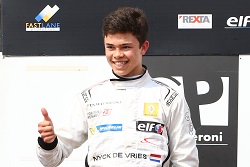 The decision to place de Vries in Alps alongside a third Eurocup year was a bit of a surprise and a harsh blow to the less experienced racers in the field, as he’s long since proven himself capable of winning FR2.0 races.

The goal this time around was, obviously, a landslide title campaign and, in the end, the McLaren junior delivered just that. He took the lead in the standings right from the get go and was never in any real danger of losing it, showing remarkable consistency as he finished all but two races on the podium. He claimed maximum points on five of the seven weekends.

Coupled with his similarly dominant Eurocup campaign, his Alps exploits made up his best season yet and he’s secured a well-deserved promotion to Formula Renault 3.5 for 2015. Season rating: 9/10 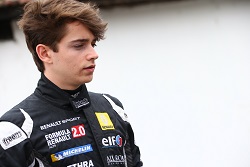 After several starring years on the world karting scene, Leclerc’s car debut season was a long awaited one and it lived up to expectations.

A non-score at the Imola opener aside, Leclerc delivered a superb rookie season, maturing and improving round after round, which culminated in a spectacular double victory at Monza and saw a further five podium appearances throughout the campaign.

A protege of Nicolas Todt’s?All Road Management firm, he has also been superb in his guest Eurocup outings and the chief 2.0 series appears to be a logical next step – one he’s more than ready for. In fact, it wouldn’t be a surprise to seem him take a higher jump up the ladder than that. Season rating: 9 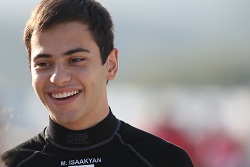 Rapid but inconsistent in his debut car year in French F4 in 2013, Isaakyan made headlines earlier this year with superb pace in pre-season Eurocup testing.

His first full year in FR2.0 showed that his speed there was no fluke. After being parked for the season opener at Imola because he had not yet turned 16, he scored a podium in his first Alps race at Pau and then produced a shock double victory at Spielberg.

The rest of his season was similarly encouraging and he would’ve been right up there with Leclerc if not for a bad luck retirement at Monza. Supported by the SMP Racing scheme, he should have every Eurocup team knocking on his door this off-season. Season rating: 9 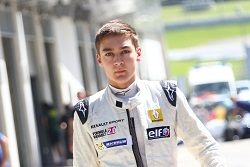 A star karting driver and extremely rapid on his FR2.0 testing debut, Russell pleasantly surprised by signing on to a full Alps season alongside his campaign in the entry-level BRDC F4 series.

He was on the pace right off the bat and reliably finished at the front throughout the season, including a maiden podium at Spielberg, where he outraced his experienced squadmate de Vries. The second half of his year was slightly quieter, not helped by missing Monza to illness, but he added a fair amount of points to his tally to finish a clear fourth in the standings.

Now also a Eurocup race winner and the BRDC F4 champion, he should be one of the hottest items on the transfer market during the silly season as he chases a well-deserved full-time Eurocup seat. Season rating: 8 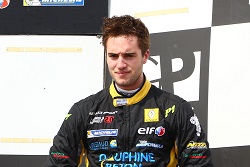 Having graduated from French F4 as one of its top drivers in 2012, Gachet then enjoyed a solid first year in Alps, finishing 14th overall.

He stayed on for a second season with ARTA and was de Vries’ chief title rival over the first two rounds, finishing on the podium in the three opening races. However, the rest of his season wasn’t quite up to par as he wouldn’t finish higher than seventh over the subsequent rounds, eventually slipping down to fifth in the standings behind rookies Leclerc, Isaakyan and Russell.

Deserves another season in 2.0 to prove he can deliver on the early promise of this year. A move to one of the established big teams may help, and he’s already run with ART in the Eurocup recently. Season rating: 7 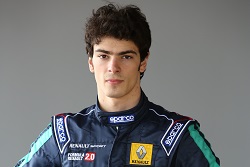 After winning Formula Abarth in his rookie year in cars, Rovera continued his partnership with Cram, moving onto the next logical step – FR2.0 Alps.

He was unable to score points in the first two rounds of the season (despite qualifying third twice at Pau) but then recorded a well-deserved maiden podium at Spielberg and put on a season-best performance at Monza later on with a second and a third.

Having worryingly missed the final round of the year, he can hopefully find the budget to continue at this level – another Alps campaign could very well see him fight for the title. A move to EF Open could also be on the cards – he’s been testing with Corbetta and will take part in the season finale at Catalunya. Season rating: 7 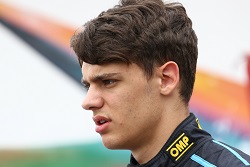 22nd in his debut year in Alps, Capitanio signed on for another campaign with BVM in 2014 and made some strong progress.

He reliably racked up the points throughout the season and had a breakout round at Monza, enjoying a great qualifying and then taking a personal best finish of fourth.

Having enjoyed success on the Italian single-seater scene since 2012, he could consider options in national GT or touring car categories. However, another year in open-wheelers would not be undeserved. Season rating: 6 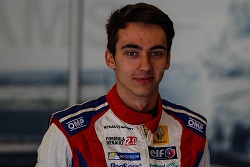 Korneev was another sophomore Alps driver who showed a marked improvement in his second year in the series.

The Russian youngster didn’t match his 2013 best finish of eighth, but was generally a lot more consistent, running in or around the top ten every weekend.

Will be a contender for podiums if he sticks around for another year, but, at 21, GT racing could be a viable alternative. Season rating: 6 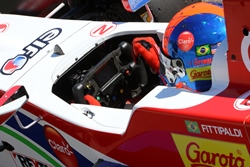 Pietro Fittipaldi, grandson of two-time F1 champion Emerson, was most impressive in his main campaign of 2014 in the Protyre series, but did produce a couple of eye-catching results in his Alps outings.

Having joined the grid at Spa, he was on pace right away and stacked up well against the series regulars at Monza and Mugello, coming close to a podium finish.

With emerging links to the Ferrari Driver Academy, Alps could be a viable option for 2014 as part of a full-time programme in mainland Europe and a title assault would surely be on the cards. Season rating: 7 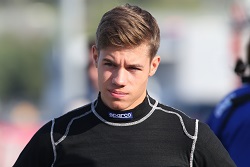 An ADAC Formel Masters podium finisher in his debut season in cars, Riener was very active in 2014, racing in various FR2.0 championships.

In Alps, he teamed up with Cram for the final four rounds of the season. At Monza, he delivered a surprise pole, and while the victory in the race eluded him, he did join the team’s regular Rovera on the podium.

He finished the four last races of the season in the points and would be a good option for the top end teams in 2015 unless he should opt for a straight switch to the Eurocup. Season rating: 7

Originally set to run Russell but losing him to Koiranen, 2013 champions Prema settled for a lineup consisting of Toyota Racing Series champion Andrew Tang and Alps stalwart Alex Bosak. The Singaporean went well in the highly-competitive Imola opener against Eurocup regulars, but was forced to sit out the rest of the year due to military service. That left Bosak as the focus of the Italian team’s efforts, and the Polish racer did a solid enough job to finish 11th overall.

2011 and 2012 champions Tech 1 fielded a four-car lineup which firmly resided in the midfield for most of the season. Sophomore racer Luke Chudleigh placed the highest in 12th, just a point ahead of Formula Masters China graduate Akash Nandy. Rookie Hugo de Sadeleer? and NEC graduate Patric Armand weren’t far behind, picking up their best finishes at Pau – with de Sadeleer being the only Tech 1 regular to secure a podium.

Martin Kodric and Thiago Vivacqua joined Leclerc as karting graduates in Fortec’s lineup, but were generally overshadowed by the Monegasque, although Kodric did make the top ten on three occasions. Meanwhile, newly-crowned NEC champion Ben Barnicoat and BRDC F4 graduate Seb Morris had solid part-time stints with the Northamptonshire squad in Alps – Morris placed sixth twice, while Barnicoat made the top five on three occasions.

Jenzer’s sole full-timer Marek Bockmann was rapid at Spielberg and produced a solid drive to tenth from 23rd on the grid at Spa. TS Corse’s Matteo Gonfiantini recorded three top-ten finishes at Pau and Monza, while BVM’s second driver Semen Evstigneev recorded a seventh place within a generally forgettable season.

The only non-regular to win a race in 2014 was Prema’s Bruno Bonifacio, who controlled the first Jerez race from pole to fourth Alps win.

His Eurocup squadmates Dennis Olsen and Hans Villemi were also present at he front, with the Norwegian displaying his trademark consistency to finish all six of his races in the top eight.

Egor Orudzhev and Matt Parry also made the podium at Jerez, while Jack Aitken recorded a pair of fourths at Imola.