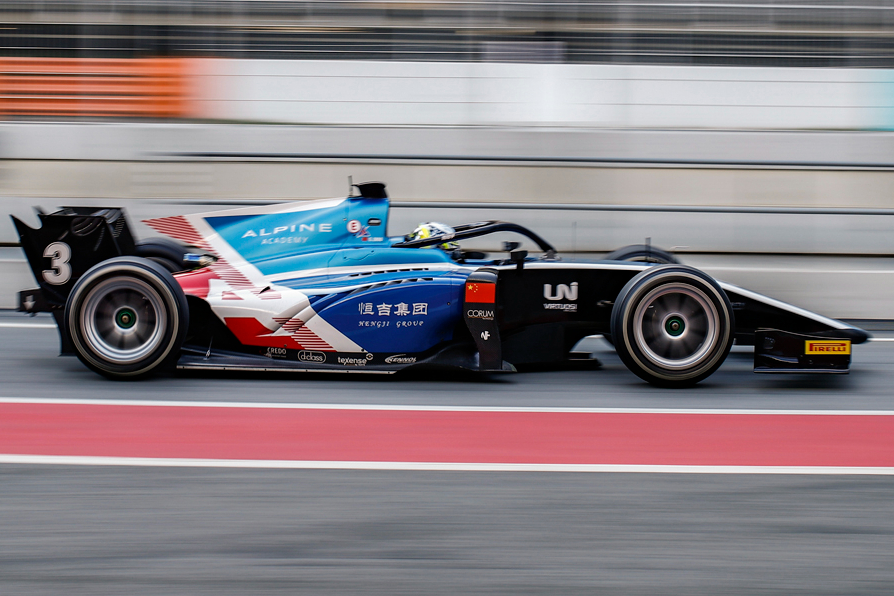 Guanyu Zhou won the feature race of round four of the Formula 2 season at Silverstone.

After going pointless in the last four races and losing the points lead, the Virtuosi Racing driver bounced back with his third win of 2021.

He was joined on the podium by Carlin’s Dan Ticktum and Prema’s Oscar Piastri, who had started from pole.

Zhou started alongside Piastri on the front row, and when the lights went out he had a flying start that immediately put him ahead of his fellow Alpine Academy member Piastri. At the same time, Ticktum took third from race two winner Richard Verschoor.

The order at the front remainded steady until the mandatory pitstops started taking place.

Ticktum passed Piastri by undercutting the Australian by one lap, while the third of Alpine’s juniors – Christian Lundgaard – lost a wheel after a poor pitstop. The ART Grand Prix driver had made his way to seventh, but dropped to last and with a penalty.

The pitstop drama wouldn’t stop there, with Charouz’s David Beckman getting a five-second penalty for an unsafe release.

Verschoor’s MP Motorsport team-mate Lirim Zendeli and Hitech GP’s Juri Vips temporally took the lead by running long with their first stint, and after they pitted with five laps to go Zhou slotted back into first place, followed by Ticktum and Piastri.

It was a quiet race thereon, but Zhou would be untouchable as he took victory by almost four seconds.

After a tense battle at the dying moments, Piastri held on to third ahead of Verschoor. The two drivers nearly collided on the penultimate lap, which no investigation was deemed neccessary for. They were followed by Piastri’s team-mate Robert Shwartzman, Virtuosi’s Drugovich and Vips.

After a difficult weekend, Williams junior Roy Nissany dropped down the field and finished 16th, while ART GP’s Theo Pourchaire started and finished eighth ahead of Zendeli and Carlin’s Jehan Daruvala.