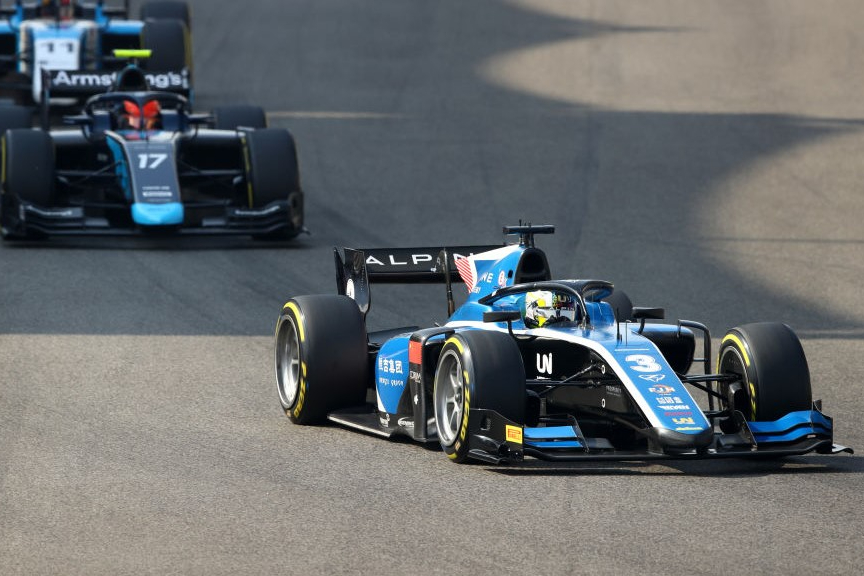 Guanyu Zhou took a comfortable win in Formula 2’s Abu Dhabi night race, after Marcus Armstrong retired from the lead due to a mechanical issue.

The race start was a hectic one, with lots of drivers going side-by-side out of the reprofiled turn five. A very aggressive and newly crowned Oscar Piastri went deep in the brakes into the corner, forcing Hitech GP’s Liam Lawson to go off.

Piastri was handed a five-second time penalty, but it was without effect when another incident happened later in the race.

On lap four, the safety car had to be deployed to recover Alessio Deledda, who at the back of the field had been spun around by a diving Olli Caldwell at turn nine. The race resumed at the end of lap six with DAMS’ Armstrong leading from Zhou, who had overtaken front-row starter Boschung on lap three.

Green flag conditions didn’t last long as DAMS’ Roy Nissany went very deep into turn nine in an attempt to regain the places lost at the chicane that splits the back straight, and ended up colliding with Piastri who then hit Hitech’s Juri Vips. Both Piastri and Vips retired as a consequence, and the incident was investigated post-race.

The safety car came in at the end of lap 10, and Armstrong began the next lap by pulling to one side due to a mechanical issue. This left Zhou as the new race leader just before the VSC was deployed as Armstrong’s car was recovered.

Shwartzman passed Boschung for second place as racing resumed on lap 12, but Zhou had already escaped and was on course for victory. With his win, Zhou is now 17 points behind Shwartzman in the fight to be title runner-up.

On lap 16 of 23, Zhou’s team-mate Felipe Drugovich pulled a brilliant move on race one winner Jehan Daruvala around the outside of turn nine. Drugovich had stronger pace in the closing stages, tracking down Daruvala’s Carlin team-mate Dan Ticktum in the last two laps but not being able to pass as the Briton went elbows out to held on to fourth.