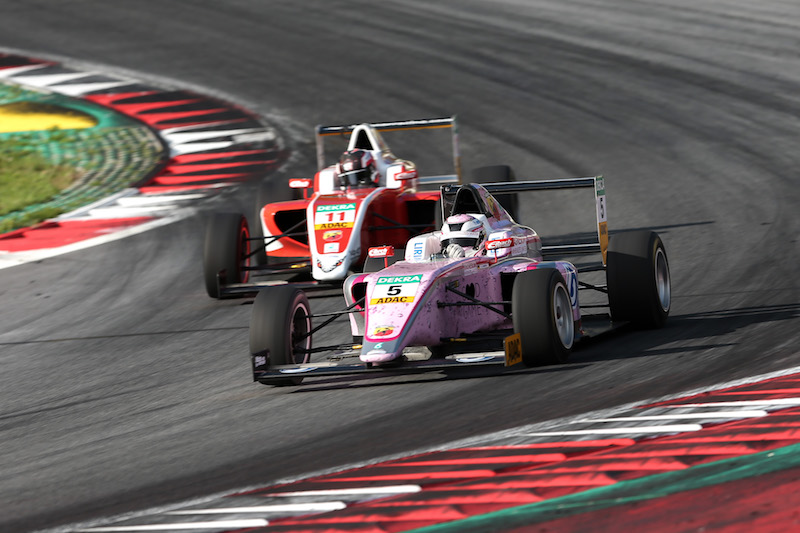 Race winner Lirim Zendeli and rookie champion Mick Wishofer have joined David Schumacher in the US Racing line-up for the 2018 ADAC Formula 4 season.

The team co-owned by Schumacher’s father Ralf and former Mercedes DTM chief Gerhard Ungar will also field Czech driver Tom Beckhauser as part of a tie-up with new Formula 2 entrant Charouz Racing System, and will race under the US Racing – CHRS banner.

German-Albanian driver Zendeli joins the team after two years in the series with Mucke Motorsport, having taken three wins and finished fourth in the 2017 standings behind title protagonists Juri Vips, Marcus Armstrong and Felipe Drugovich, who have all graduated to Formula 3 machinery for this year.

Austria’s Wishofer (pictured behind Zendeli above) beat Charles Weerts to the rookie crown last year while driving for the Lechner team, and scored a solitary overall point in the last race of the year at Hockenheim.

Beckhauser finished bottom of the standings with Mucke in 2017 in his first season in racing, but did win a race and come third overall (just behind Schumacher) in F4 UAE over the winter.

The US Racing quartet features in a 19-car entry list revealed by the series on Monday.

A second 2017 race winner will return in the form of Frederik Vesti, who remains with Van Amersfoort Racing after coming seventh last term.

Its Formula 3 rival Motopark is absent from the entry list.

Timo Rumpfkeil’s squad ran Joel Eriksson to second in the 2015 standings before taking the Swede to F3 success, but failed to win a race in F4 last season.

There are three Prema entries named for Ferrari juniors Enzo Fittipadi and Gianluca Petecof, as well as Olli Caldwell, while the team has pledged a fourth car at selected rounds for Red Bull protege Jack Doohan.

Andreas Estner has been joined at Neuhauser Racing by his younger brother Sebastian, who steps up from karting.