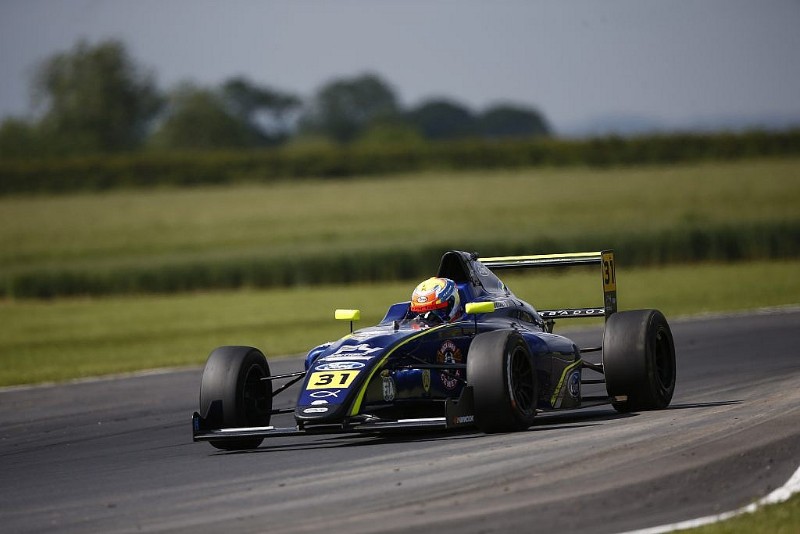 Zane Maloney claimed his third consecutive British Formula 4 victory in race one at Croft, moving into second in the standings.

The Carlin driver led lights-to-flag, maintaining a steady gap between himself and fellow front-row starter Sebastian Alvarez throughout the race.

His third win of the year puts him two points behind Alvarez’s Double R Racing team-mate Louis Foster in the championship standings.

Alvarez enjoyed a strong race, remaining close to Maloney throughout, but was handed a 10-second penalty for jumping the start, dropping him to fifth in the results.

The rest of the race became a battle against JHR Development?s Josh Skelton, who was running at the back of a five car train in the fight for third on the road.

Arden?s Bart Horsten snatched third off the line, passing Foster before the first corner. He couldn?t shake the championship leader off and spent most of the race with Foster and his Arden team-mates Tommy Foster and Alex Connor on his tail.

In the second half of the race, Horsten began to pull away, and the four remaining cars split into two battles, with Tommy Foster trying to find a way past Louis Foster, and Connor with Skelton on his tail.

Horsten finished second, his best finish since his victory at Donington Park, ahead of Louis and Tommy Foster.

At the start of the final lap, Alvarez was running just behind Skelton on the corrected timings, but a final fast lap moved him ahead of the pair. Skelton passed Connor on track on the final lap to move up to sixth, putting himself on pole for race two.

Roberto Faria enjoyed a strong start and spent the race battling against Joe Turney and Luke Browning. He held the position to finish eighth, with Turney passing Browning for ninth in the closing stages of the race.