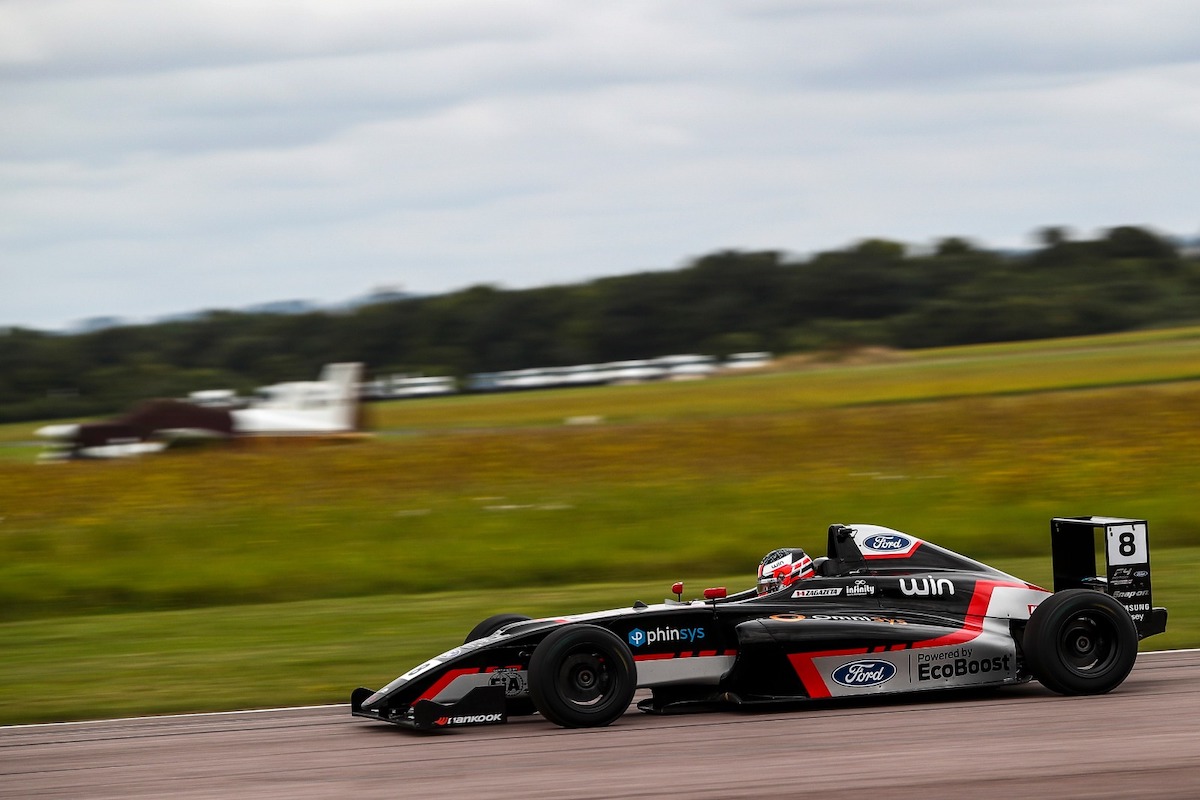 Mattias Zagazeta led Oliver Gray to the chequered flag in a dramatic ending to the opening British Formula 4 race of the weekend at Thruxton.

Zagazeta and Gray had been swapping places throughout the race, but it was Gray leading when the two approached the Club Chicane for the final time.

Zagazeta tried to make a move but, with nowhere to go, he clattered over the kerbs and missed the chicane as he went airborne. It was the second time during the race he had run off track while trying to make a move.

On this occasion there was no time for Gray to reclaim the position before they took the chequered flag. It’s not clear if Zagazeta will get to keep the race win.

The two had made a good start and pulled clear of the rest of the field after Zagazeta took the early race lead from Gray. But they were brought back into the mix when a safety car was brought out just before the halfway mark.

Joseph Loake had spun while battling in the mid-pack, and James Hedley ran wide to try to avoid him only to make contact with the barrier and spin himself. It brought an early end to both their races.

When racing resumed with 11 minutes left, the battle for third resumed and Zagazeta and Gray were once again able to escape up the road as they battled for position.

In the fight for third, McKenzy Cresswell was leading when the safety car was brought out, ahead of Eduardo Coseteng and Abbi Pulling.

Coseteng and Pulling immediately resumed the fight when the track turned green. Coseteng pulled alongside Cresswell, while Pulling tried to make a move around the outside and ran over the kerbs.

Pulling managed to find a way past Coseteng and was soon alongside Cresswell, making the move stick late in the race to come home third. Cresswell took fourth while Coseteng came into the pits with an apparent mechanical problem.

Behind them, Matthew Rees and Joel Granfors came together. Granfors narrowly avoided hitting the barrier as he was spat off, but both drivers were able to continue, albeit down the order. Granfors came eighth while Rees finished just inside the points in P10, and is now one point behind new leader Zagazeta in the championship.

Aiden Neate took fifth and was closing in on Cresswell when the chequered flag fell. He finished just ahead of Dougie Boulger and Tasanapol Inthraphuvasak.