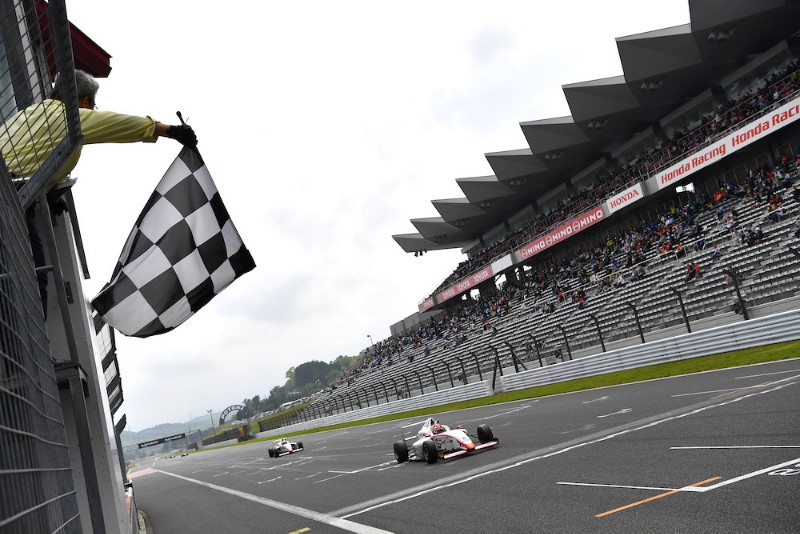 Two wins at Fuji for Honda Formula Dream Project driver Yuki Tsunoda has lifted him from fourth to first in the standings.

Tsunoda was the quickest driver in the opening round at Okayama, but got punted out by HFDP team-mate Takuya Otaki on the first lap of the first race. He made up for it with a dominant victory in the second race, putting him fourth in the championship.

He started the weekend at Fuji with pole, a more challenging task than usual due to low lying fog and a wet track. The weather improved for the race, in which Tsunoda found himself under pressure from team-mate Teppei Natori.

The pair quickly broke away from the battle for third, led by TOM’S driver Kazuto Kotaka.

Tsunoda couldn’t break away from Natori, who beneffted from the slipstream on the long main straight to look to the outside of Tsunoda at Turn 1 on the fifth lap of 15. That proved to be his best chance of victory, as Tsunoda replied by building an eight tenth gap, which Natori spent the rest of the race wittling down sat in the mirrors of the leader.

He was just too far away to attempt a late braking move on the final lap, and Tsunoda crossed the line to take victory, and move himself up into second place in the standings, only behind Natori.

Pole position was once again Tsunoda’s for the second race, but it was Natori who got the better start and led into the first corner.

The two HFDP drivers ran side-by-side until they reached Coca Cola corner, where Tsunoda was later on the brakes and reclaimed the lead.

Natori locked his brakes while going for the lead into Turn 1 on the second lap, bringing him under pressure from Kohta Kawaai. It took a few laps to shake off the?Le Beausset Motorsports driver, and he hunted down Tsunoda again.

At halfway distance Natori was right on the leader’s tail, and he briefly got a wheel ahead by taking a tight line through the final corner.

He got a wheel in front again at Turn 1, but Tsunoda held on to first place at the exit. Natori repeated his final corner move on that lap, with the same results, and was still in second come Turn 1, now with Kawaai just behind.

At Coca Cola the front two almost made contact, giving Kawaai a run on Natori through the next few corners. He lost second at Dunlop, but regained it at the final corner as two more drivers joined the podium fight.

They ran four wide going into Turn 1, with Natori being shuffled down to fifth but moving straight back to second having being the only one to make the corner cleanly.

Kotaka, third in the first race, demoted him to the final podium spot with two laps to go, and Natori met the chequered flag in fifth after losing out in battle on the last lap. To add to his misery he was handed a 40-second penalty for his racecraft while staunchly defending second place.

Tsunoda ended up taking a five second win over Kotaka, ahead of Togo Suganami, Kawaii and Reiji Hiraki, who inherited fifth.