written by Bethonie Waring 6 May 2018 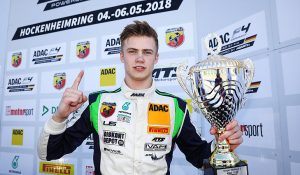 Austrian Mick Wishofer took his first car racing win in the final ADAC Formula 4 race of the weekend at Hockenheim, as Lirim Zendelli charged through the field to finish third.

Wishofer started alongside Niklas Krutten on the front row of the grid and immediately set about challenging for the lead. Krutten defended well in the early stages of the race, but the US Racing driver managed to find a way through. As soon as he claimed the lead, Wishofer put some air between himself and Krutten, eventually finishing 5.5s ahead.

Krutten finished in a comfortable second to take his best result of the season, 10 seconds clear of Zendeli.

Championship leader Zendeli had started eighth on the grid but struggled to make progress in the opening laps as Liam Lawson put up a strong defence. Zendeli made a number of attempts to pass the Van Amersfoort driver, but Lawson made his car wide and held onto fifth until the second half of the race.

Once past Lawson, Zendeli charged after Charles Weerts, who he managed to pass with much more ease. The following lap he passed Jack Doohan to put himself on the podium.

Weerts also overtook Doohan in the closing stages of the race to take fourth.

Having dropped back to sixth, Lawson led a four car battle for the position, with David Schumacher, Frederik Vesti and Enzo Fittipaldi on his tail. Joey Alders had been part of the battle early on in the race but dropped down the order after contact with Leon Kohler. Schumacher was also taken out of the fight when he served a drive through penalty for exceeding track limits.

In the final laps, it was Fittipaldi putting the pressure on Lawson, eventually finding a way past around the outside of the hairpin on the final lap to take sixth.