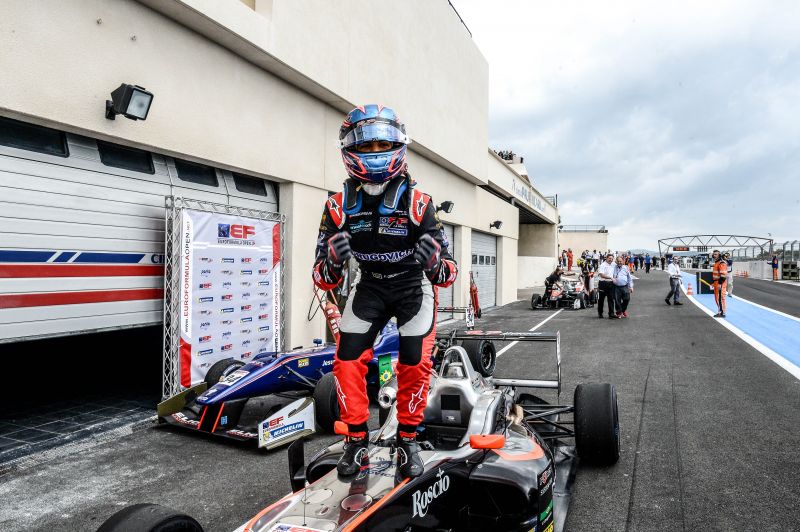 Felipe Drugovich set a rather ominous message to the rest of the Euroformula Open field at Paul Ricard after taking a dominant double victory.

In 2017, RP Motorsport’s Harrison Scott won both races at Paul Ricard by a net total of 7.420 seconds, and had a tally of 97 points after winning three of the first four races.

Drugovich, his effective ‘replacement’ at RP, took both 2018 wins by a combined margin of 17.956 seconds, and has two more points than Scott did at this point in the season.

The Brazilian started the weekend with pole, by nine tenths, but actually lost the lead at the beginning of the first race.

Bent Viscaal, who had starred during the two Winter Series races at Paul Ricard, swept past Drugovich at Turn 1, but the Brazilian was back ahead two corners later.

Benyahia was the first casualty of the scrap for second, failing to make it to the end of the first lap, with Viscaal somehow staying in position for the first two laps.

The lead already stood at 3.7 seconds by this point, and extended to 10 seconds over the remaining 13 laps.

Viscaal remained under pressure from Iorio for several laps, before the Brazilian started to drop back at around half distance.

This gave the Dutchman a comfortable second place, with Iorio taking his first EF Open podium at a track other than Estoril.

Samaia and Aldo Festante finished fourth and fifth for RP, with Carlin’s Cameron Das just behind.

Alex Karkosik failed to set a lap in qualifying, but battled his way up to seventh in his first race for Campos Racing.

Estoril winner Marcos Siebert spent most of the race locked in battle for eighth, which he beat Drivex School pair Jannes Fittje and Christian Hahn to.

Drugovich and Viscaal were separated by nine tenths again in qualifying for the second race, but a penalty from the first race meant the latter started in third behind Iorio.

Samaia challenged Iorio at the start, leaving Drugovich free from attack and able to stretch out a 1.8 second lead by the end of the first lap.

He only extended it to 7.8 seconds this time, but with Carlin drivers Iorio and Das completing the podium, and title rivals Siebert and Viscaal in sixth and seventh, it arguably did more for his title ambitions than his race one triumph.

Iorio is now second in the standings, a rather sizeable 42 points behind Drugovich.

Samaia beat Karkosik to fourth in the race, with the latter taking his best result of a disappointing season so far.

Benyahia made up for his race on exit with eighth place, ahead of Fittje and Festante.