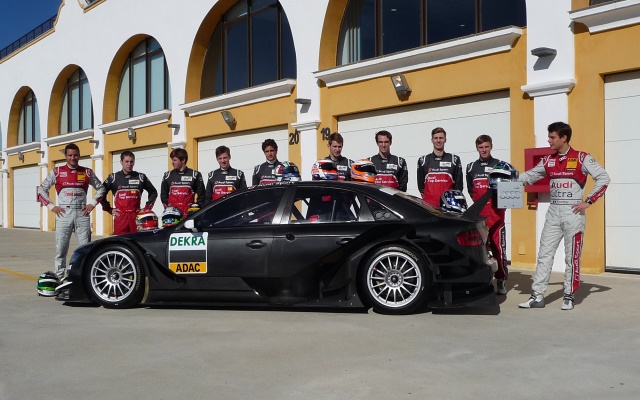 Robin Frijns, Jordan King and Marvin Kirchhofer were among a crop of young drivers who took part in a DTM test with Audi this week.

The three-day event at the Monteblanco circuit in Spain allowed eight prospects the chance to get behind the wheel of a previous-generation A4 DTM model.

2012 Formula Renault 3.5 champion Frijns led the octet, with King and Harry Tincknell invited as the best-placed Volkswagen-powered drivers in the FIA F3 European Championship this year.

Kirchhofer, who won the German F3 Cup in a Volkswagen-propelled car, was joined by fellow German youngster Stefan Wackerbauer, who won the Formula BMW Talent Cup in 2011 and was part of the Red Bull Junior Team last year but had a limited programme in Eurocup Formula Renault 2.0 this season.

Also present was Alessandro Latif, who competed in the Eurocup last year and has this year won in the Speed Euroseries prototype series, as well as Superstars GT champion Thomas Schoffler and VLN driver Ferdinand Stuck.

DTM regulars Timo Scheider and Adrien Tambay were on hand to support the young drivers.

?We regard this talent scouting event as an investment in the future,? said Audi’s DTM chief Dieter Gass.

?We?re absolutely happy with our current driver line-up but would still like to give young talents an opportunity to take a peek behind the scenes of the DTM from time to time. This is how some of our current drivers got started as well and today they?re part of the DTM or other series.?