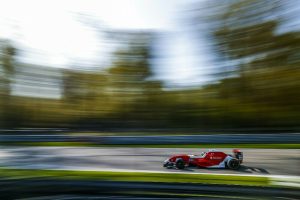 Ye was in the second group, while Paul Ricard winners Max Fewtrell and Logan Sargeant were in the first.

R-ace GP driver Fewtrell looked to be the pacesetter in the first session, although only just as he held an advantage of 0.001 seconds over Alexander Smolyar of Tech 1 Racing when the chequered flag was waved.

Italian F4 graduate Lorenzo Colombo used his local knowledge to better both after the chequered flag, with his time then being deleted and reinstated after he was believed to have exceeded track limits at the Parabolica, a mistake several drivers were accused of.

Sargeant could only manage eighth on his first visit to the circuit, meaning he will start the first race from 16th.

Ye had it more comfortable in his group, holding top spot by just under a tenth from MP Motorsport’s Christian Lundgaard before putting in several fast laps to dip into the 1m48s, four tenths faster than Lundgaard and almost nine faster than Fewtrell.

Eurocup debutant Christian Hahn didn’t set a time in the second group, and thus will start last despite being in the quicker draw.