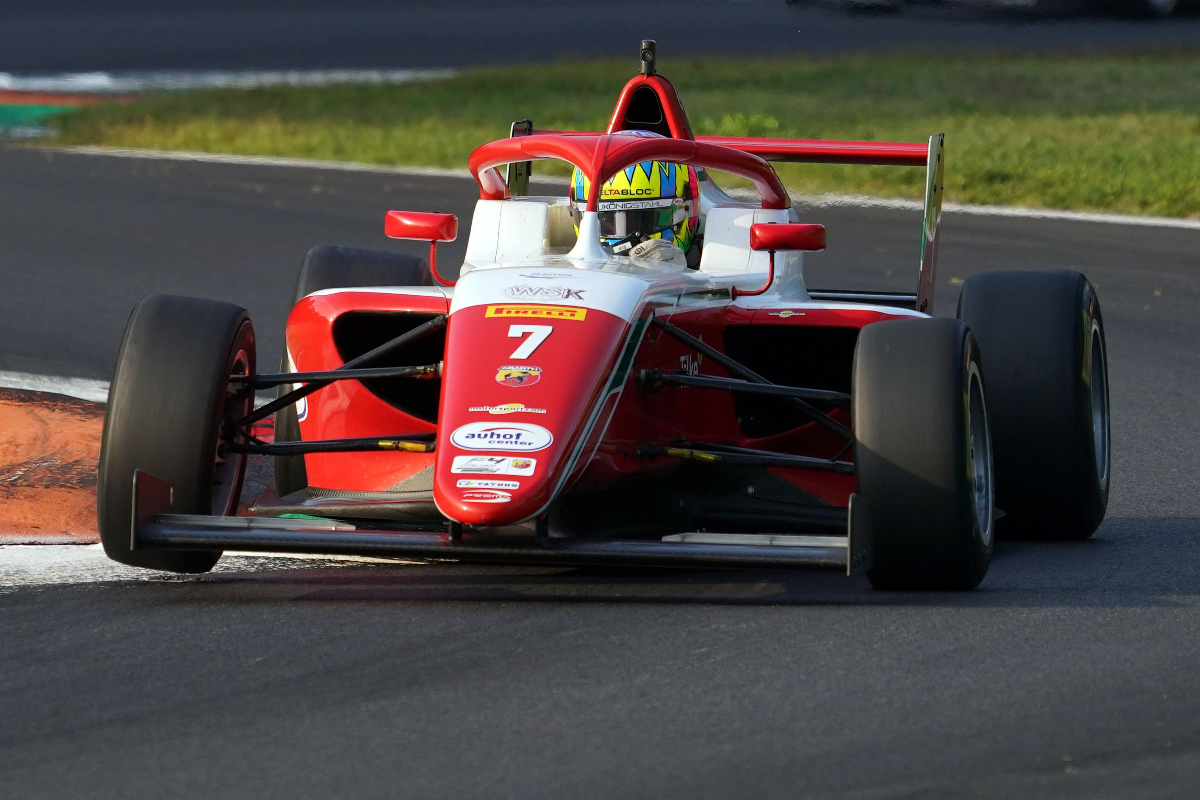 Charlie Wurz claimed his first Italian Formula 4 win in a chaotic race at Monza which broke the record for the series’ largest grid.

There were 44 drivers who started the first race of the weekend, but 16 of them did not make it to the chequered flag.

The first drivers to be eliminated were Hadrien David and Ruiqu Liu. On lap one, David spun at the Ascari chicane and then was collected by Liu. That caused the race’s first safety car period, and the second came as Giovanni Maschio spun at the same corner and Alex Partyshev stopped on track.

Niko Lacorte being spun at turn two and then being driven into by Jules Castro caused the third, and Brando Badoer retired in the pits on the lap that happened. The fourth safety car period was brought about by Valerio Rinicella running Ivan Domingues off at turn two, and then Domingues’s Iron Lynx team-mate Maya Weug getting involved and retiring too.

One lap of green flag racing took place after that, and there was even more chaos but Wurz held on to win.

Wurz had started from pole and had to hold Marcus Amand into turn one, while Rafael Camara swamped his Prema team-mate Andrea Kimi Antonelli off-track, resulting in him losing his front wing and having to pit.

Kacper Sztuka passed US Racing team-mate Amand for second at Parabolica following the first safety car restart, and on the next lap Martinius Stenshorne passed Camara and Amand at the first chicane.

Stenshorne was demoted back to fifth after the third safety car period as Alex Dunne passed at the della Roggia chicane and Camara went by at Lesmo 1, and Sztuka repeated his Parabolica pass on Wurz to take the lead.

Wurz was back ahead by turn one, but then they ran side-by-side a little longer before the Austrian restablished himself in first place. That enabled Dunne to home in on them, and he passed US team-mate Sztuka for second on the next lap before the safety car was summoned.

The last-lap restart was chaotic, as Nikita Bedrin and Conrad Laursen had a turn one altercation and James Wharton then crabbed out of turn two seconds later. That shook up the points positions, and Stenshorne had to take to the gravel. Bedrin then flew off track along with Georgios Markogiannis, and at the second chicane Nikhil Bohra, Zachary David and Stenshorne crashed out.

Arvid Lindblad, who had been in 13th, was suddenly up to sixth and he passed Taylor Barnard for fifth but had front wing damaged and dropped back to seventh to score his first points.

Further ahead, Dunne passed Sztuka at Parabolica to move into second in the race and the championship standings, with 47 points between himself and leader Antonelli who finished 11th.

Rishab Jain got a drive-through penalty in the race, and along with Alfio Spina and Jules Castro also recieved a 10s penalty post-race.