Will Stevens switches from Caterham to Marussia support 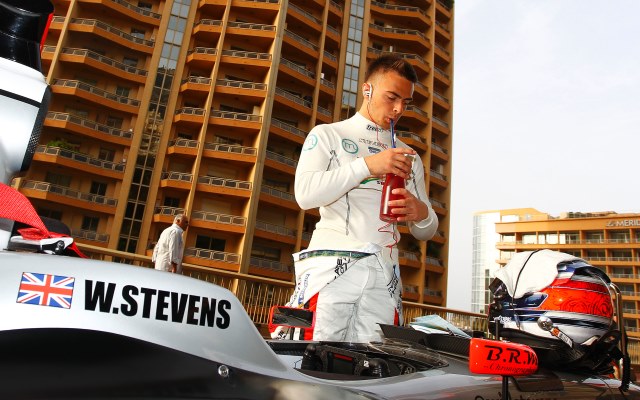 Formula Renault 3.5 driver Will Stevens has joined the Marussia Formula 1 team as a reserve driver, ending his previous deal with Caterham.

The British driver has previously tested F1 machinery with Caterham at the Silverstone mid-season tests in 2013 and 2014, but now follows Alexander Rossi in moving to rival outfit Marussia after Caterham’s change of ownership.

He had been poised to make his Marussia debut in free practice ahead of the Japanese Grand Prix on Friday, but was unable to do so after paperwork was not completed in time.

Stevens was previously signed by the Honda F1 team in 2008 when he was a top international karter, and then spent three years racing Formula Renault 2.0 machinery – culminating with fourth place in the Eurocup in 2011.

“I?m really thrilled to be given this opportunity by the Marussia F1 Team,” said 23-year-old Stevens.

“They are a great team, with enormous potential, and I?m so happy to be joining them at this exciting time in their development.

“Off the back of my F1 tests with Caterham, I can?t wait to get my first taste of the MR03. I?m looking forward to rewarding their faith in me and to making a positive contribution to our progress in the 2014 championship, and beyond.”

Team principal John Booth commented: ?Will is a driver we have been watching since he arrived in Formula Renault. We have admired his ability to learn quickly and compete in the thick of the action, so we are very pleased to add him to our roster of Official Reserve Drivers, which is now looking very strong indeed.

“It is great to be able to take such promising talents as Will and Alexander under our wing and help them progress to the next level. We look forward to seeing Will perform in the MR03, when I am sure he will demonstrate some further signs of his obvious potential.?

Marschall tops the timesheets in free practice at Hockenheim