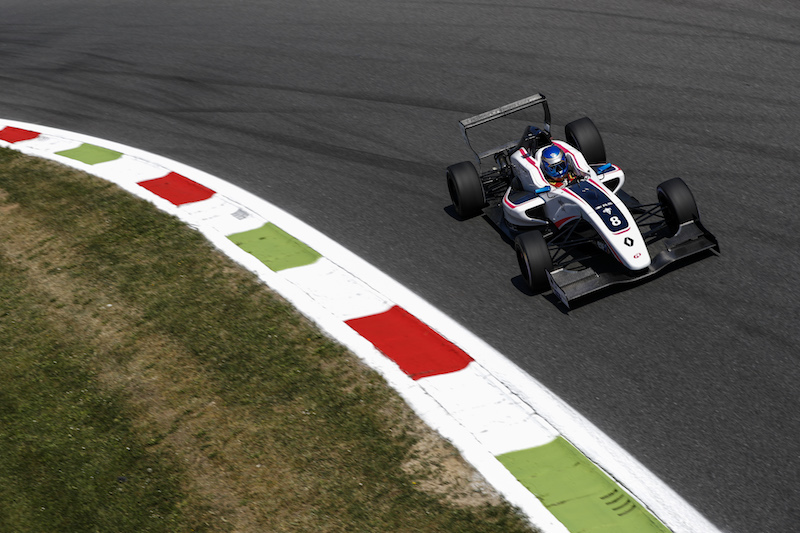 Will Palmer won the second race of the opening Formula Renault Eurocup?round at Monza as race one winner Robert Shwartzman collided with pole-sitter Gabriel Aubry behind him late on.

Palmer, who topped the slower first group in qualifying, got the jump on Aubry at the start to lead into the first corner.

The race went under safety car on lap two after Alex Peroni and Gabriel Chaves tangled over 14th at Curva Grande, and?only 12 of the scheduled 25 minutes were left once the race restarted.

Palmer was able to escape as Aubry came under attack, initially from Max Defourny who had a late look at the Frenchman at the first chicane but instead opened the door for Shwartzman and then Sacha Fenestraz to come past.

With two minutes left, Shwartzman attacked Aubry at the first chicane but made contact with the Tech 1 driver, breaking his car’s left-rear suspension against the front-right of Aubry and taking both out of the race on the spot.

This gave Palmer a two-second advantage over the battling Fenestraz and Defourny, which he extended to three seconds?by the chequered flag.

Fenestraz and Defourny swapped places no fewer than five times?after the restart, with the Franco-Argentine eventually getting his second second-place of the weekend?by 0.144s.

Palmer leaves Monza with the standings lead, one point ahead of Fenestraz.

After ending race one in the barriers to bring out the red flag, new Red Bull Junior Neil Verhagen came from 11th on the grid to finish?a fine fourth, beating an also-impressive Thomas Maxwell at the flag.

Former BRDC British Formula 3 racer Maxwell started fourth after coming second to Palmer in the first qualifying group, and briefly got ahead of Defourny for third on the first lap.

Yifei Ye and Richard Verschoor were also on the tail of Verhagen, while race one’s top rookie Max Fewtrell came from 15th on the grid to beat Alexander Vartanyan and Raul Guzman to eighth.

Dan Ticktum started ahead of his Red Bull stable-mates Verhagen and Verschoor in 10th on the grid but pulled up on the first lap.