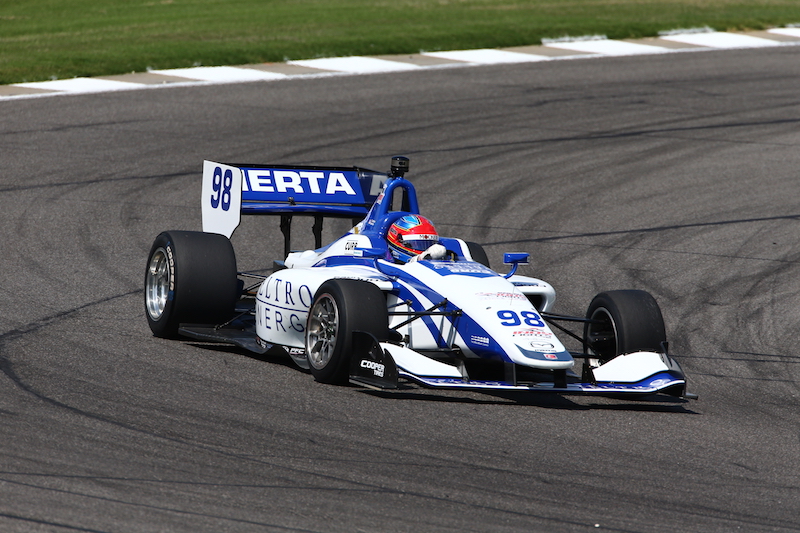 Colton Herta took a dominant second Indy Lights victory in race two at Barber Motorsports Park to extend his points lead, which had given him pole when qualifying was cancelled.

When heavy rain forced the earlier qualifying session to be called off it was championship points that put?Herta on?pole, but the rookie proved his superiority by driving away from the field.

Any attempt to escape was initially halted by a full-course caution on lap one after Zachary Claman De Melo tipped Pato O’Ward into the gravel at Turn 3, but Herta immediately built a gap over Kyle Kaiser at the restart.

Over the course of the 35-lap race, Herta – who celebrated his 17th birthday after winning on his debut weekend last month – increased his advantage to nine seconds.

Herta, who finished 10th in race one after tripping over Kaiser at a chaotic start, won?the 400th race?in the series his father Bryan won in 1993.

Kaiser came home two seconds in front of race one winner Nico Jamin, who got past fellow Pro Mazda graduate Aaron Telitz for third at the start.

Neil Alberico continued his strong start to the season with fourth after a lap-eight pass on Telitz, and finished within seven tenths of Jamin.

Dalton Kellett climbed from 12th to sixth on the first start but found himself shuffled back to 10th over the remaining distance behind Nicolas Dapero, Matheus Leist, Shelby Blackstock and Ryan Norman.

Last year’s runner-up Santiago Urrutia had to start ninth after his difficult start to the season, which continued when he made contact with the rear of Blackstock’s car soon after the restart, spinning and requiring a replacement front wing. He was the final finisher in 13th.