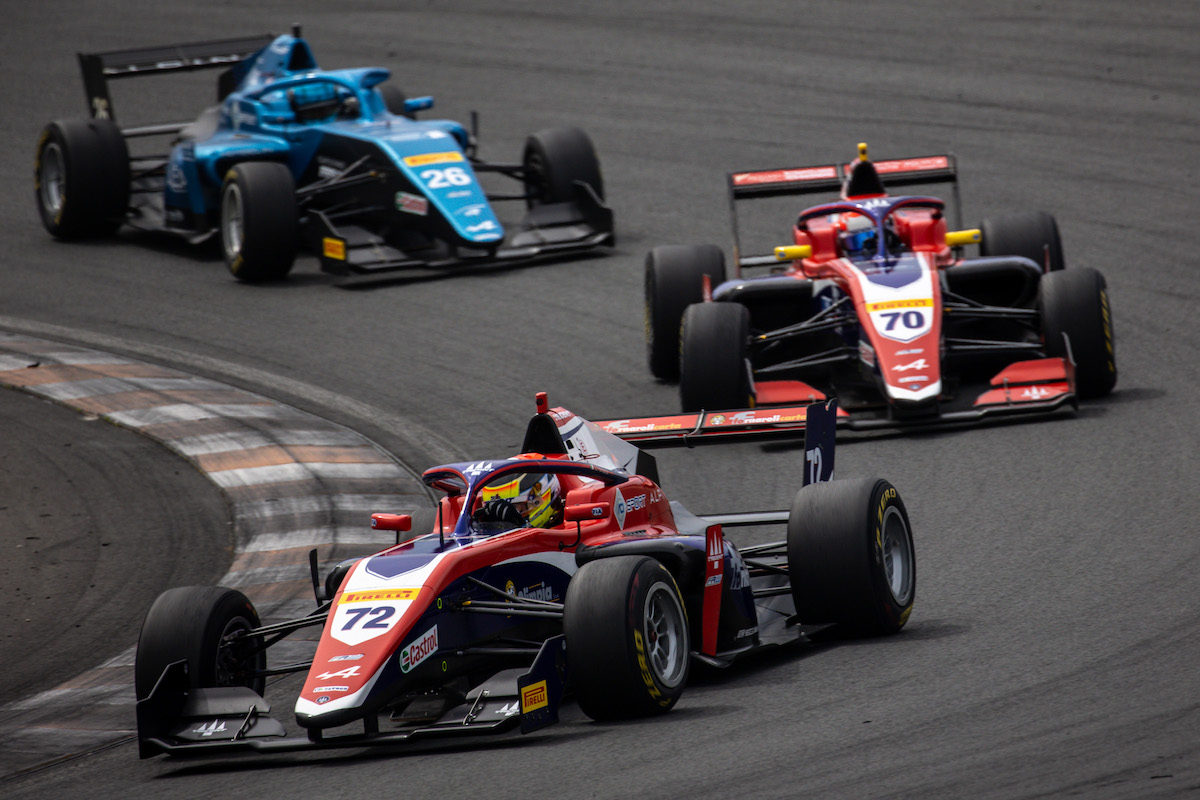 Already a champion outfit in FIA F3, Trident expanded into the Formula Regional European Championship for 2022 and the rookie team is chasing the rookie drivers’ title

With successes in both FIA Formula 3 and Formula 2, Trident was already a major force in junior single-seaters but the opportunity to add the Formula Regional European Championship by Alpine to their portfolio was too good to turn down.

Luca Zerbini, the man brought in by Trident to manage the project, explained to Formula Scout the rationale for the team’s expansion and the challenges of setting up and running a new team in such a competitive series.

The plan to expand into FRegional had been hatched by team owner, Maurizio Salvadori, and team manager, Giacomo Ricci, who now focuses on running Trident’s F2 and F3 teams.

“I met Maurizio Salvadori in, I think, January or February, and he told me that that was the idea,” recalls Zerbini. “And then at the end, I think it was last summer they decided to jump in.”

Zerbini had overseen Trident’s GP2 and GP3 teams from 2009 to 2014 before leaving to pursue other interests as diverse as driver management, GT racing and organising the Italian powerboat championship, “which is something really different.”

However, the chance to manage the FREC team was irresistible. “I got a call from Maurizio. He told me of this project and ‘mamma mia’!” he tells Formula Scout. “I came back just for this project.”

Trident acquired the assets of 2021’s bottom-placed team, JD Motorsports, although Zerbini says of the deal: “Actually it was just the entry, plus one engineer, who was there already, and one mechanic and, of course, all materials but to be honest, we started again with a lot of new materials, a lot of new things.” 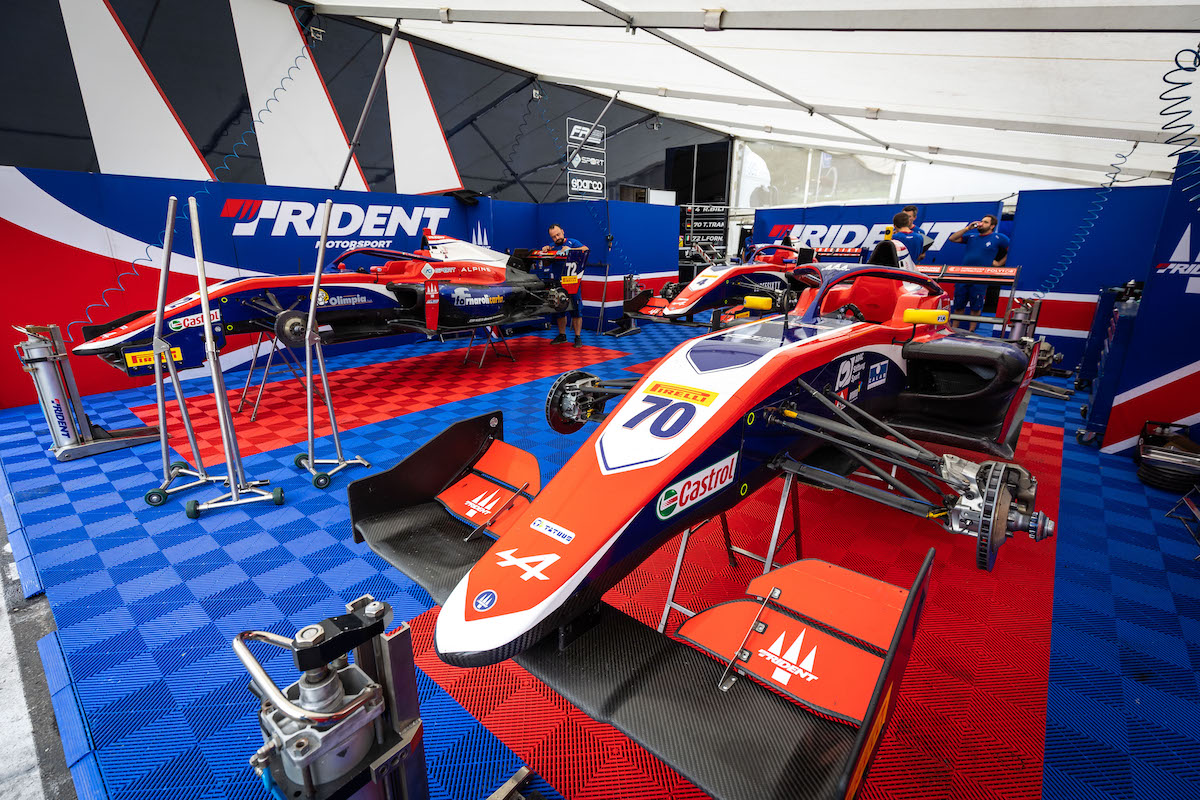 In conversation earlier in the season, Ricci explained to Formula Scout that the aim was to move the team up a notch: “I have to say that now we went higher with our method, our car development and, let’s say, our belief, in how to do the things and how to approach the racing.”

So why FREC and why now? “The aim is to create a path,” explains Zerbini. “In the perfect world the driver could arrive to Trident and start to work with us from Formula Regional to Formula 2.

“At the end of the day, you need to prepare drivers for the next step, which is Formula 3. If you’re able to start working with our method with the young drivers already in this category, it is a big benefit when you keep working with them in F3.”

For Trident, the addition of a FREC programme also benefits the other categories where the team is active.

Ricci confirms that expansion had always been part of Trident’s long-term plan: “Today, you must have inside the team at least three categories,” he says. A year ago, Trident moved into a new larger factory, adding both capacity and expense.

“The more categories you have, the more budget and resource you have in the team and the more development, also globally, you can carry on. And that’s important,” Ricci continues.

Maintaining this level of investment is not cheap. “We have our internal simulator, a proper machine that is very good for the drivers’ training and so on. But [this means] we need to have an internal engineer, full time dedicated only for the project. And then you need to invest into the correlation between the vehicle and the reality,” he explains.

The FREC project has leveraged the skills and talent within the organisation, something which both Zerbini and Ricci believe is crucial. 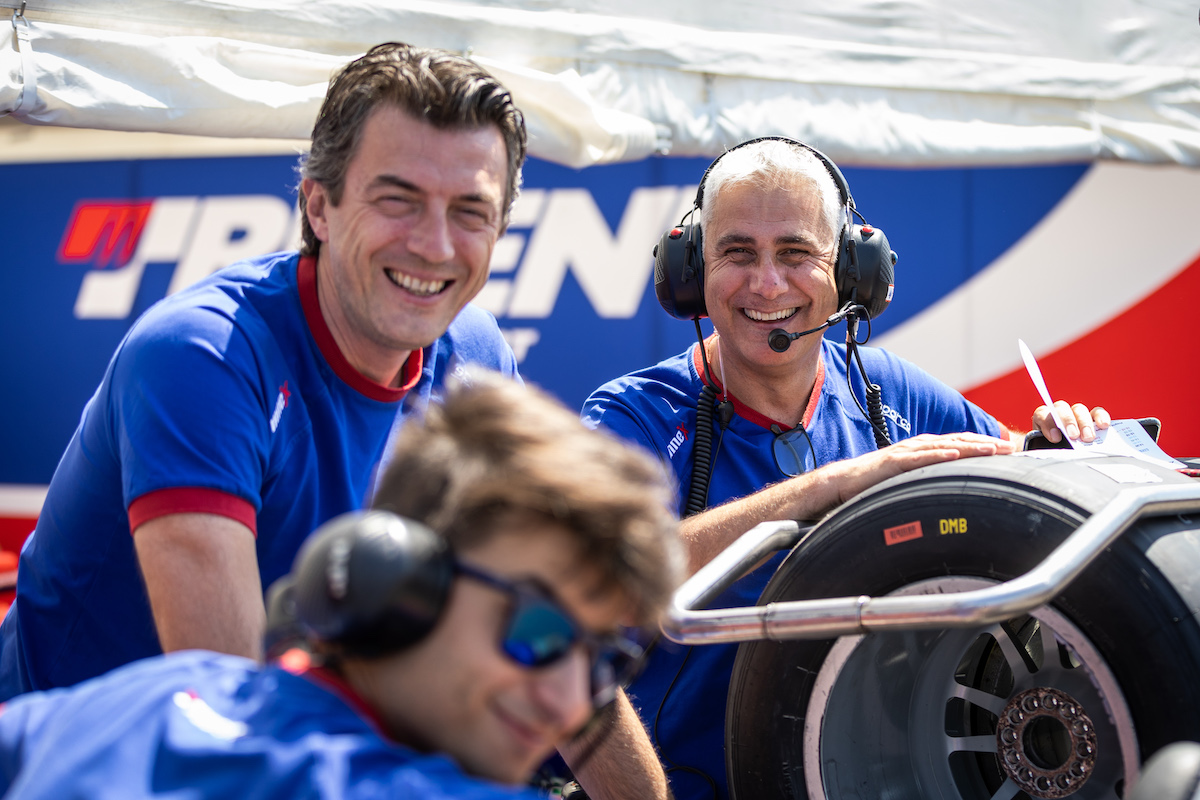 The project started “with the help of the F3 and F2 teams at home, so the engineers that are working now in the FRECA team benefited from working together with the geniuses in the other categories,” Ricci says.

Bringing together ideas from across the team meant “we were able to start with quite a nice level,” says Zerbini. And the FREC engineers benefit “because the common point between all the categories is the method.”

The “Trident method” is a term that crops up regularly in the comments of both men and is clearly an important part of the Trident philosophy.

“We work with a method that [we know] is working, because F3 proved that it is working. F2 is a little bit more complicated, but we are getting better there as well. And to use the same method in every category we are doing [is] for sure a benefit for everyone.”

Not surprisingly, Zerbini admits that building a team from scratch in a short period is not an easy exercise.

“It takes time to have the 100% but we are getting [there] very well, I think. Thanks to the people we have on board it seems quite easy to work together.”

Not only is Trident a rookie team but its three drivers – Leonardo Fornaroli, Tim Tramnitz and Roman Bilinski – are also in their first season in FRegional. Was that the team’s original intention? 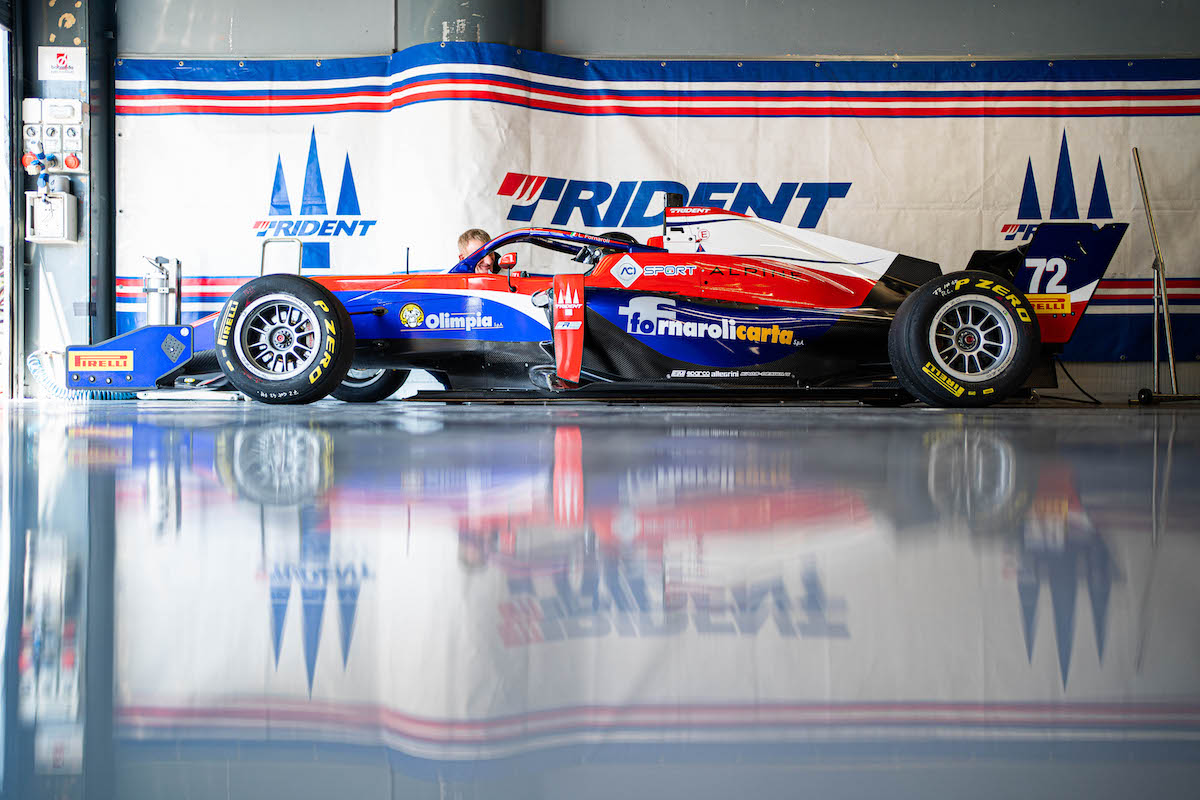 “To be honest,” answers Zerbini, “we were looking for an experienced driver but then we had a test with them, apart from Tramnitz who was not available but we knew his value, and to be honest, we were very happy after the test in Barcelona. They were mega quick [and] we worked very well together. So, we said, ‘Why not? Let’s try that,’ but at the end of the day, we are very happy.”

As the team and its rookie line-up have gained experience over the season, the results have started to come on a regular basis.

Italian Formula 4 graduate Fornaroli has been a consistent points finisher and leads the rookie standings with two rounds remaining, while Tramnitz, last season’s F4 runner-up in both Italy and Germany, has shown strong pace but has suffered more from mechanical gremlins and on-track incidents.

Anglo-Pole Bilinski has often been a match for his team-mates, taking two rookie victories so far in his first year racing out of Britain.

“Yes, we are three rookies,” adds Fornaroli, “but we are all three very fast. Every time we are in the top 10 and we are learning a lot.”

Zerbini has nothing but praise for the way that the three drivers are working with the team and supporting each other, creating a harmonious working environment within the Trident camp.

“When someone is lacking something, there is someone else giving his input and his help and vice versa. Maybe one can be more analytical, the other one a bit less, but the other one maybe is doing some corners better.

“Thanks to the good relationship they have in the team, which is a must, we are able to work very well with them and to share information with one another,” he says. 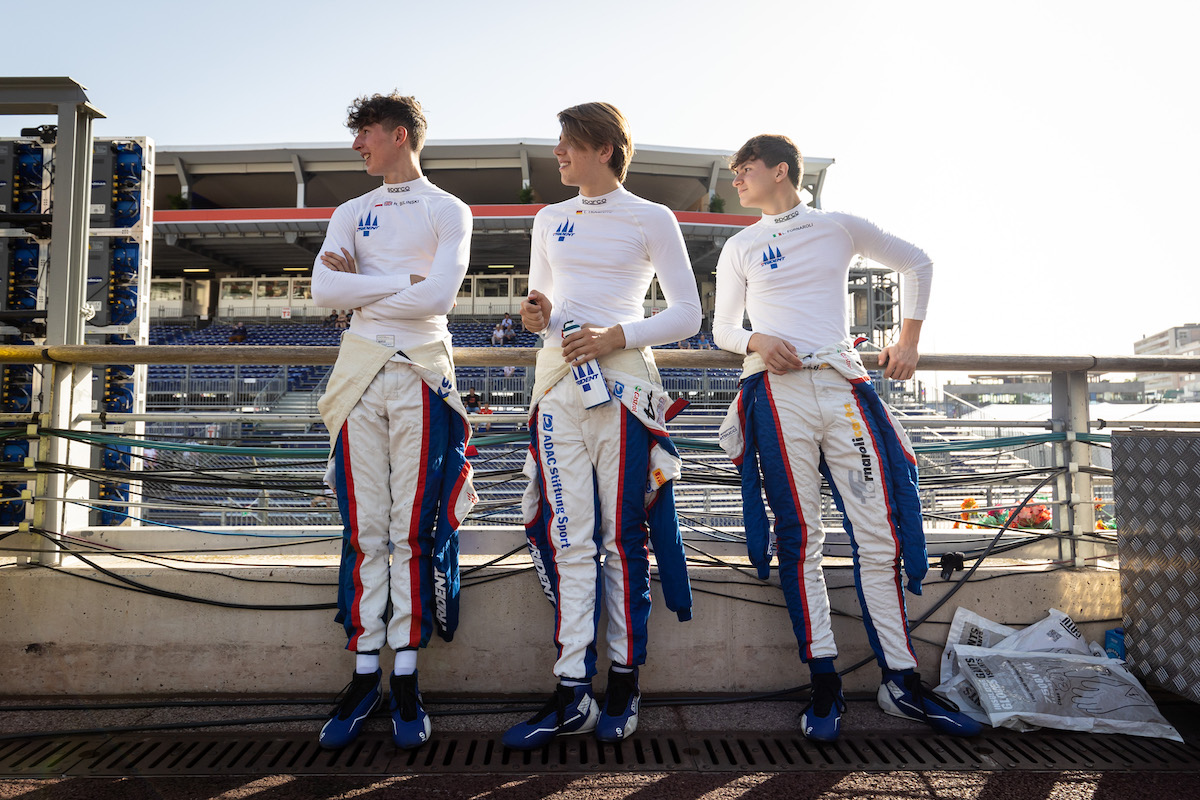 “I think we are all very competitive so of course you also try to be the fastest in the team,” says Tramnitz. “But we get along really well as well and, of course, we push each other. We are rivals on the racetrack but we also have a lot of fun in the paddock or when we are with the team in Italy.”

Though neither Tramnitz nor Bilinski have yet moved to Italy, “they spend a lot of time at the factory so they’re enjoying Italy as well,” jokes Zerbini, before adding, for the avoidance of doubt, that “they come there to work.”

With Fornaroli, who lives an hour from the factory outside Milan, “they have the time to enjoy life staying together there, at the same time to work in a very professional way because we do quite long days, meetings, simulator, more meetings, gym.”

The team’s awning is one of the most welcoming in the paddock, even by the friendly standards of FREC. Zerbini is a hands-on manager, usually to be seen surveying work out front, and the drivers are at ease in each other’s company.

“We have a very good team, with the engineers we are improving the car from race-to-race, and Luca [Zerbini] is one of the best managers that I’ve ever seen,” enthuses Fornaroli.

Tramnitz, in his first season with a non-German team, is “enjoying working with this team, it feels like home,” even joking that he is “getting more and more Italian now!”

As a new team to the category, expectations were muted before the first round. “FRECA is tough. You have 36 or 37 very good drivers, all in very professional teams,” says Zerbini, so “it was difficult to think about goals before the start of the season.”

The team has “put a lot of effort in this category” and is not about to sit back and relax. “And now that we see how it’s working, the potential is to be in this position, or even better.”

“We need to improve because, at the end of the day, we want to be always at the front,” Zerbini says, “but, considering that we are new in the category with three rookies, I have to say that maybe the potential we have on the table could be even better than what we are doing at the moment.” 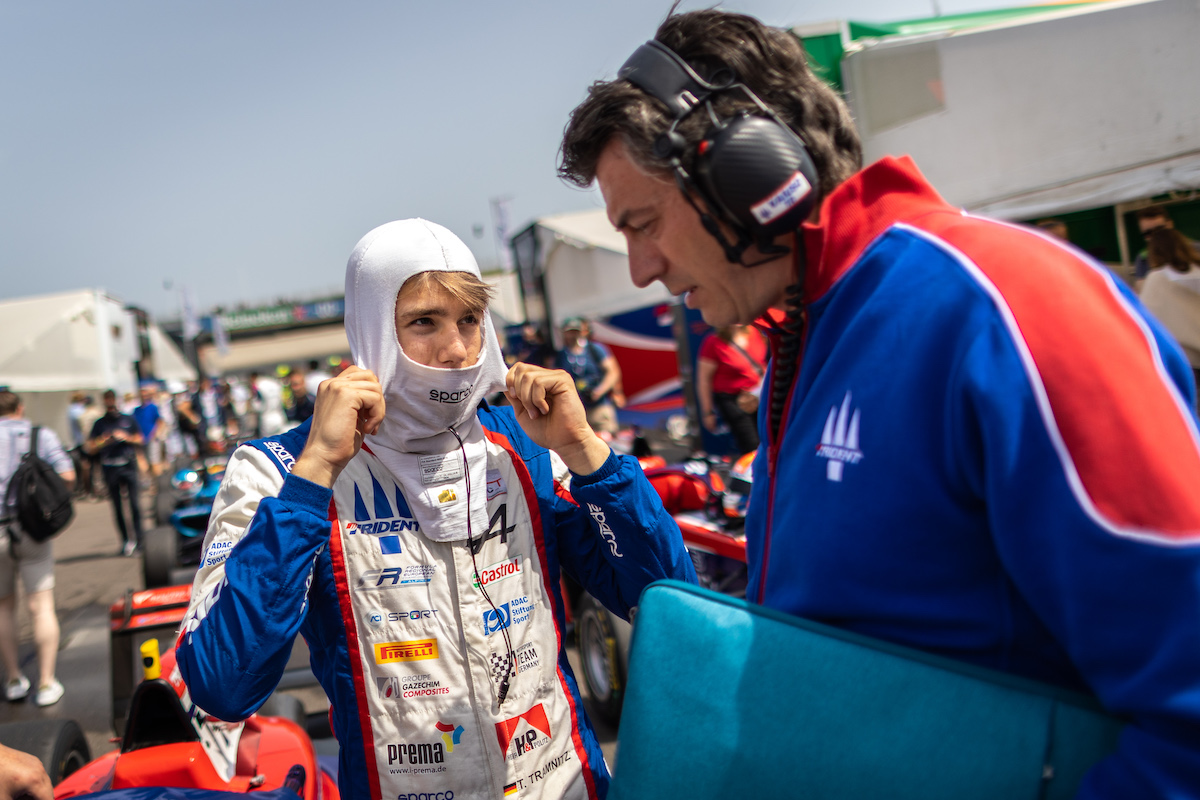 Zerbini is reluctant to make bold predictions or set targets. “Don’t forget that we are Italian, so we are very superstitious!” he says, laughing.

Logically, the team’s sights are on the rookie title for this season although Zerbini knows “it’s not easy. There are some very good rookies there.” And the fact that his trio of drivers are so evenly matched means that the points have been split between them rather than “just one taking the same points every race.”

What does the future hold for Trident, in FREC and beyond? Could we see a further expansion of the stairway of talent into F4, for example?

Zerbini laughs, anticipating the question: “At the moment F4 is not in the plan. Now we need to consolidate FRECA. After that we will see.”

For FREC in 2023, “of course, we would like to go ahead with the drivers we have at the moment,” he tells Formula Scout, “because when you start with drivers it’s also very nice to have them the second year [to] get the benefit of them having one year experience.”

“Honestly, at the moment, the relationship with them is very, very good. So, I would like them to stay to but for sure next year we would like to have at least one driver with some experience.”

And with FRECA now established as the first rung on Trident’s ladder to F2 and beyond, if a driver does move up to FIA F3, then Trident would be only too happy to keep them in the family.

With Fornaroli having spent all three days of the recent Jerez test in the team’s #1 F3 car, it appears that such a desire could soon be realised. 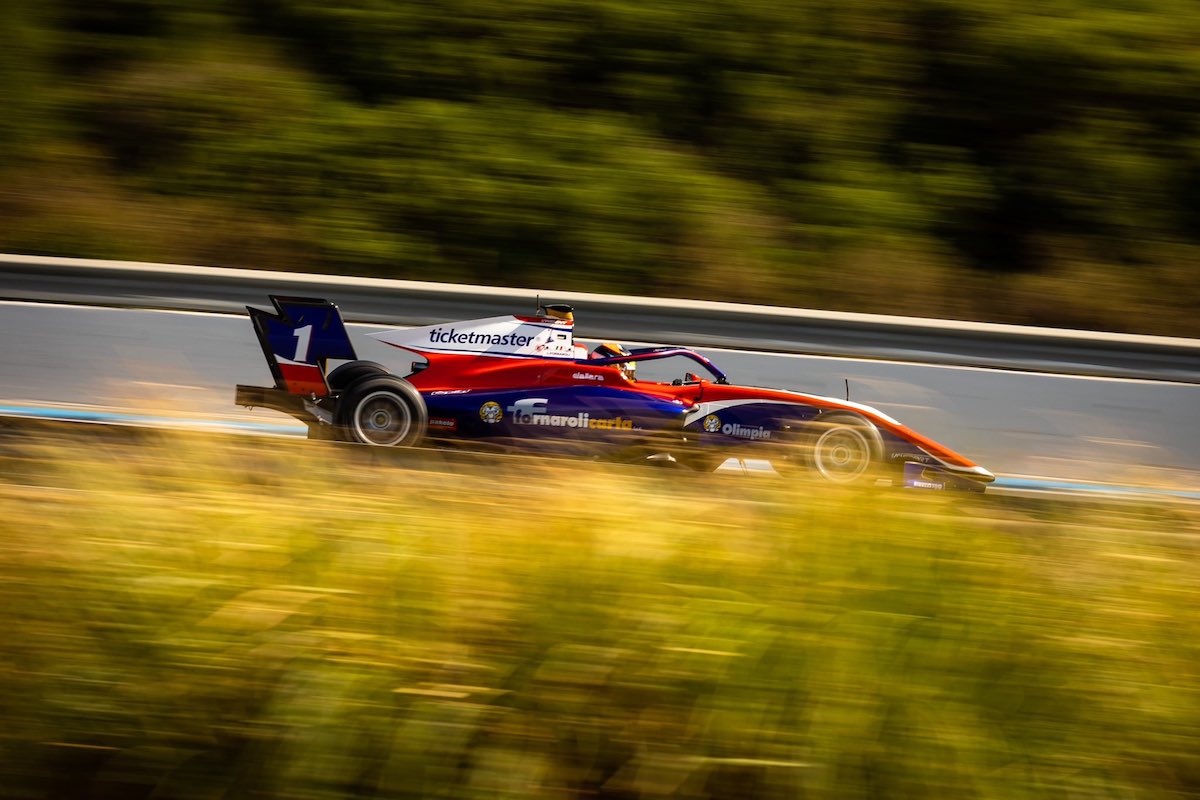