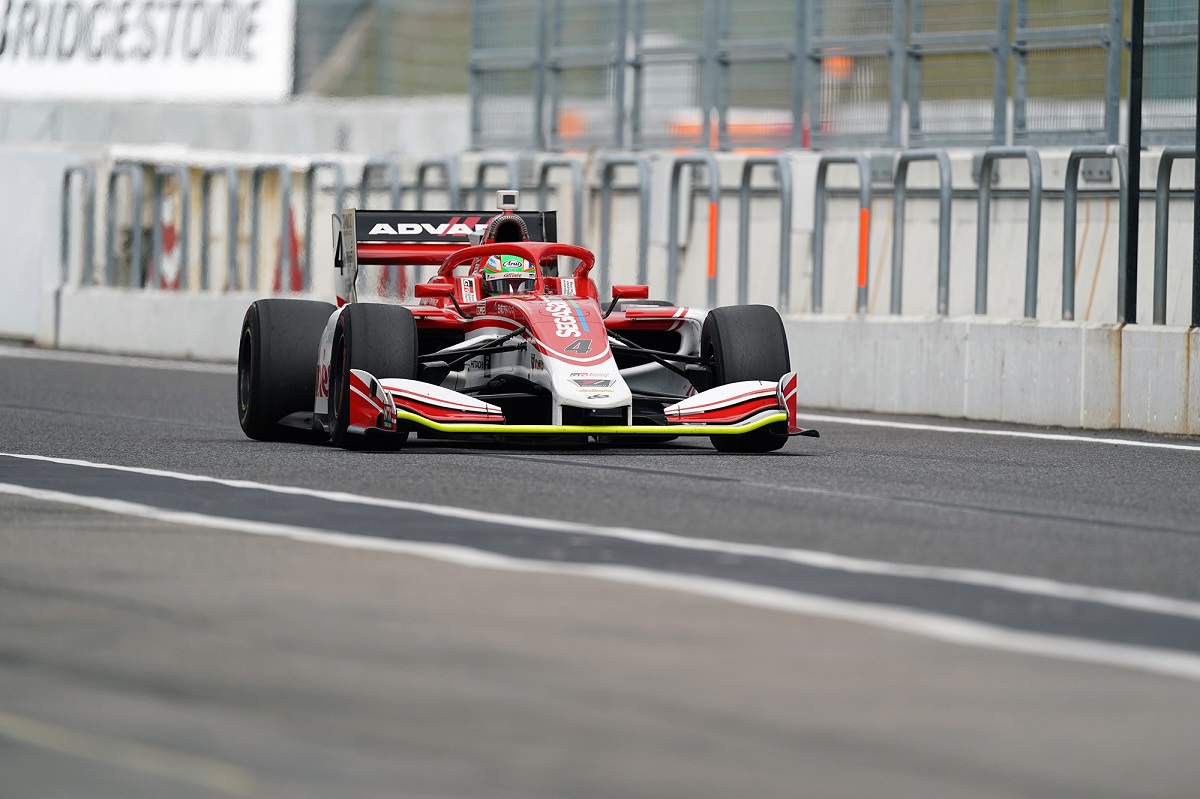 Deemed a failure by Renault, Sacha Fenestraz responded by moving to Japan and becoming Toyota’s new single-seater hope. He’s set to star in Super Formula this year, and his Formula E test is serious business

Success in Japan may come cheaper than in Europe, but it certainly does not come quicker for most drivers. The quality and quantity of the national competition in all its motorsport categories is so saturated that the accumulation of experience is crucial to success. Some drivers though, who have missed the cut elsewhere, visit the Far East and tear up the formbook.

It will be very difficult for Sacha Fenestraz to emulate Ralf Schumacher in becoming Super Formula champion as a total rookie, given no other driver before or since was capable of the feat besides inaugural champion Motoharu Kurosawa – who had already raced cars of the same ilk in European Formula 2.

Fenestraz has already done the seemingly impossible once, as he dominated SF Lights (nee Japanese Formula 3) last year as a rookie with B-MAX Racing by Motopark. The German side of that operation was completely new to the series too. It wasn’t a series Fenestraz originally intended to race in, given he’d ended 2018 painfully losing his Renault Formula 1 junior status.

“[The deal to race] came about quite late. I got dropped by the Renault Sport Academy late in the year in Abu Dhabi,” Fenestraz tells Formula Scout. “So it was kind of made difficult for me to race again in Europe in the new FIA F3 Championship.”

After winning the 2017 Formula Renault Eurocup title, and earning his Renault patronage, Fenestraz joined Carlin in the final season of FIA European F3. He won in Pau during his debut weekend, but tyre struggles left him a disappointing 11th in the points. It was clearly a team-wide issue, and Fenestraz was often Carlin’s lead car, but it left the Franco-Argentinian exposed.

Fenestraz was already expecting his Renault dismissal, which subsequently was knocking his confidence, and he received the unwanted news while in the last of his two GP3 appearances for Arden in Abu Dhabi. One week before, while the cloud was still looming over him, he had put in a redemptive performance in his usual F3 car to finish third in the Macau Grand Prix.

“The budget was just crazy for FIA F3, and there was no possibility to race there. It was either stop [all together] or come to Japan. I was talking a lot to Loic Duval and Benoit Treluyer, other drivers who’ve been racing here. At the end of 2018, well, I was close to stopping motorsport because it was just a very difficult year for me. Luckily I didn’t give up and came to Japan.”

After a preliminary test in December 2018, Fenestraz signed with Motopark for Japanese F3 two months later and also bagged a Super GT3000 seat with Kondo Racing in a Nissan GT-R. Signing those deals was a confidence boost in itself, but Fenestraz was not convinced he’d have high expectations of the year – despite being at the front during pre-season tests.

“I wasn’t expecting to win the title at all. I arrived here in Japan with the B-MAX/Motopark combination, which was very helpful. But we knew that TOM’S, this famous Japanese team, was by far the best. They’ve been winning this series for the last 10 or 15 years I think. Everyone was saying they were unbeatable, they even started calling the series ‘TOM’S F3’ because they were winning everything, so that’s why I never thought I would be able to win [the title]. Maybe a race of course, but to win the title I never thought it was going to be possible. It was already a good start for the season with the first win at Suzuka.”

Third-year driver Ritomo Miyata breezed to pole for the season-opening race at Suzuka, but Fenestraz made it onto the front row and was ahead of Miyata before the first corner of the race. He held off the TOM’S driver for 12 laps to win. An unlucky clash between the two meant Fenestraz came last in race two, but at a wet Autopolis one month later it was made clear that the ball was firmly in his court for the season: three wins from three races and already more than double the points of Miyata.

“When I had that triple win in Autopolis, I had a good roll of the dice, it was going good. The three races I won there thanks to the rain, that helped me a lot for the confidence and as well as for just scoring as many points as possible. So I think it was there, or a little bit later in the season as well, but [after] Autopolis I was like, ‘we’ve got a chance to win or at least battle for the title’.”

The extra points for pole and fastest lap were crucial in a series that otherwise only awards points to the top six finishers. It took a while for Miyata to truly strike back, but the pair still enjoyed on-track battles in between. A fourth season in the series has already been confirmed for Miyata, but he’s also being linked to the TOM’S seat of reigning champion Nick Cassidy in SF.

Fenestraz ended the season 20 points clear (the equivalent of two race wins), a margin that would have been just one point had Miyata not been the recipient of two technical disqualifications for what Fenestraz believes to have been illegal rear wing end plates.

“It was a very good year to battle together, very clean racing – well, Japanese-style racing is very very very clean… of course it’s not nice to see that [the disqualifications] happen, but the rules are the rules.”

That such an experienced combination was introducing technical innovations and still being beaten by Fenestraz, whose team-mates and many of the engineering team were also new to Japanese racing, shows how an against-the-odds success could be repeated in SF – especially at Kondo Racing.

Cassidy, another whose junior career got stifled in European F3, established his racing future with the Japanese F3 title at TOM’S and was the only foreigner other than Fenestraz to become champion in the last decade. He then joined Kondo in SF, and had netted a podium and a pole in his first season. The previous time Kondo had such results as a two-car effort was 2008.

Future F1 and Formula E stars Pierre Gasly and Felix Rosenqvist were the stars of the rookie crop in 2017, but by sticking with Kondo for a second season (as well as committing to Lexus’s Super GT line-up with TOM’S) it put Cassidy in a prime position to become one of Toyota’s biggest assets in the domestic racing scene. In both series he missed title success by the smallest of margins, but in 2019 he was rewarded with Red Bull patronage and moved to TOM’S to win his much-desired SF title.

Fenestraz is now effectively sitting in the same position, while Cassidy hasn’t confirmed his SF return as he eyes up the opportunities abroad that have opened up due to his performances in Japan. There’s every chance Fenestraz could do the same once he’s a frontrunner in both championships, and has already impressed Kondo during its Super GT300 debut last year. He took a pole and a podium which was nearly a win, and built up an appreciation of the circuits he’ll return to in 2020.

“It’s a lot more old school here, which I really love. It’s not like Paul Ricard where you go off and there is no problem. Here, it?s you go to 90% of the tracks, if you go off it’s straight into the barriers or the gravel. It’s good that they keep it like that. Of course there’s one or two tracks like Suzuka or Fuji that’s a bit different, but it’s still very nice tracks here.”

When you respect Japan it respects you back, and Fenestraz now has a wider affinity to a culture where his fanbase – and as a result his confidence – has grown.

“The environment of motorsport, the people who surround motorsport here, the fans, it’s just incredible. It’s such big support from the Japanese fans for the motorsport here, and that’s very enjoyable. In my opinion, and in my style of how I am, it’s kind of the way I like it here. Everything is super organised. I enjoy it a lot. It’s a country that I really appreciate, and the people have been very nice and friendly and helpful to me. And I had a big support this year with Japanese fans as well.”

Being an official Toyota driver for 2020 gives Fenestraz another confidence hike, and is a brilliant turnaround in just a single year since his Renault rejection. In his first taste of SF machinery in the post-season Suzuka last December, he was 18th fastest overall and fifth best of the rookies, but was thoroughly encouraged for the season ahead – a stark change from 2019.

“It was incredible, first of all,” Fenestraz says of the test. “It’s just the speed, the downforce, just everything of the car was unbelievable. The first time for me driving such a powerful car. I had a very great time, enjoyed a lot of laps, and I learnt a lot as well from my team-mate [Kenta Yamashita]. The tyres were something very difficult I would say, with the mediums and softs. But it was very positive, and learned a lot for me for being able to be there this year.”

Fenestraz already has someone to go to in understanding the pressures of being a foreign driver representing Toyota, as Jose Maria Lopez – previously his brother-in-law – currently leads the World Endurance Championship for the manufacturer. The Argentinian now solely focuses on his Toyota commitments after a tricky three seasons in FE, where Fenestraz has also made connections.

In next month’s Marrakech rookie test he will drive for Jaguar, which will also be testing W Series champion Jamie Chadwick. The British marque is known for taking driver evaluation very seriously in previous FE tests and in work on its simulator, which Fenestraz will obviously have limited time on given he is based primarily in Japan. James Calado’s race seat there will be hotly contested for next season if the team’s lead driver Mitch Evans keeps up his winning form, and Fenestraz will do his chances no harm if he impresses in Marrakech. After all, Jaguar will be watching very closely regardless.

Also in Marrakech is Cassidy, testing for Virgin Racing, who will be on the other side of the TOM’S garage to Fenestraz in Super GT this year and may well be the man he has to beat in SF too to become Toyota’s new benchmark driver.