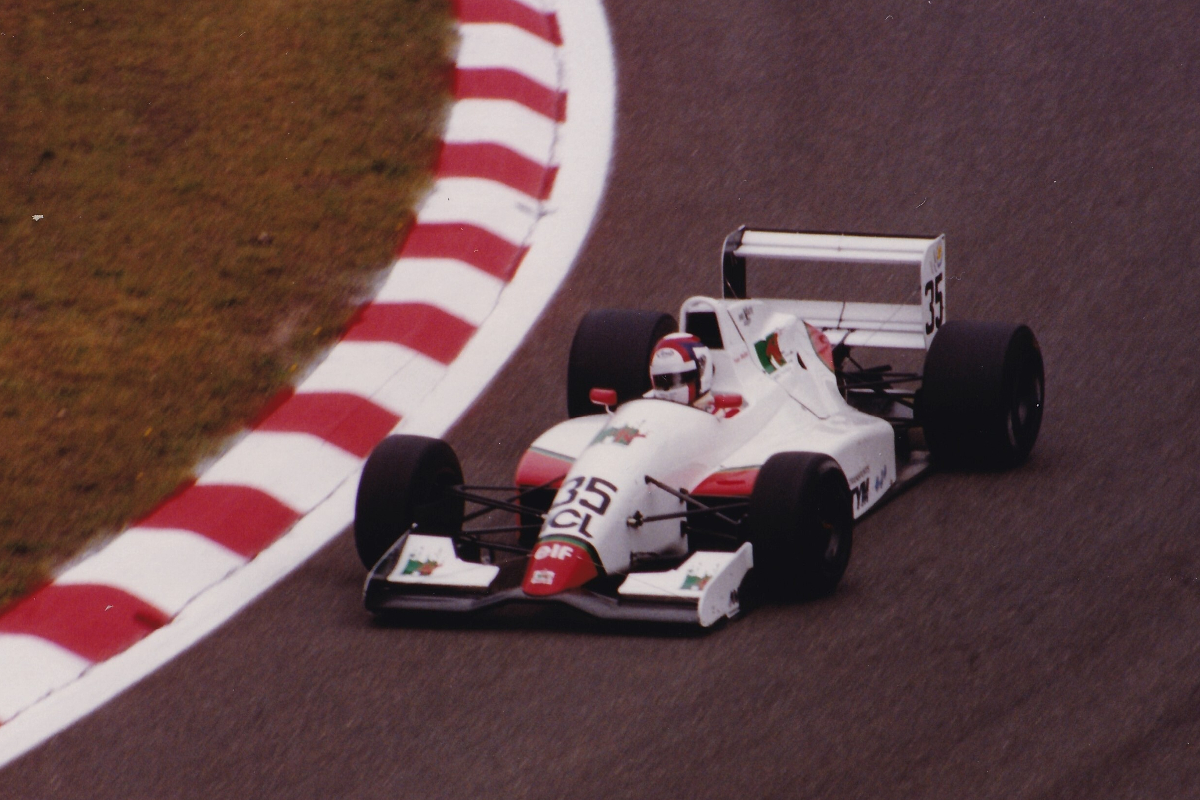 30 years ago today, future touring car legend Yvan Muller won the British Formula 2 title on Silverstone’s National configuration. Why was he in the feeder series, what exactly was it, and when did it disappear?

On September 13, 1992, there were 12 Formula 3000 machines roaring around Silverstone in a race with a very close victory fight. These were the Formula 2 cars of their day, and they were whizzing past the pitwall every minute on a wet track surface because they were using the short 1.649-mile National configuration of the circuit.

Copse and Maggotts were as they are today, but Brooklands and Luffied were almost unrecognisable from the current mirrored semicircular corners we have now, as both were 90-degree bends.

At the front of the field and fighting lap after lap were Yvan Muller, driving for the Omegaland team of 1974 Castle Combe Formula Ford 1600 champion Roger Orgee, and CoBRa Motorsport’s Enrico Bertaggia.

Muller had already won four races that season and could wrap up the title a round early with any result as long as he was ahead of Madgwick Motorsport-run rival Jason Elliott, who was down in sixth place as he continued a tendency to struggle more in the wet than Muller did.

Despite the title potentially being on the line, Muller got super close with Bertaggia and the pair frequently ran side-by-side on a track despite the lack of grip meaning any misjudged throttle control could have quite easily led to wheelspin, a slide and quite possibly a collision.

They kept it clean, and former Super Formula racer Bertaggia took the win in a photo finish (obscured by spray) by 0.15 seconds. Muller finished second, and was crowned champion as a result.

It was a key turnaround for the then-23-year-old Muller, whose career had been on the brink of going into oblivion prior to turning up in British F2, as after coming third in the French Formula Renault championship he had spent three years in French Formula 3 and only won one race.

“Of course it was a great season, I won the championship, but it was for me the opportunity to drive a F3000 car with a lower budget because I didn’t have the opportunity to do International F3000 at that time,” said Muller when Formula Scout caught up with him this year.

“The budget was great. I really enjoyed that year, to race in the UK with an F2 car on circuits like Oulton Park and Thruxton. Honestly I would not do it anymore now, aged 50+, but I was 23, I was young at that time. It’s good memories of that season.”

Muller was the second person in his family to race in F3000, as older sister Cathy had competed in the International championship in 1986 and actually been team-mate to her brother at Ecurie Elf during his rookie French F3 season in 1989.

The younger Muller’s time in F3 [pictured below] lasted three years thanks to some “small help” from engine supplier Alfa Romeo, but he was without that support for his move to Britain so he had to up his game. And he did just that.

The season started with a dominant Good Friday win for Peter Kox at Oulton Park, but the Weylock Racing driver’s gearbox expired after just two laps in round two at Donington Park and he didn’t show winning pace after that.

Muller came second to Cox but then didn’t have a good Donington weekend either, actually missing the race entirely as a wheel came off his car on the formation lap.

Elliott held off East Essex Racing’s Mark Albon to win, despite his car having a split tub, and Muller then became the form man after that. Brands Hatch was a circuit he was particularly strong at, winning both of the races on the shorter Indy layout and also a wet race on the full Grand Prix configuration. 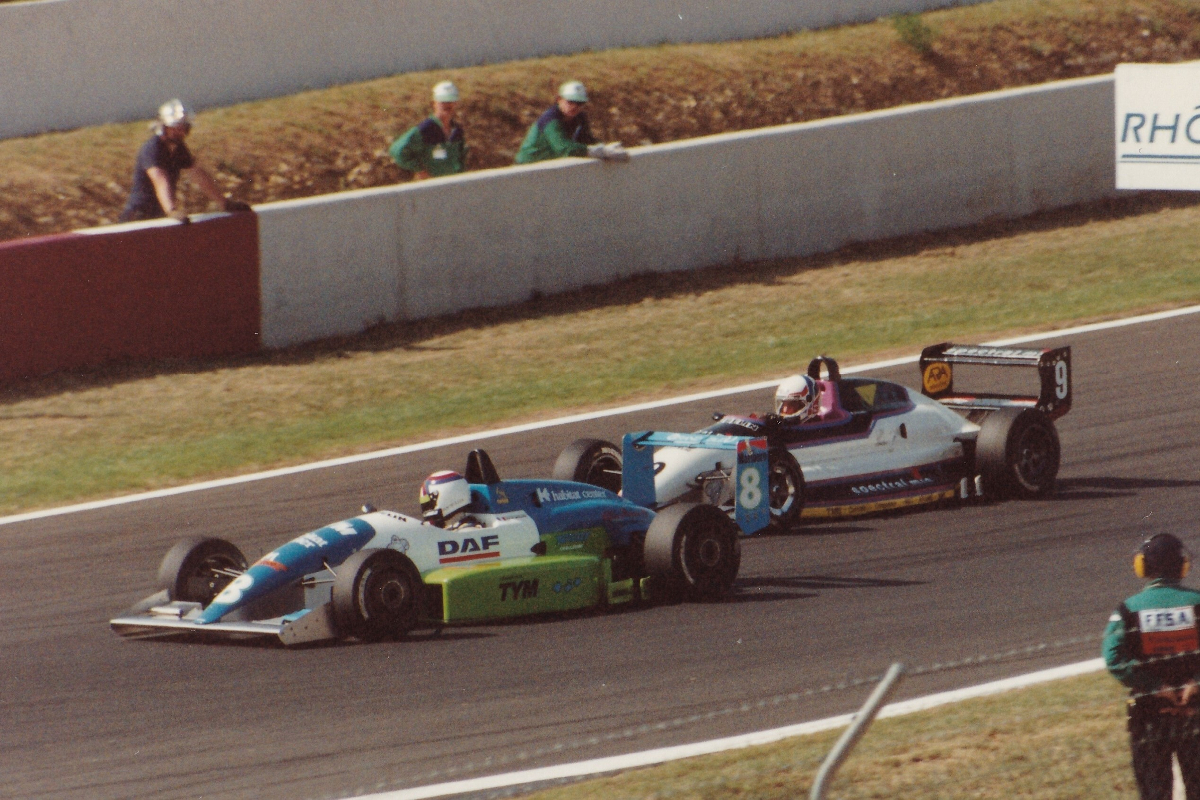 Between the first two Brands races was a visit to Thruxton, another really short track for high-downforce cars, and Muller and Elliott’s battle for victory was punctuated by lapped traffic. Ultimately Elliott navigated it best to win, but then lost out to Muller in the next two races at Brands and Oulton.

Mark Albon took pole by a slim margin at Snetterton, another track with a sub-minute lap in F3000 cars, but then was far more controlling in the race for his only win of the year.

Muller starred at a rainy Brands Hatch a month later, when Elliott took pole but then made contact with Muller, Cox and Bertaggia in the low-grip conditions and finally crashed out with two laps to go. Although he was initially classified in fifth, and therefore scored two points, end-of-year reports said that it was counted as a retirement instead and it set up the possibility for Muller to then be crowned champion a week on at Silverstone.

The Donington season finale was initially even closer than the Silverstone battle, as Team AJS’s Jose Luis di Palma led a top six split by just a tenth of a second in qualifying. But several of the victory contenders retired, and then Muller messed up his chance of a fifth win of the season while behind the safety car and Massimo Monti, driving for Italian outfit Junior Team, claimed a surprise victory.

Muller’s budget that year had also extended to contesting F3000’s World Cup-awarding Buenos Aires Grand Prix, and he finished eighth on his trip to Argentina. But the step into Int. F3000 for 1993 [pictured top] didn’t build on that result.

“[We spent the year learning the car in Britain], because we did the following year with the same team the European championship. But unfortunately our budget was very small, and we had not the budget, the proper budget to do the job properly. But OK, we still managed to be in the points, and the points was only the top six at that time. All the other races we DNF’d, but it was not too bad.”

Muller actually finished two races out of nine in 1993, coming 11th at Spa-Francorchamps and fifth in the Nogaro finale to score his maiden points and end the year 18th in the standings.

“After that year year in ‘93, I thought ‘okay, that’s the end of my career’. I was ready to go to work on the transport company of the family, and finally Oreca called me, asked me to come to do a test with their touring car, and that restarted my career.”

On the brink of ending his racing career entirely, Muller ended up racing an Oreca-run BMW in the French Supertouring Championship and it set him on a path of becoming one of the greatest touring car racers of all time.

He won the French title in 1995, then worked for Audi Sport and competed in Italy and Germany before one day the company asked Muller what he wanted to do.

Muller raced in the British Touring Car Championship from 1998 to 2005, winning the title with Vauxhall in 2003 and also Australian Supercars’ Sandown 500 race that year, then he switched to the revived World Touring Car Championship with SEAT and became 2008 champion before moving to the Ray Mallock-run Chevrolet operation and adding another three titles.

He now races for Lynk & Co in the World Touring Car Cup [pictured below] and is still capable of fighting at the front after 25 years at the top level.

Sadly British F2 did not have the same longevity. Although for many seasons it had as modern cars as the International championship (although admittedly high-mileage chassis that had already been campaigned there), it so often struggled to get grid sizes into double figures and could often only attract the ‘bigger talents’ for one-off appearances or only for part-time programmes as circuit practice. 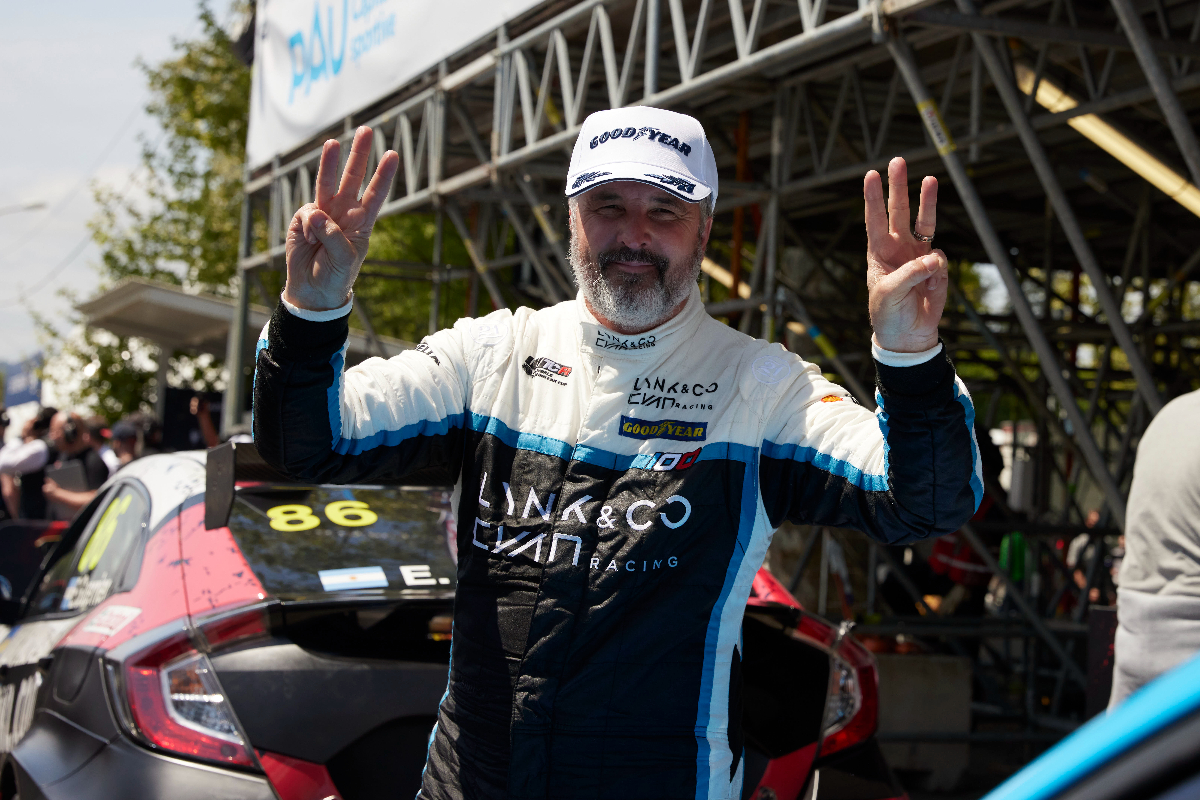 Andrew Gilbert-Scott, runner-up in the inaugural season in 1989, would go on to almost become SF champion and he shared his time in what was then called British F3000 with the likes of Roland Ratzenberger, 1996 F1 world champion Damon Hill and British F1 race-winner Desire Wilson.

In 1990 the runner-up was Alain Menu, a future long-term team-mate and rival of Muller’s in touring cars, and he raced against fellow BTCC champions Tim Harvey and Rickard Rydell and James Hunt’s brother David.

The single-seater talent shone bright in 1991 but the series was hit by tragedy as Madgwick Motorsport’s Paul Warwick posthomously won the title. The 22-year-old won the first five races from pole, but died in an accident in the last of those at Oulton Park and was awarded the victory as he was leading the race at the time.

Reigning FFord Festival winner Dave Coyne became the driver to beat after Warwick’s death, then another future touring car legend in Frederik Ekblom. Best known for their futures in IndyCar, Marco Greco and Kenny Brack were also on that year’s grid.

The entry lists dwindled and Belgium’s Philippe Adams won the 1993 title against little opposition by only turning up to six races and winning five of them. Incredibly the Moosehead Grand Prix, a street circuit event in Canada, was a points-scoring round in 1994 and unsurprisingly only three series regulars attended. Di Palma was that year’s champion, and only two drivers signed up to race in 1995 so the championship got called off.

The 1997 season opener would be the last ever event for the series, which had switched back to the British F3000 name, and Northern Ireland’s Dino Morelli beat Rodriguez and Tommy Field to win. Several more revival attempts occurred in the years after, but that was the end for a series which thought it knew its place and did actually launch the careers of a few drivers but either side of a UK recession occupied a strange space which meant it would not grow and would eventually die.