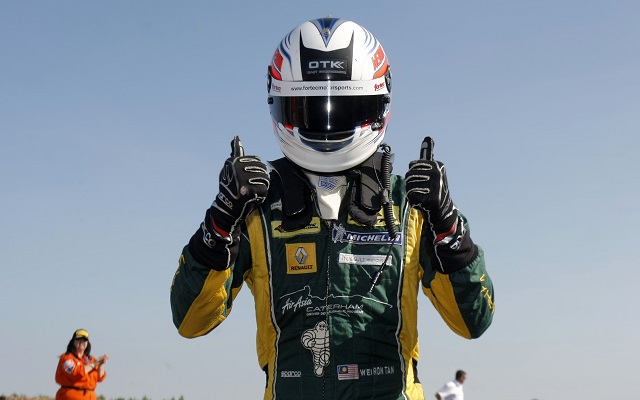 Caterham junior Weiron Tan will make the switch to German F3 in 2014, having signed with Dutch squad Van Amersfoort Racing.

Tan, 19, made his single-seater debut in 2012 with a part-time campaign in the JK Racing Asia series. He took part in the first four rounds and finished on the podium two times, winding up seventh in the final standings.

In 2013, he joined Fortec in the Protyre Formula Renault series. After a rather inconsistent if promising start to the campaign, he established himself as runaway leader Chris Middlehurst‘s chief rival by taking five wins in a row, but had to settle for runner-up when his title hopes were ended due to a mechanical failure in the final race of the penultimate round.

Tan extensively tested with VAR in the post-season and becomes the team’s first signing for their German F3 lineup. The Malaysian will race in the main class of the series.

“I am really excited to be racing in Formula 3 next season”, stated Tan. “The car is the most amazing car to drive and I simply can?t wait to get back in it! I really must thank Van Amersfoort Racing, Caterham F1 and WHSG for this opportunity and I shall be giving it my all to make sure we get the best results we can!”

In 2013, Van Amersfoort Racing narrowly beat Swedish squad Performance for second in the German F3 teams’ standings. VAR team leader Gustavo Menezes, who has since been promoted to the team’s FIA F3 lineup, finished the season in fourth.