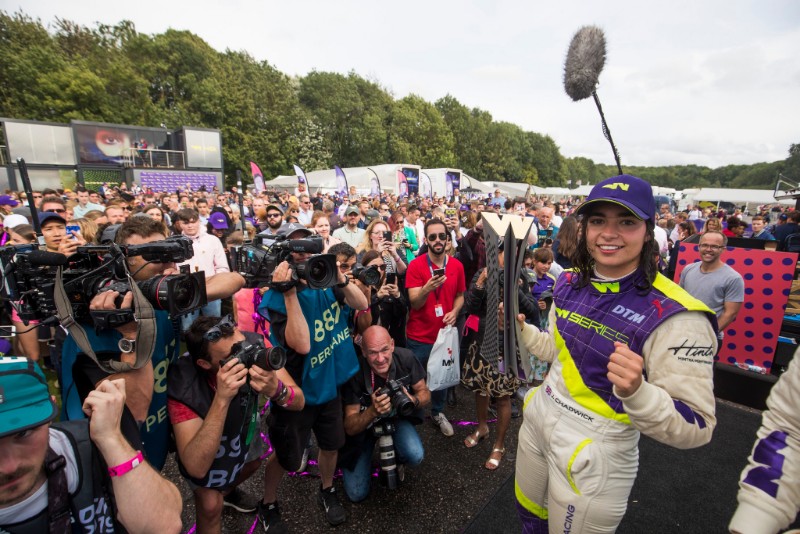 W Series champion Jamie Chadwick has said that the season finale at Brands Hatch was the most “intense” day of her career so far.

Chadwick came into the final round 13 points ahead of her sole title rival Beitske Visser and knew that a podium would be enough to secure her the championship win.

The Briton took pole position in the dying seconds of qualifying?but had a difficult race, uncharacteristically making mistakes and ended up finishing fourth, while compatriot Alice Powell went on to win.

“Today has been more intense than any other racing day I have ever had” commented Chadwick.

“I?ve never really experienced that kind of pressure before and I guess when you?ve got a championship?but also, at the back of your mind you just want to win the race.

“Definitely not a pretty race but in terms of the championship it is everything we needed to do.”

Chadwick had a good start from pole, and led until Powell challenged her into Paddock Hill Bend on lap six, eventually completing the move at Druids. At the time, Chadwick thought she had the lead under control but Powell’s move caught her by surprise.

“I managed the gap pretty well for the first few laps. I managed to gap Alice a little bit and yeah I felt really comfortable out front.

“Alice had a bit more pace than me I think and it?s that kind of nothing to lose feeling where I kind of knew she was maybe going to make a bit of a move and threw her nose down the inside of Paddock which actually caught me out big time.

“[That] allowed Emma Kimilainen through, a little bit of wheel banging and I knew it wasn?t my battle to fight but yeah, just kind of lost my rhythm from there a little bit.”

The 21-year-old later made a slight error that allowed Visser to pass her going into the Sheene Curve and she felt that was her biggest mistake of the day.

“I made one mistake that I felt was the costly [one], which let Beitske past.

“This track is one of those that you need to be on it 100%, so in qualifying I was on it 100% and in the race I didn?t quite, feel quite as comfortable to push to that level knowing what was at stake.?Honestly as a race goes, probably the most stressful 30 minutes of my life.”