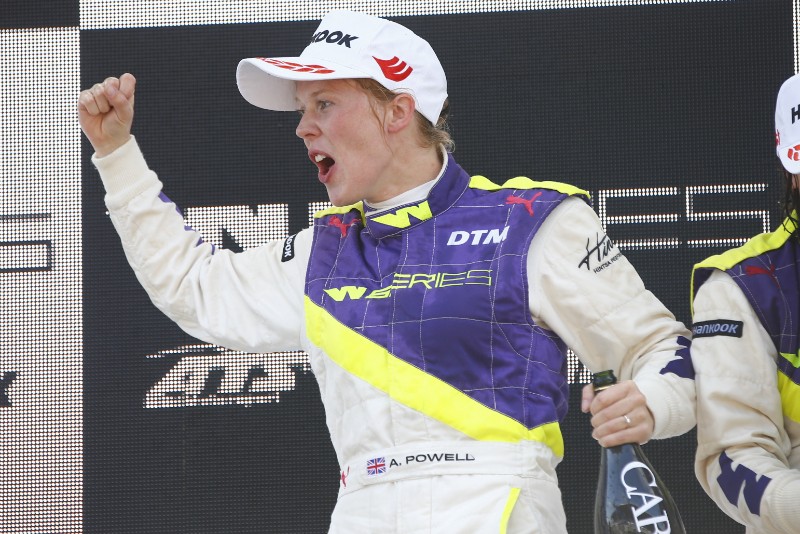 Brands Hatch W Series race winner Alice Powell has said she was ‘always confident’ of a win at the circuit after a ‘tough season’.

Powell had a strong start to the season with two podium finishes, but retired from the following rounds due to a crash at Misano and then a gearbox failure and fuel pump issue at the Norisring.

The 26-year-old had a return to form at Assen where she was second to Emma Kimilainen, and then second again in the reversed grid non-championship race, and went one better on Brands Hatch’s Grand Prix layout.

“It has been a tough middle of the season so to come back at Assen with the second and then to come here with the home crowd at Brands Hatch as well to take the win was really really good” said Powell.

“We went a bit lower on the tyre pressures [for the race] because I was struggling a little bit in qualifying with some understeer, so I wanted to make sure it was there, especially for the end of the race.

“The first few laps were a little bit tricky but I just kept it patient and then I quickly realised I had the pace over Jamie. I wanted to get past as soon as possible and just threw one up the inside and Jamie did really well to try and fight it round the outside.”

Kimilainen followed Powell past Chadwick on lap six, and soon closed up on the Briton – applying pressure right up until the end of the race. Despite this, Powell felt she was in control of the situation on the way to victory.

“It was just about managing the pace from there and keeping it good but consistent as well.?I always felt pretty confident to be honest.

“I was always trying to keep consistent times, keep it consistent and keep the pace pretty good so I think we were probably in the mid 1m23?s for the majority of the race.”

At the mid-point of the season Powell had dropped to fifth in the driver’s standings, but the Brands Hatch win brought her back up to third and pocketed the 2014 Asian Formula Renault champion $125,000.

“The middle of the season was quite tough and I dropped from second into the championship down to like fifth.?We managed to climb up and finish third obviously with that race win but yeah it was really good.

“I have lost my voice from screaming and shouting across the line when the chequered flag came out so yeah I’m really, really happy.”