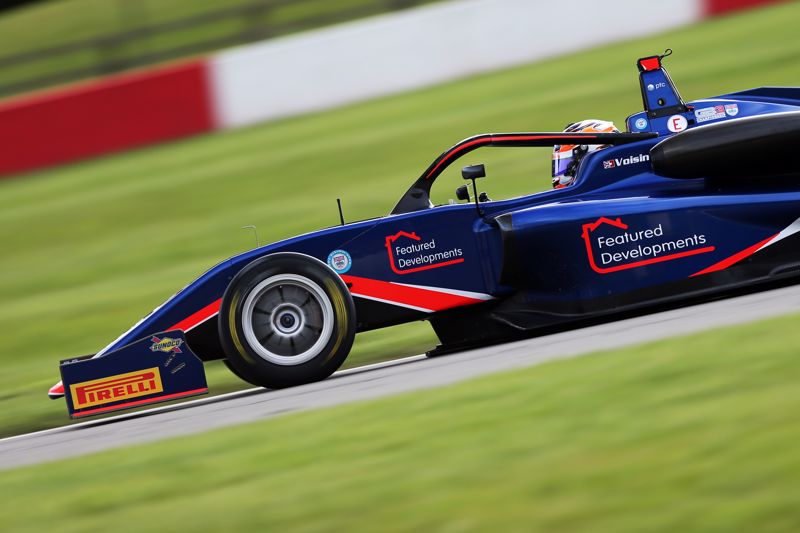 Callum Voisin took a lights-to-flag victory in race one of the GB3 finale at Donington Park, while Luke Browning extended his points lead by finishing second.

Voisin converted pole into the lead at the start ahead of Elite Motorsport duo Tom Lebbon and John Bennett, the latter edging ahead of Bryce Aron before Redgate.

The safety car was deployed after four laps when Arden’s David Morales crashed on the exit of Melbourne hairpin.

Browning pounced at the restart to pass Bennett for third on the outside of Redgate, with Granfors taking Aron for fifth into Coppice later in the lap.

Voisin controlled the remainder of the contest, coming home 1.532 seconds clear of Lebbon to take his third win of the season.

But Lebbon was handed a 5s penalty for exceeding track limits, demoting him to fourth behind Browning and Bennett, the latter taking his first podium finish.

Granfors was classified 0.114s behind Lebbon in fifth, and now trails Browning by 25.5 points with two races remaining on Sunday.

Aron came home sixth ahead of Carlin’s Javier Sagrera, who prevailed in an early battle with Faria.

But things ended badly for Faria, picking up a rear-right puncture after contact with Chris Dittmann Racing’s McKenzy Cresswell, who suffered front and rear wing damage, both drivers dropping to the rear of the field after pitting.

Cresswell’s team-mate Zak Taylor prevailed in a fight for eighth with Arden’s Nico Christodoulou, with the Canadian’s team-mate Alex Connor completing the top 10.

JHR Developments driver James Hedley did not take part after fracturing his thumb in a testing incident on Friday.