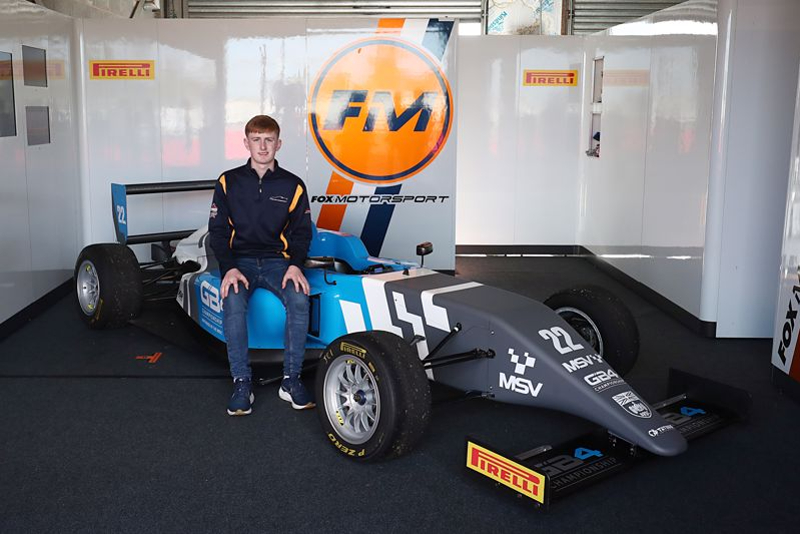 Sportscar team Fox Motorsport has announced a multi-car GB4 entry for 2023, with Liam McNeilly confirmed as its first driver.

McNeilly is the son of team owner Paul, and has been a frontrunner with the squad in Ginetta Junior. He was championship runner-up last year, and third this season.

The 16-year old previously karted prior to making his car racing debut in 2020, and has already completed a test in a GB4 car.

“It’s a new opportunity for me and for Fox Motorsport and it’s going to be good to see how we get on. We’ve achieved a lot together in Ginetta Junior, having started from basically nowhere, so with the experience we’ve gained together in junior racing, we’re in a much better place now.

“I’ve driven a GB4 car on a test day and the two things that stood out straight away against the Ginetta were the amount of grip through the corners and the feeling of the power.  I can’t wait to get started.”

Fox will run at least two cars in the Formula 4-spec series, which will be its first assault on single-seaters. The team has had multiple successes across British GT,  International GT Open and Ginetta Junior – as well as Ginetta’s GT5 Challenge and GT4 Supercup series.

“We’re very excited to join the GB4 Championship for 2023 for our first proper assault on a single-seater series,” added McNeilly Sr.

“GB4 will serve as an accessible learning platform for drivers to progress from our Ginetta Junior team and learn key skills such as racing with slicks and wings, while doing it without driver aids like traction control or ABS. A year or two in GB4 should leave a driver more than ready to compete in GT4 or GT3, where we’ve raced successfully for many years.

“We’re going in with high targets. We aim to compete at the front straight away and win races. We’ve won at every level we’ve competed at and I don’t see why we should expect any less in GB4.”