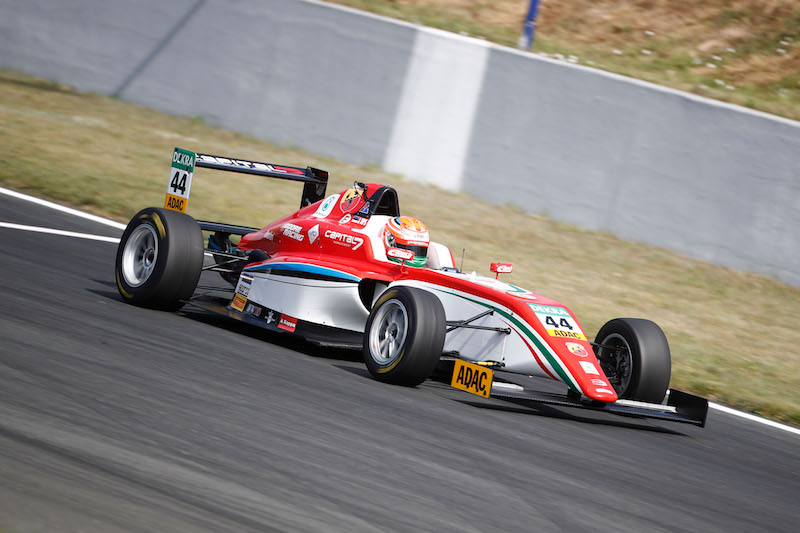 Juri Vips has won the ADAC Formula 4 title with third place in the final race at Hockenheim behind Marcus Armstrong, as Artem Petrov beat both to the race win.

Ferrari protege Armstrong led Prema team-mate Vips by 1.5 points coming into the weekend but was hampered by problems in qualifying, leaving him 7.5 points behind into the final race, but he did have pole position on the reversed grid, with Vips third.

If Armstrong were to win the race, Vips would need to get up to second, and he did this right at the start with a better launch than Cedric Piro, before challenging Armstrong over the following corners.

Vips looked to have grabbed the lead into the hairpin but he went deep, and Piro was able to use the cut-back to emerge ahead of Armstrong, Petrov and Vips.

That only lasted until 10 minutes into the 30-minute race, when the privateer was caught by both Armstrong and Petrov, with the trio going three-wide into the hairpin.

Petrov on the outside was carrying the most speed and bravely dived into the corner first and emerged with the lead.

It took Armstrong another lap to get past Piro, and Vips followed him past at the Mercedes Arena.

Petrov was able to quickly build a two-second advantage over the Prema pair, who then lacked the pace to catch the Russian, who took victory in only his second outing with Van Amersfoort Racing.

Vips followed Armstrong closely until the chequered flag to win the title by 4.5 points over the New Zealander, who leads the Italian F4 title race with two rounds to go in his first full season in single-seaters.

Felipe Drugovich had taken the championship lead with victory in race one before a technical issue forced him out of race two, and wasn’t able to get into the mix with the Prema drivers from 10th on the grid.

He had climbed to sixth in the first half of the race before a coming together with Fabio Scherer, caused when the Brazilian was forced over the kerb at Turn 3 and then clattered into Scherer at Turn 4, pushing the US Racing driver wide.

The lost momentum cost Drugovich three places at the Mercedes Arena, but he did fight back to finish fifth behind team-mate Louis Gachot after both passed Piro late on. He ends the year third in the standings, nine points behind Vips.

Sophia Florsch came from the back of the grid to beat Mucke Motorsport team-mate Oliver Soderstrom to seventh, with Kim-Luis Schramm ninth and the rookie champion Mick Wishofer 10th for his first outright point.