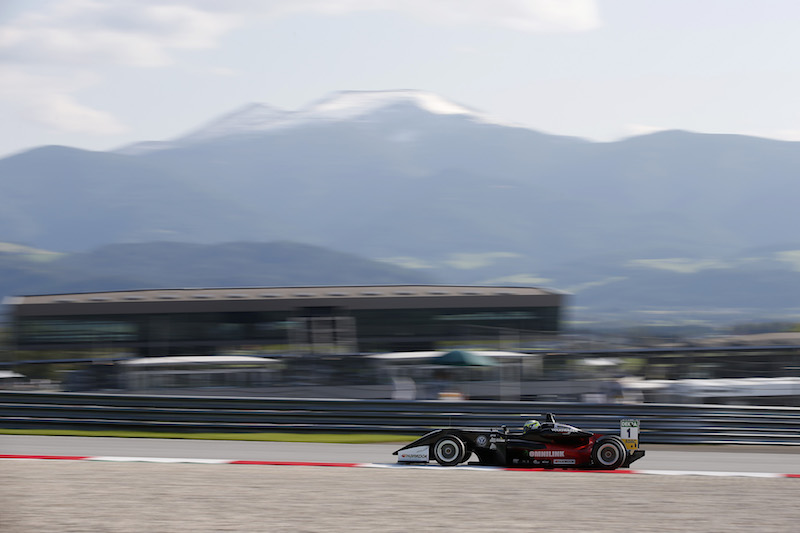 Joel Eriksson took an assured victory in the second FIA European Formula 3 race at the Red Bull Ring, but with Carlin?s Lando Norris finishing second the Motopark driver is now out of the title race.

Into Turn 1 poleman Eriksson was unchallenged, but the long run up to Turn 3 meant fellow front row man Norris could get a slipstream and attack the leader.

Through Turns 3 and 4 Eriksson was forced to defend heavily, which briefly let Hitech GP?s Nikita Mazepin have a look at second. The Russian did not have the pace to stay with them though, and the top two started to pull away.

Eriksson struggled to shake off Norris, and it took 18 laps before the Swede got his lead out to a second. A lap later Norris struck back with a personal best lap, and Eriksson was forced to dig deeper to keep the lead.

Norris had pace in hand, but not track position, and he brought the lead back down to under a second by the final lap.

Eriksson?s fifth win of the season means he moves back past Prema?s Callum Ilott for third in the standings, but is now too many points behind Norris to challenge for the title.

Although Mazepin was unable to challenge the top two, he had more than enough to contain Illot, and he crossed the line in third for his second podium of the season.

Behind Ilott were Carlin?s Jehan Daruvala and Hitech?s Jake Hughes, although the latter?s eighth place is under investigation after a last lap incident.

Ferdinand Habsburg had chased down Hughes, and on the last lap attempted a move round the outside of Turn 3 for seventh place. Hughes used up all the road, runnning Habsburg off the road and dropping the Austrian three places by the end of the lap.

The main beneficiary of the incident was Maximilian Gunther, who is now the only driver other than Norris in contention to become champion.

Gunther had struggled for pace and spent the whole race in ninth place. By moving up to eighth on the last lap the German is now 84 points behind Norris, with 100 still available.

Joey Mawson, who had been challenging Gunther for position late in the race, took ninth place, with Habsburg tenth.

Jumped starts for Tadasuke Makino and Guan Yu Zhou meant they served drive-through penalties, although Zhou did significantly slow down after realising his mistake.

Devlin DeFrancesco, who made his European F3 debut in race one, stalled at the start and finished two laps down.