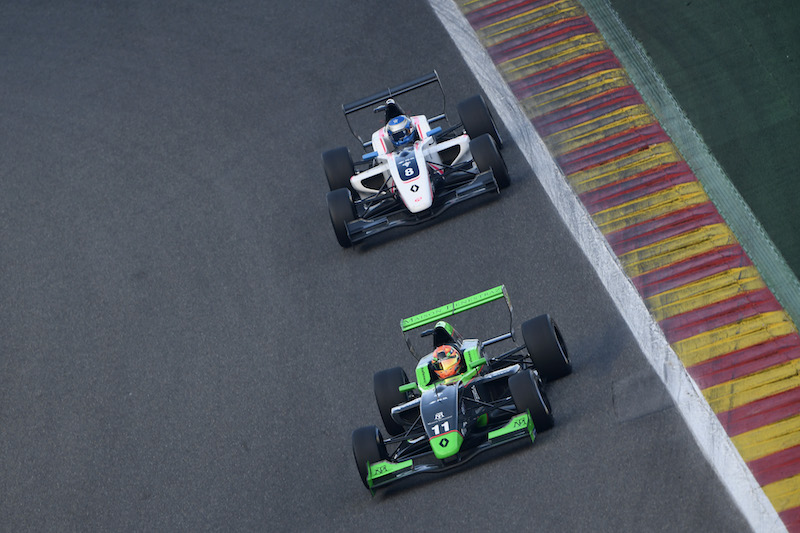 Sacha Fenestraz led the final Formula Renault Eurocup race at Spa-Francorchamps from lights-to-flag to increase his series lead to over 50 points.

From pole, Fenestraz went into Eau Rouge with title rivals Robert Shwartzman and Will Palmer right on his tail, but managed to keep the lead all the way up the Kemmel Straight.

With Shwartzman and Palmer held up, Gabriel Aubry managed to get a run alongside Fenestraz into Les Combes, but found himself eased out on the outside and he was pushed back to seventh by the time the safety car came out for a clash down the order on the approach to Pouhon.

Fenestraz got a good restart to stay out of Palmer’s reach and was never threatened thereafter, taking his sixth win of the year by 0.8 seconds.

It means he is now 52.5 points ahead of Palmer at the top of the standings ahead of the final three races at Barcelona next month.

Shwartzman was passed by Max Defourny and Max Fewtrell down the Kemmel Straight on the restart, and as Fewtrell then defended the inside into Bruxelles, Richard Verschoor came around the outside of Shwartzman.

Verschoor and Shwartzman went side-by-side again through Blanchimont and into the Bus Stop, and came together on the exit, forcing both to retire.

That ended Shwartzman’s title hopes, and he falls to fourth in the standings behind Defourny, who lost third to Fewtrell into Les Combes with two minutes on the clock.

Gilles Magnus returned after his big race two crash, and although he slipped back from 10th to 18th, that was still enough to take the Northern European Cup victory.

Rival Charles Milesi triggered the first-lap safety car when he got wide over the grass exiting Turn 11 and spun into the path of Luis Leeds, sending both into the barriers.