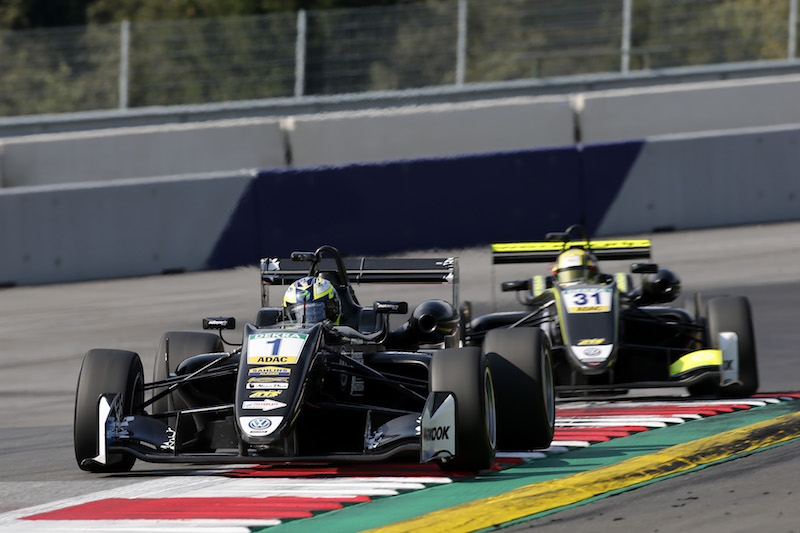 Joel Eriksson took another win in the third Formula 3 European Championship race at the Red Bull Ring, as Lando Norris was dramatically denied an early title celebration when he was hit on the final lap.

Taking an 82-point cushion into the race, Norris was well on course to wrap up the crown before the final round at the Hockenheim as he chased Eriksson for the race victory.

Eriksson had made a good start from pole, but was forced to defend from Norris into Turn 3, and only just managed to stay ahead at Turn 4 when the Carlin driver was on his inside.

They went side-by-side again a lap later, getting ridiculously close together as they approached Turn 4, where Eriksson used the inside line to keep the lead.

After a full course yellow, Norris continued to give chase to Eriksson, and eventually got back alongside into Turn 4 with five minutes of the 35-minute race remaining.

On the exit they were nose-to-tail, with Eriksson sticking to the left of the track to cover off the inside line for the next left-hander, and Norris got so close behind that he ripped off the right-hand end-fence of his front wing.

The lost downforce allowed Eriksson to escape for the victory while Norris came under pressure from Ralf Aron, who had jumped up from fifth to third at the start.

It took until the final lap for Aron to attempt a pass, and after Norris had defended the inside at Turn 3, he did the same at Turn 4.

Instead of using the outside, Aron moved back into Norris’ slipstream but in the dirty air locked up and could not get his car slowed down, hitting Norris in the rear and taking both into the gravel trap.

With his one remaining title rival Maximilian Gunther classified in fifth place, Norris’ lead has been reduced to 72 points with 75 still available and he will have to wait until Hockenheim to secure the title.

From seventh on the grid, Ferdinand Habsburg had followed Norris and Aron through the closing stages and inherited second on the road on his home track, but a five-second penalty for abusing track limits dropped him to fourth behind Hitech drivers Nikita Mazepin and Tadasuke Makino – the latter converting his recent improved form into a maiden podium.

Joey Mawson had actually crossed the line ahead of Makino, but he also took a penalty that dropped him behind Gunther and Jehan Daruvala and just in front of Mick Schumacher.

David Beckmann survived an off-track moment to take ninth with his Motopark team-mate Marino Sato picking up his first point in 10th.

Callum Ilott was forced to retire after being forced wide, over a high kerb and through a gravel trap when he went side-by-side with Aron through Turn 6 for third place on the first lap.