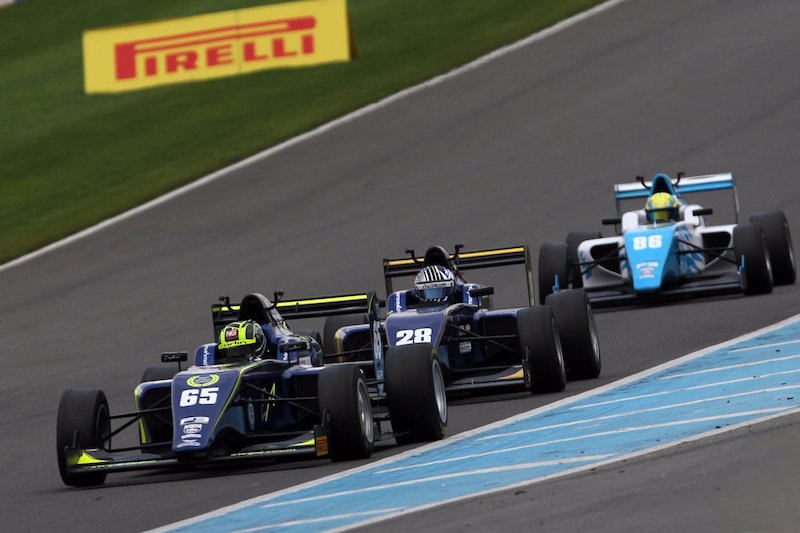 BRDC British Formula 3 champion Enaam Ahmed took his 13th win of the season in the final race of the season at Donington Park after victories for Ben Hingeley and Jordan Cane.

Although Ahmed failed to reach his target of claiming the most wins in a single British F3 season, his win, second and a sixth place in the three races held meant he was once again the top man over the weekend.

The first race of the weekend was a tense encounter, with Fortec?s Hingeley triumphing over Carlin man Ahmed.

Hingeley started from pole, with Ahmed in second place on the grid but very quickly alongside the leader. A move at Redgate failed as he was forced out wide, but the recently crowned champion did not drop back and he stayed in Hingeley?s mirrors for the rest of the race.

The pair crossed the finish four tenths apart, with Ahmed?s team-mate Cameron Das completing the podium two seconds back after leaping past Chase Owen at the start.

Owen ended the race in sixth, with James Pull and Jordan Cane in fourth and fifth.

British F3 debutant Alex Quinn, replacing the absent Toby Sowery at Lanan Racing, secured 10th place after a scrap with Manuel Maldonado, but was then given a five second penalty post-race for exceeding track limits, dropping him back to 11th.

With the top eight from Race 1 reversed forming the grid for the second race, Nicolai Kjaergaard started from pole, with Callan O?Keefe sharing the front row.

Much like in the first race, the poleman rebuked a move at Redgate on the first lap and then withstood the pressure from behind to stay just ahead throughout.

This time round there were no trophies to show for it, as a last lap move by O?Keefe at Redgate ended with Kjaergaard in the gravel trap and O?Keefe with dilapidating damage.

With a trio of drivers lined up behind, it suddenly became a three-way fight for victory, with Cane beating Owen and Pull for his third reversed-grid win of the season.

The damaged O?Keefe also dropped places to Das and Hingeley, with Ahmed claiming sixth having previously made no progress from his seventh place grid spot.

The result secured Pull second place in the standings, meaning Hingeley and Das would be fighting it out in the final race of the season to beat the absent Sowery to third.

The grid for the third race, set by the fastest lap times of each driver from the first two races, put Das on pole, ahead of Ahmed, Owen, Cane, Quinn and points rival Hingeley.

Das resisted Ahmed?s attack around the outside of Redgate on the first lap, and started to pull away from the Briton.

The lead stretched out to over a second at one point, before Ahmed reacted and very quickly hunted down the leader.

He took the lead with a brave lunge at the Melbourne Hairpin with four laps to go, and on the next lap Das was then demoted to third by Cane at the Old Hairpin.

Somehow the American had sustained front wing damage, and he fell from the final podium spot down the order before entering the pits.

As a result Quinn inherited a surprise podium, with Hingeley finishing in fourth and taking third in the championship as a result.

Das finished 13th and last, meaning he did not have enough points to surpass Sowery for fourth in the standings.

Ahmed?s 13th win of the season was not a record breaker, but he did beat the legendary Ayrton Senna?s tally of 12, which can only point to good things for the 2017 champion.