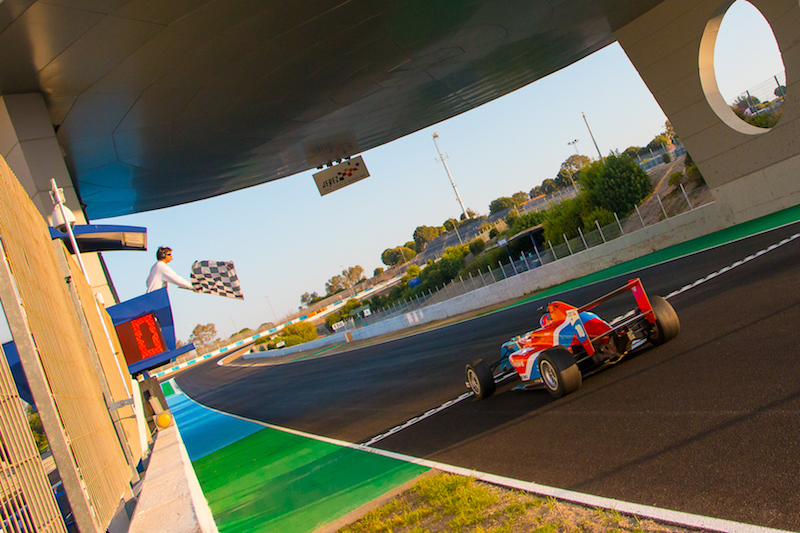 Alexander Smolyar continued to close on the Spanish Formula 4 series lead with a triple win at Jerez.

The Russian, who took a win apiece at the previous rounds at Navarra and Barcelona earlier this month, was unstoppable at Jerez and cut Christian Lundgaard?s advantage to 23 points.

In qualifying Smolyar was in control, with Javier Gonzalez lining up in second ahead of Renault Sport Academy drivers Lundgaard and Martia Garcia.

Smolyar made a confident start from pole, with Lundgaard moving past Gonzalez for second and Garcia dropping back.

Gonzalez fought back past Lundgaard, and the battling between the pair allowed Smolyar to escape by several seconds up the road.

Smolyar ended the race with an eight second lead over Gonzalez, with Lundgaard finishing third and Guiliem Pujeu in fourth.

Gonzalez?s second place was his first ever podium, and the first for the Drivex School team since the championship visited Jerez last season.

Smolyar started from the front again in the second race, and was untroubled as he romped to victory for the fourth time this season.

Lundgaard crossed the line in second, having used his fresher tyres to demote Pujeu and Gonzalez and then eat into Smolyar?s lead.

Post-race the Dane was handed a five second penalty post race for his forceful move on Pujeu for third, dropping the championship leader to fourth.

Having also set the fastest second-fastest time during qualifying, Smolyar started the final race of the weekend from the first grid slot, ahead of Gonzalez, Garcia and Lundgaard.

Smolyar once again aced the start, while Garcia continued a weekend of weak first laps by dropping to fourth, then losing another place Viscaal shortly later.

Smolyar spent the duration of the race on his own on the way to his weekend hat-trick of victories, while Gonzalez created a small gap over Lundgaard to round off his own hat-trick of second places.

Viscaal finished fourth, with Tuomas Haapalainen inheriting fifth after Garcia and Pujeu ended their races early by colliding at the final corner.

Haapalinen had drama of his own, with a five second penalty for abusing track limits and a mechanical failure as he crossed the finish line.