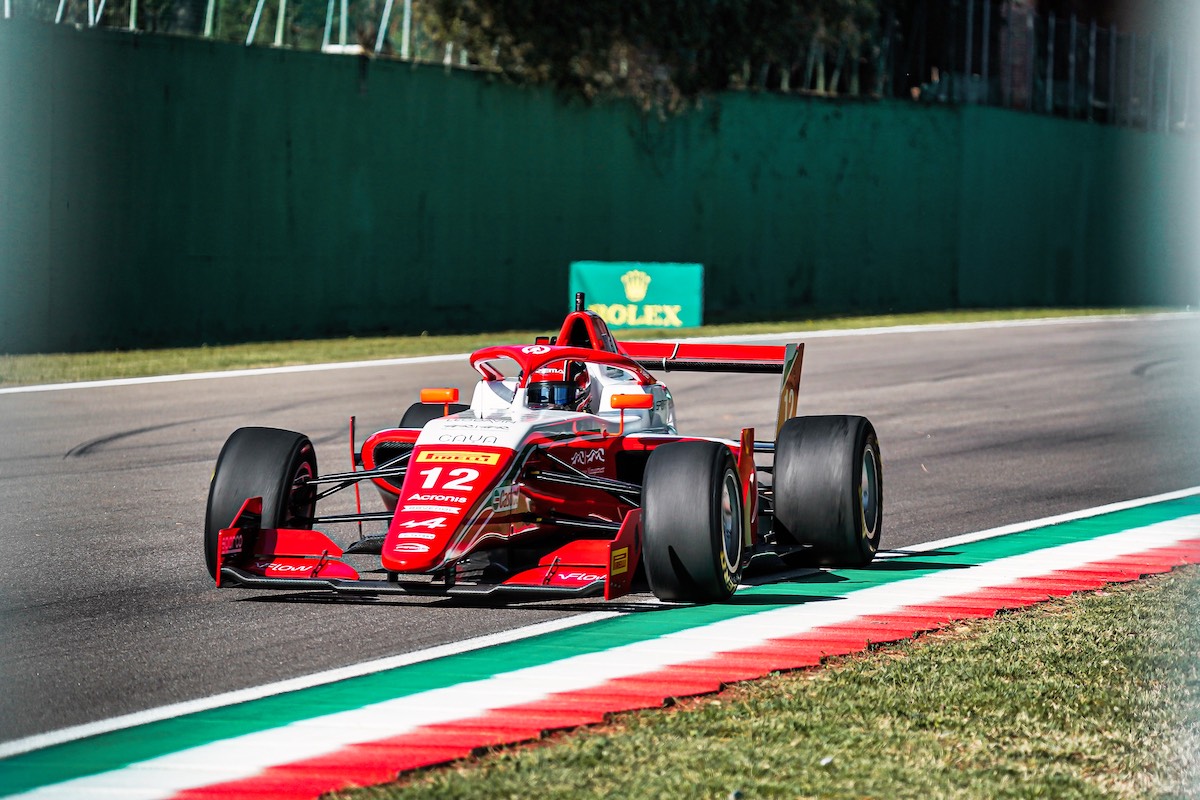 The race had already been interrupted by safety car periods twice when the yellow flags were brought out again with just under three minutes on the clock.

The 35 minute race ended behind the safety car, with Vidales securing the first race win of the year.

At the start, the Prema driver got a good get away from pole position while team-mate Paul Aron dropped behind Alex Quinn and Hadrien David.

Vidales didn’t get much chance to pull away from Quinn as, after just a few laps, the safety car was brought out when Nicola Mariangeli ended up in the gravel at Tamburello and Brad Benavides spun and launched himself over a raised kerb at Aqua Minerali.

Quinn couldn’t stick with Vidales on the restart and the race leader managed to get a good get away while Quinn battled to stay ahead of David.

Racing was paused again shortly before the halfway mark when JD Motorsport driver Tommy Smith put one wheel on the grass and was sent spinning into the gravel, bringing out the safety car again.

It was an almost identical restart for Vidales but, again, Quinn was unable to stick with him after running wide through Rivazza. David put pressure on the Arden Motorsport driver but couldn’t find a way through and was still running third when the safety car was brought out for the third and final time.

Kas Haverkort had been attempting to make a move on Andrea Rosso for 12th but couldn’t quite make it stick, causing him to lose momentum. Behind him, Patrick Pasma was caught out by how quick he closed in on the MP Motorsport driver and clipped the back of his car. Haverkort was left with damage to his car and both drivers retired from the race.

The remainder of the race was run behind the safety car, handing the victory to Vidales ahead of Quinn and David.

Aron held Gregorie Saucy off to take fourth. William Alatalo picked up sixth ahead of the battling rookies Isack Hadjar and Dino Beganovic.

Gabriel Bortoleto and Mari Boya completed the top 10 in their first ever Regional Formula 3 races, both having made late team moves to join FA Racing and Van Amersfoort Racing respectively. Italian Formula 4 champion Gabriele Mini had to make do with 11th on his debut after losing places at the start.