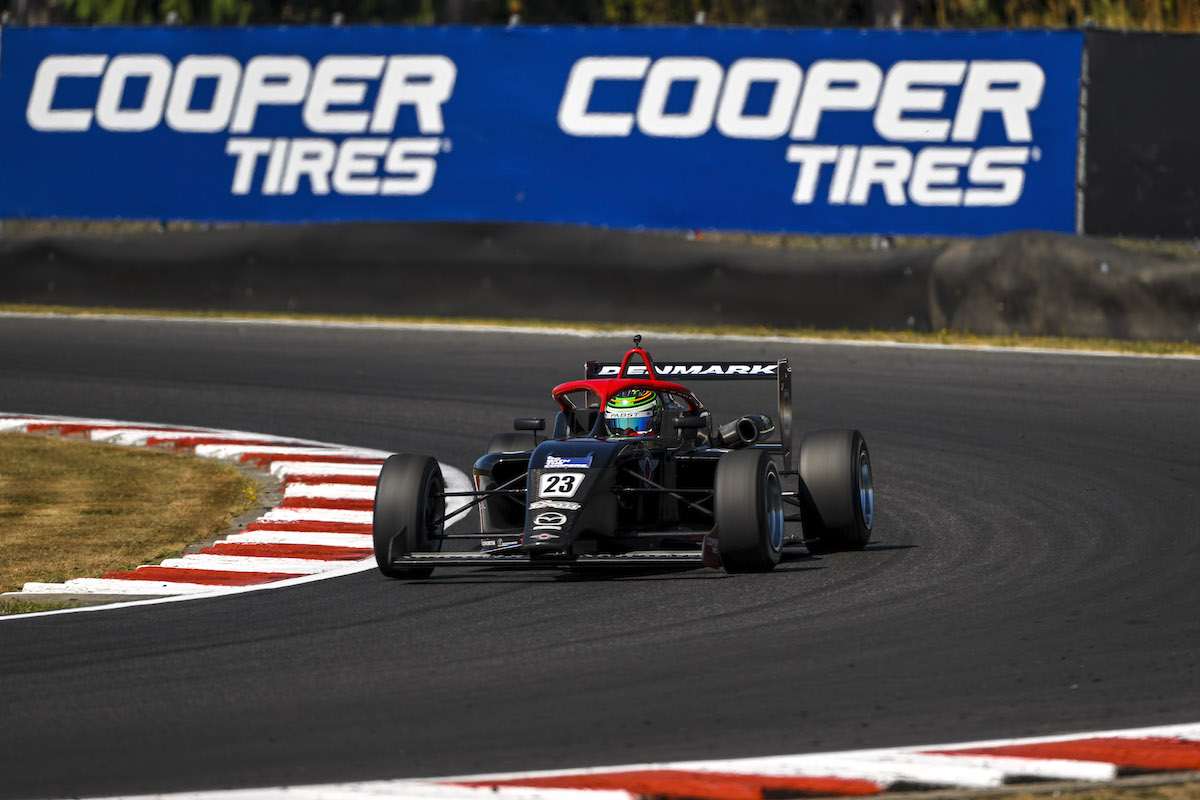 Jace Denmark moved to within four points of the USF2000 championship lead with victory in the opening race in Portland.

The win came as title rivals Myles Rowe and Michael d’Orlando ran into issues during the 25 lap race.

Denmark led from start to finish. On the opening lap, Thomas Nepveu jumped up to second while Nikita Johnson fell backwards. But before Nepveu could challenge Denmark, the race was neutralised due to an incident further back.

Nicholas d’Orlando and Dylan Christie were two of a number of drivers involved in an incident at the first corner and both were taken out of the race.

The field got a clean restart and Denmark pulled out of reach of the rest of the field. He was comfortably at the front of the order when the yellow flags were waved again, this time after Jagger Jones had run into the back of Christian Weir and both drivers spun. Spike Kohlbecker had his own incident just behind them and also spun. Weir and Kohlbecker were able to continue but Jones was left stranded on track.

On the restart, Rowe was on the move. He had already climbed up to third before the caution, but took second from Nepveu when racing resumed. He put Denmark under pressure, which allowed the recovering Johnson to close onto the back of the lead fight.

Rowe then found himself under attack and was forced wide as he tried to deny Johnson the move. Rowe took to the grass and the escape road but tumbled down the order.

Denmark now had a comfortable gap to second and took the chequered flag more than two seconds clear of Johnson, who was just ahead of Nepveu.

Rowe moved up to 10th on the final lap, but his lead was now reduced to four points with two races to go.

Michael d’Orlando also had a difficult race. He was on the move after qualifying at the tail end of the top 10 and had made it up to fifth when a trip through the grass at turn four dropped him backwards. D’Orlando restarted his climb, this time from outside the top 10, and managed to get up to seventh by the chequered flag.

Mac Clark, making his debut in the series, fell backwards in the opening lap drama but climbed up the order to finish fourth ahead of Jacob Douglas and Danny Dyszelski. Behind d’Orlando came Nicky Hays and Jorge Garciarce.