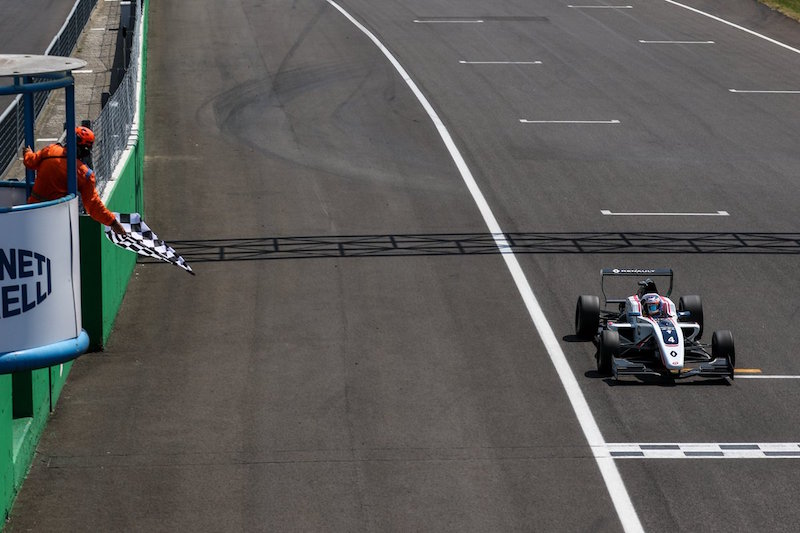 Martins got a strong start from poe to pull away from the battling Max Fewtrell and Frank Bird on the opening lap. He put in a faultless drive to take a lights-to-flag victory and finish more than four seconds ahead of the next driver.

Bird spent the first part of the race challenging Fewtrell for the second spot on the podium, but a misjudged braking brought both drivers? races to an early end.

The Tech 1 Racing driver ran into the back of Fewtrell, damaging his own front wing and Fewtrell?s rear wing. Both made it to the pits and, after a front-wing change, Bird was able to return to the track a lap down, but Fewtrell was unable to continue.

Charles Milesi, Lorenzo Colombo and Logan Sargeant inherited the battle for second. Milesi was able to put some air between himself and Colombo as the local driver defended against Sargeant, but he couldn?t significantly close the gap to Martins.

Colombo was able to shake Sargeant to take third, becoming the first non-R-Ace GP driver to finish on the podium this weekend.

Sargeant held onto fourth despite late pressure from Thomas Neubauer.

Victory for Martins puts the Frenchman top of the championship standings, just three points ahead of team-mate Sargeant.

Frank Bird was able to recover to ninth, just a lap behind the race leaders, ahead of Zichao Wang.

Sharon Scolari came to a stop after a spin late in the race, briefly bringing out the double yellow flags as marshals cleared the track. She eventually managed to get the car going down, a handful of laps down, but finished outside the top 10.