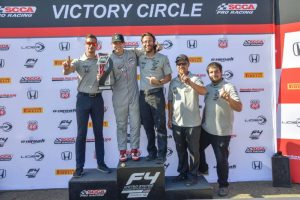 Dakota Dickerson moved to the top of the United States Formula 4 standings at Mid-Ohio with his first win of the season.

Dickerson, who had already taken five podiums this season, started on pole for the first race of the weekend ahead of Brit Teddy Wilson and Dane Christian Rasmussen.

Rasmussen passed Wilson off the line and spent most of the race battling Dickerson for the lead. Dickerson defended well, and managed to keep Rasmussen behind until the race was neutralised by a full course yellow.

Further down the order, Justin Gordon had collided with Jake French, sending French into the tyre wall and bringing out the FCY which the race ended under.

Early in the race Kent Vaccaro and Chandler Horton collided, briefly bringing out the safety car.

Benjamin Pedersen was one of a number of drivers hurt by the limited green flag running. The previous championship leader had a difficult qualifying and was then handed a five place grid penalty for failing to slow sufficiently for yellow flags. It put him 11th on the grid, but he quickly began to move up through the order. He finished fifth, behind Wilson and James Raven.

Race two should have been easier for Pederson, who started third behind Dickerson and Rasmussen. But a spin early in the race dropped him out of the lead fight, prompting another climb up through the field.

Dickerson and Rasmussen picked up where they left off from the first race. Rasmussen pushed hard, eventually managing to find a way past the leader in the closing stages of the race, but Dickerson fought back. The pair finished just 0.471 seconds apart, with Rasmussen just ahead.

Wilson finished third after late attacks from Raven. Jacob Abel managed fifth, his best finish of the season so far.

Raven started from pole for the final race, with Dickerson alongside him and Rasmussen just behind. Pederson, starting sixth, once again had work to do.

Dickerson and Rasmussen managed to pass Raven on the opening lap, with Rasmussen claiming the lead.? A small mistake from Dickerson dropped him back to fifth, leaving Rasmussen unchallenged for the remainder of the race. Raven finished second.

Wilson was left defending against Pederson and Dickerson for third. The two championship contenders pushed hard, but Wilson managed to pull away in the closing stages to finish less than 0.4s ahead of Pederson.

American racer Kory Enders claimed a hat-trick of victories in the final round of the 2017-18 NACAM F4 season.

After Scuderia Martiga EG team-mate Moises de la Vara wrapped up the championship at the previous round, it was Ender?s turn to claim the glory at Mexico City.

Enders, who joined the championship at the penultimate round, narrowly topped both qualifying sessions. In the races though he was dominant, with the smallest winning margin being 7.7s.

Championship runner-up Igor Fraga started the opening race second. He attempted to challenge Enders for the race lead, but a fuel pump problem took the Brazilian out of the race four laps in. There was more misery for Fraga in race two when he failed to make the start, but a fresh start from sixth on the grid in race three gave him a chance at redemption.

A problem-free race allowed Fraga to climb up to third, just ahead of de la Vara.

For the first time this season, de la Vara didn?t take a podium finish in Mexico City. The champion-elect was on the back foot in race one after failing to set a time in qualifying, but managed to climb through the field to finish fourth. A sixth followed in race two, and a fourth in race three.

Inigo Leon, who finished second in race one, secured the rookie crown while another championship newcomer, Francisco Porto, finished runner up in races two and three.

Tuomas Haapalainen and Michael Belov shared the victories in the second round of Formula Academy Finland.

Belov claimed pole, with Ivan Shvetsov starting in second and Haapalainen third. Haapalinen made the better start, immediately challenging Belov, and then taking the lead from him.

The pair battled throughout, with Belov setting the track record in the process. It was Haapalinen ahead when the chequered flag fell, finishing 0.380s ahead. Shvetsov held onto third ahead of Jesse Salmenautio and Ivan Berets.

Race one fastest lap put Belov on pole for race two, with Shvetsov and Haapalinen starting second and third once more.

Once again Haapalainen made a strong start, rising to second before a mistake put him in the gravel. He dropped down the order, eventually finishing sixth.

Belov was comfortable in the lead, finishing 3.8s ahead of Pavel Bulantsev.

Bulantsev suffered in the first race. An early mistake dropped him down the order. During his recovery he managed the fifth best time, putting him there on the grid for race two. He spent most of the race battling with Shvetsov, but a five-second penalty for passing under yellow flags dropped Shvetsov back to fifth.