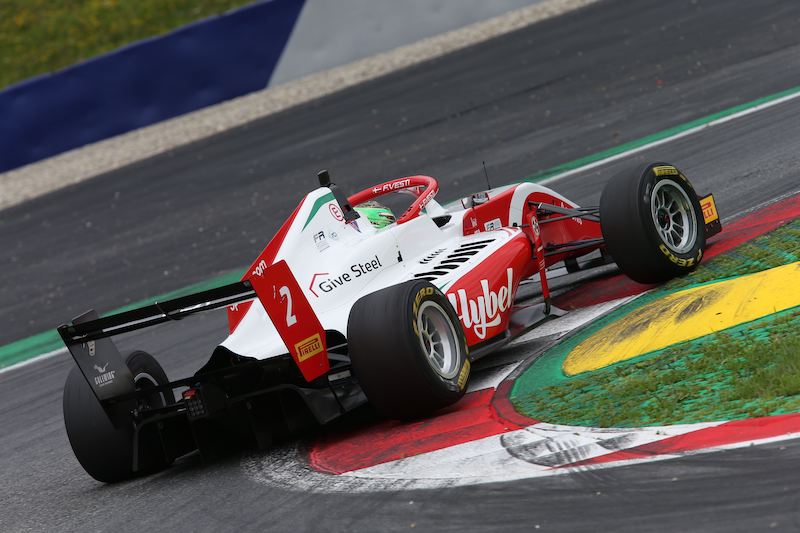 Frederik Vesti took his fifth Formula Regional European Championship win in a row in the opening Red Bull Ring race, but had to fight from behind for victory.

By Turn 3, poleman Vesti had already lost his lead to Prema team-mate Fittipaldi in a Max Verstappen-like move, and he conceded second place to DR Formula by RP Motorsport’s Igor Fraga a corner later.

Fittipaldi pulled away in the opening third of the race, with Fraga holding off Vesti for five laps. By half-distance, Vesti had got that lead down to half a second, and that was quickly reduced to nothing when a high speed wheel failure for Alexandre Bardinon brought out the safety car.

Vesti reclaimed the lead at the restart after Fittipaldi dipped two wheels into the gravel on the exit of Turn 4. A incident with Fraga then dropped Fittipaldi to fifth, although his points loss to title rival Vesti was reduced when US Racing team-mates David Schumacher and Marcos Siebert went side-by-side out of Turn 4 and repeated Fittipaldi’s off.

This time Siebert kept on turning into the gravel though and dropped out of the points, while Schumacher claimed the final podium spot. Fourth place for Fittipaldi means he is now 43 points behind winner Vesti.

Fraga’s team-mate Raul Guzman finished a quiet fifth, just ahead of Van Amersfoort Racing’s Sophia Floersch. She started from the back of the grid after an out-lap clutch failure prevented her from setting a lap in qualifying, but several aggressive passes helped her back into the points.

A poor start by the returning Matteo Nannini, who only recently turned 16, meant he fell down the order, but he gained from the calamities in front to claw back eighth place and his first points, just behind Prema struggler Olli Caldwell.

Tom Beckhauser fought with most of the drivers in the lower half of the grid and was rewarded with ninth, while Isac Blomqvist took KIC Motorsport’s only point in 10th.