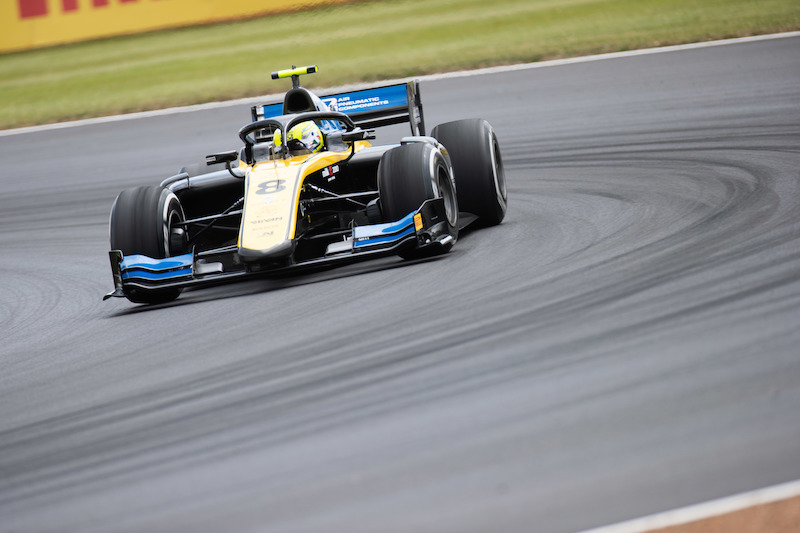 Ghiotto started second on the grid in an all-Virtuosi front-row and made a faster start than first-time pole-sitter Guanyu Zhou to lead into the first corner.

He built a 1.4-second lead before the pit-window opened on lap six, when Virtuosi brought Zhou into the pits from second place and kept Ghiotto out.

Latifi, who jumped his DAMS team-mate Sergio Sette Camara for third on lap one, followed Zhou into the pits and rejoined ahead.

Ghiotto pitted a lap later and managed to come out just ahead of Latifi, but had to immediately defend the inside into Brooklands on cold tyres. A few turns later, the pair made light nose-to-tail contact as they accelerated towards Maggotts.

Two laps later, Ghiotto again tried to cover the inside line at Brooklands but locked up and went deep, allowing Latifi to get past.

Ghiotto was able to respond however to keep Latifi under pressure, and dived inside the DAMS driver at Stowe after less than three laps behind.

The Italian was able to pull away thereafter, his lead at one stage over five seconds before clinching the win by 3.3 seconds.

It is Ghiotto’s first feature race victory since he stepped up to GP2 in 2016, having previously had one taken away from him by a penalty at Monza in 2017.

Latifi and Zhou completed the podium, with Sette Camara having a relatively quiet run to fourth.

Jack Aitken overtook championship leader Nyck de Vries for fifth place at Village three laps from the end, having challenged the ART driver at the first corner of the race following a now-typically strong launch from eighth.

Squeezed to the inside and forced to back out, Aitken dropped to ninth, as Austria feature race winner Nobuharu Matsushita rose from ninth to sixth behind Carlin team-mate Louis Deletraz.

In contrast to Austria, the Carlin pair faded and ended up seventh and ninth, separated by Callum Ilott, who gains reverse-grid pole for his home sprint race.

Jordan King took the final point by holding off Mick Schumacher – who was the only Prema driver in the race after team-mate Sean Gelael had withdrawn from the rest of the weekend shortly beforehand.

Nikita Mazepin led a large part of the race on the alternate strategy, and was set to finish 12th before being hit from behind by Arjun Maini as he appeared to slow on the exit from Club towards the finish line. Mazepin spun to the inside of the track and didn’t get going again.

Anthoine Hubert didn’t get away from the grid at the start and finished a lap down together with Giuliano Alesi, whose car came to a halt following his pit-stop.