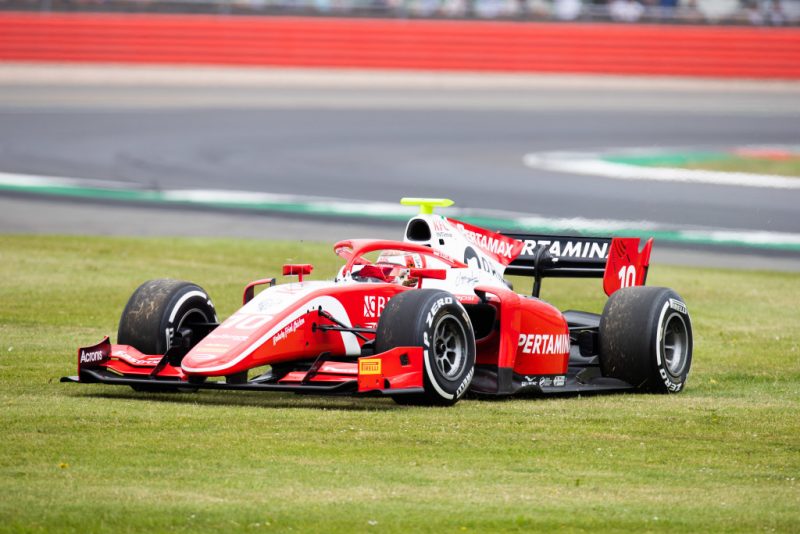 Prema Formula 2 driver Sean Gelael will not take part in either race at Silverstone, withdrawing after he was handed a grid penalty for his practice clash with Louis Deletraz.

The two drivers collided at Brooklands early in Friday’s practice session, when Gelael on a hot lap tried to overtake a slow-moving Deletraz on the inside.

The resulting suspension damage meant that Gelael missed most of the session.

Initially, Gelael was given a reprimand for the incident, but stewards revisited it on Saturday and gave the Indonesian a three-place grid penalty, dropping him from 18th to 20th.

An FIA statement said that “the stewards determined that [Gelael] misjudged the position of [Deletraz] in the corner.”

Gelael was also given two penalty points, bringing him up to 10 for the season so far – just two short of the 12-point mark that incurs a one-round ban.

The statement added that the decision to reconsider the judgement came “after clarification of the wording of the 2019 FIA F2 Sporting Regulations Article 38.3”, which outlines the penalties available to the stewards.

Gelael took part in the F2 drivers’ parade held three hours prior to the feature race, but Prema later announced that he would miss the races, citing “personal reasons following the events occurred in the first part of the weekend”.

In the statement, team boss Rene Rosin said: “We are said to see Sean sit out of the races but we respect his decision. We look forward to giving our 100 per cent to score the best possible results here at Silverstone.”

Gelael’s team-mate Mick Schumacher was due to start the feature race from 13th on the grid.