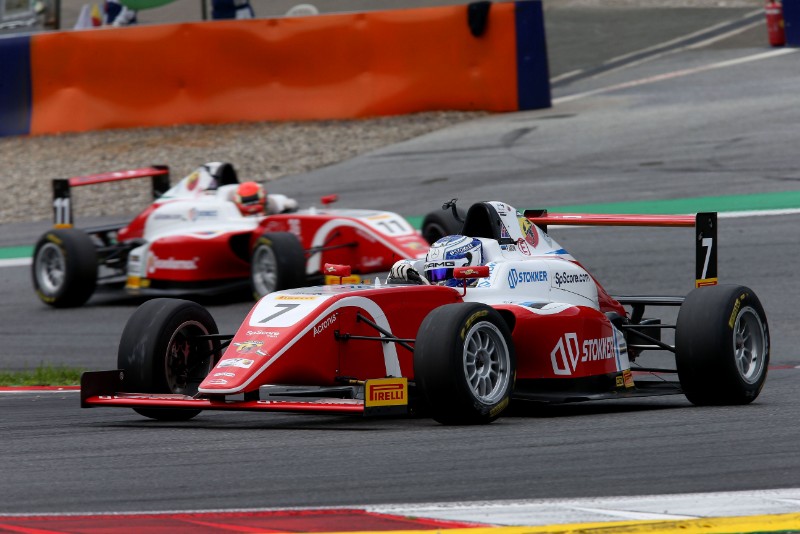 Aron started the race in second, and after following Niklas Krutten past poleman Roman Stanek at Turn 1, he stuck in the leader’s slipstream until making an overtake at Turn 4. A second later, Sauber junior Stanek drove off into the gravel.

Through the 19 laps of the race, Aron held off pressure from Krutten at nearly every corner, and it was only at the very end did Aron’s lead grow to 0.768s.

With Stanek gone, third place was fought over between Mucke Motorsport’s Joshua Duerksen and William Alatalo. They only moved into those positions after a clash between Giorgio Carrara and Mikhael Belov in front brought out the safety car, and that Prema’s Alessandro Famularo was slow on the restart.

Dennis Hauger followed them through, and although he did not have the pace to battle with them, he did reduce Gianluca Petecof’s lead in the standings. Petecof, who got warned for track limits violations on multiple occasions, was outside of the points for much of the first half of the race and recovered to eighth with two key passes on Gregoire Saucy and Jonny Edgar.

Of the drivers involved in early drama, all failed to finish bar Jenzer Motorsport’s Carrara, who crossed the finish line in 19th and with fastest lap.

Billy Monger: ‘I could’ve challenged for win’ without lap-one clash