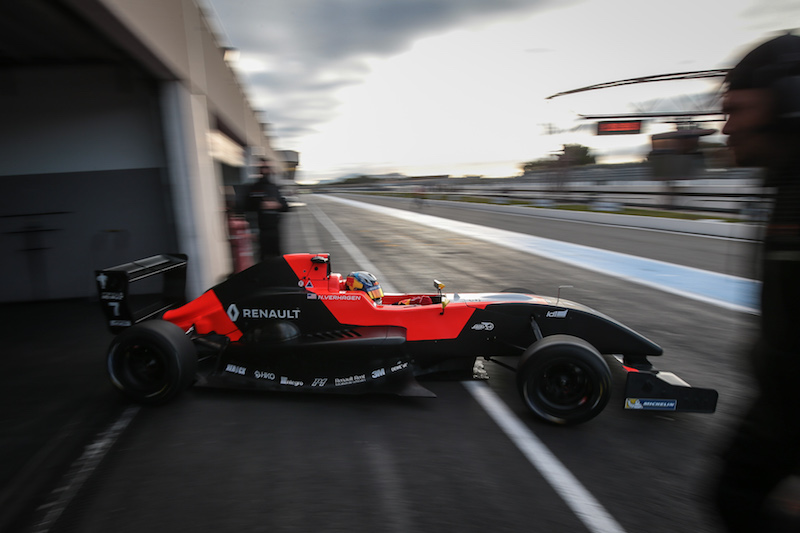 American Red Bull Junior Verhagen, who was fastest on his debut with Tech 1 Racing in Barcelona, lowered the benchmark he set on day one at Paul Ricard, setting a 2m02.703s in the closing stages of the afternoon.

After beating French Formula 4 runner-up Martins by 0.021s on Tuesday, his margin over the R-ace GP driver this time was 0.054s, with Martins setting his time in the morning session.

While Verhagen was the only driver underneath the 2m03s mark in the afternoon, Martins was joined in the 2m02s in the morning by Richard Verschoor (Josef Kaufmann Racing) as well as team-mate Logan Sargeant.

R-ace GP filled four of the top five places in the morning – with Charles Milesi and Max Fewtrell rounding out the top five – but focused away from one-lap pace in the afternoon, when Martins was its lead driver in 15th, 1.68s off the pace.

Renault protege Christian Lundgaard took sixth in the morning ahead of Arden tester Oscar Piastri and French F4 champion Arthur Rougier, who switched from Fortec to Tech 1 for the second day of the test. Verhagen was ninth and Yifei Ye was 10th.

Second to Verhagen in the afternoon and sixth overall ahead of Fewtrell was JD Motorsport rookie Lorenzo Colombo.

Ye improved his time in the later session for third place, as did Rougier in fourth. Alexander Vartanyan took fifth for Arden, with team-mate Piastri eighth behind MP duo Jarno Opmeer and Lundgaard.