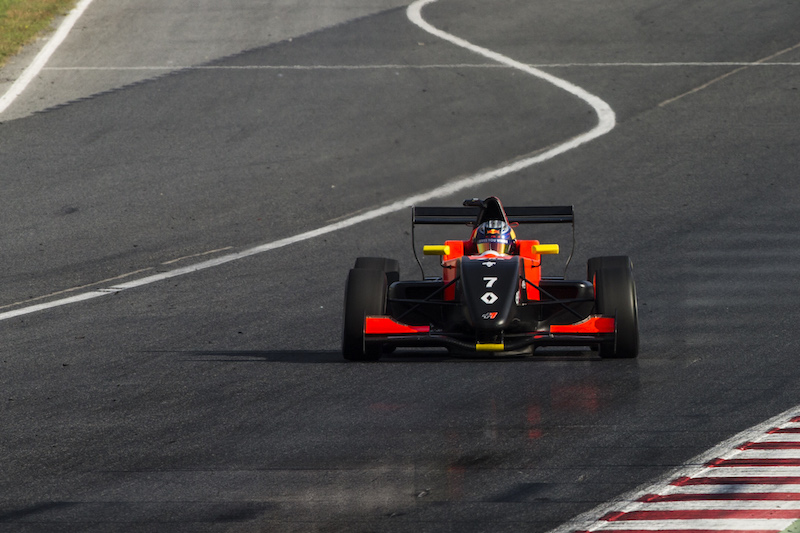 Colombo, third in Italian Formula 4 this season and one of 15 rookies invited to the test by Renault Sport, set the pace in the morning session for JD Motorsport and was also on course to also top the afternoon running with only 10 minutes remaining.

Verhagen then posted a 1m42.146s, beating Colombo’s morning benchmark by just 0.004 seconds and his best afternoon effort by 0.083s.

Aside from Verhagen, who switched to Tech 1 Racing after finishing 11th in his maiden Eurocup season for MP Motorsport, the day’s 12 quickest drivers set their best times in the morning.

Colombo’s impressive pace came after he made his Euroformula Open debut at Barcelona last weekend with Campos Racing, and then topped the post-event test on Monday in front of the team’s Formula 2 racer Alex Palou.

Richard Verschoor moved from MP Motorsport to champion Sacha Fenestraz’s Josef Kaufmann Racing car and was fourth in the morning, just in front of Yifei Ye, who remained with the German outfit.

Oscar Piastri was third best rookie in sixth place for Arden, with Max Fewtrell seventh after moving into Robert Shwartzman’s R-ace GP car and vacating his Tech 1 machine for Verhagen, who was eighth in the morning.

Behind Verhagen and Colombo, the afternoon top six was completed by Verschoor, Martins, Piastri and Smolyar.

After his victorious Euroformula Open debut at the circuit last weekend, Felipe Drugovich was ninth in the afternoon with Arden and BRDC British F3 graduate James Pull was 10th for Tech 1.

British F4 champion Jamie Caroline did more laps than anybody in the morning with 57 before missing the afternoon session to travel to Silverstone for his Porsche Carrera Cup Great Britain scholarship assessment.

Driving for Tech 1, he was 23rd quickest in the morning, just behind BRDC British F3 champion Enaam Ahmed, who was in action for Fortec and was later 26th in the afternoon.

ADAC F4 champion Juri Vips had a quiet day on the timesheets for Josef Kaufmann Racing, with 32nd in the morning and 27th in the afternoon, when he triggered a red flag.