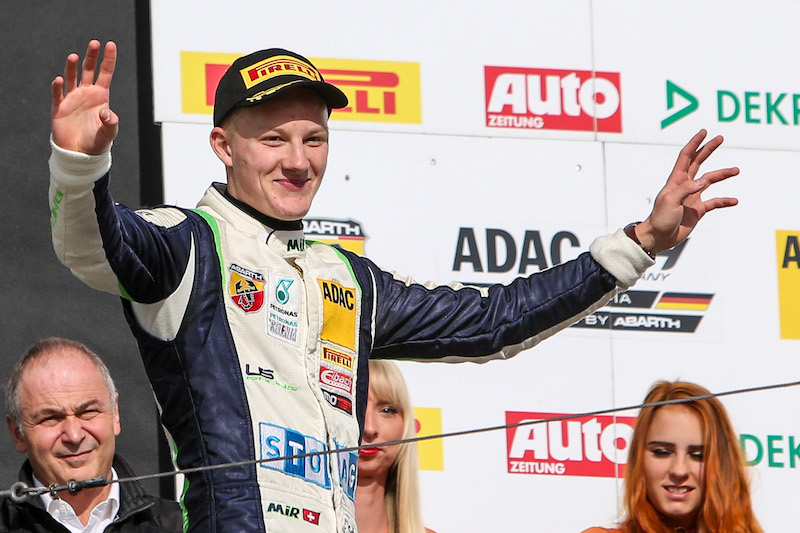 ADAC Formula 4 race-winner Fabio Scherer will step up to the Formula 3 European Championship next season with Motopark, becoming the first driver confirmed to race in the series in 2018.

The 18-year-old Swiss driver graduates to F3 after two years in ADAC F4, finishing fifth in the 2017 standings with US Racing, taking a win at the penultimate round at the Sachsenring alongside five other podium finishes.

He was 17th in the standings in his rookie season with Jenzer Motorsport, after storming to victory on slicks on a drying track at the Lausitzring.

?I definitely feel I?m ready to move into F3 and I can?t wait for the season to start,??he said.

?It?s going to be a big progression in terms of the drivers I will face and needing to learn a new, faster car but I am happy with that.

?It?s an important step in my career ? F3 can decide your future in motorsport. I have to make next year count and go for the best results I can. But I?m ready for that challenge.

?It?s nice to be joining a team with Motopark?s record and it feels quite comfortable with them already.

?It?s a bigger team than I?ve been used to before and it?s a good feeling to have so many people supporting me and helping my career to go further.?

Team boss Timo Rumpfkeil said:??We have been following Fabio?s career very closely in F4 and he impressed us a lot this season.

?We tried to get him into our ADAC F4 team this year but Fabio chose to go in another direction which was fine. As soon as his season was finished though, we got back in touch with Fabio to see whether we could become a partnership in 2018.

?He has a huge amount of potential in motorsport and we?re very pleased that he?s chosen to join Motopark and that we will have the chance to help him develop in 2018. Winning the rookie championship and races is definitely the target with Fabio next season.?

Scherer’s F4 team-mate Julian Hanses could also be in line for a Motopark F3 seat for 2018 after recent tests, having made the series the aim for his next step.