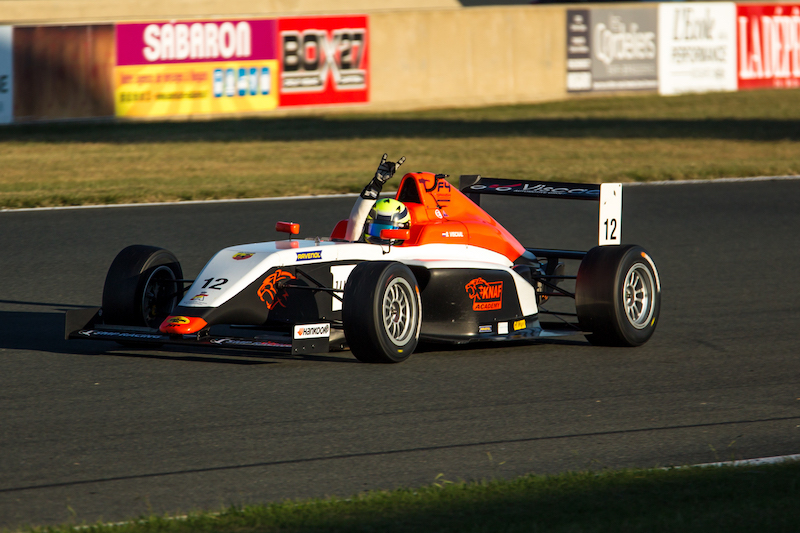 Bent Viscaal took his third and fourth wins of the Spanish Formula 4 season in the championship’s visit to France, moving into title contention in the process.

The Dutch driver started the Nogaro weekend with his first ever pole, with championship leader and MP Motorsport team-mate Christian Lundgaard alongside him.

Viscaal held the lead at the start, and drove a composed race to beat Renault F1 junior Lundgaard by 1.5 seconds.

The battle up front briefly included SMP Racing driver Alexander Smolyar, who is Lundgaard’s main rival for the title.

Viscaal started at the front again for the second race, with Smolyar moving into second at the start, ahead of Lundgaard.

Lundgaard applied continuous pressure on rival Smolyar but could not find a way past, while Viscaal came home with another victory.

With his championship lead now reduced to 16 points, Lundgaard had to make amends in the final race of the weekend, which he started from pole.

His plan to win only lasted four corners before a clash with Nikita Volegov knocked him down the order.

Smolyar inherited the lead, with Viscaal just behind.

Lundgaard needed to make it back up to fifth to retain the championship lead, which he did before half-distance. He eventually overtook Guillem Pujeu too for fourth, and his championship lead was almost stretched back out to 10 points when Viscaal attempted to overtake Smolyar for the lead.

Smolyar just held on for victory, his eighth of the season, with Viscaal and Lukas Dunner completing the podium.

For Dunner it was his first podium of the season, and he claimed it after late pressure from the resurgent Lundgaard.

Lundgaard, Smolyar and Viscaal go into next month’s Estoril finale separated by 51 points, with 65 still to play for.