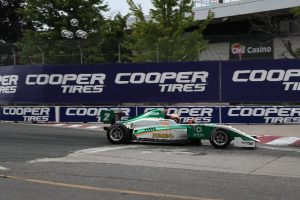 Rinus VeeKay closed in on the Pro Mazda championship lead in the opening race at Toronto, although it was a crash involving Harrison Scott that got the most attention.

On the opening lap of the race RP Motorsport driver Scott got squeezed by Exclusive Autosport’s Antonio Serravalle on the run to Turn 3.

Scott was pitched airborne, and landed with broken suspension at the front and rear, meaning he had no control of the car as it entered the corner. The Englishman rode over the rear of Sting Ray Robb at corner entry, and was launched several metres into the air and a considerable horizontal distance as he barrelrolled down the escape road.

Emergency assistance was provided within seconds of the impact, thanks to one of the safety trucks being stationed at Turn 3, and Scott emerged remarkably uninjured.

Scott also made contact with Robb’s team-mate Andres Gutierrez during his collision, and Robb was then rear-ended by Robert Megennis at the apex of the corner. The four of them, plus Serravalle, all retired on the first lap.

VeeKay led the field away on both the initial start and the restart, but had to do it again when championship leader Parker Thompson (Exclusive Autosport) collided with David Malukas after the latter attempted a late lunge at Turn 1 in their BN Racing car.

Another caution period was required, and VeeKay’s Juncos Racing team-mate Carlos Cunha was promoted to second. The Brazilian had started down in 11th after crashing in qualifying.

Despite the numerous caution periods, VeeKay took an assertive victory, and also set a new lap record. Retirement for Thompson means just 20 points separates them at the top of the standings now.

Cunha finished second, while RP Motorsport had something to smile about after Raul Guzman bettered Cape Motorsports pair Oliver Askew and Nikita Lastochkin for third. Charles Finelli was the only other finisher.

VeeKay also took pole for the second race, with Malukas alongside him on the front row. Scott is set to start fourth, pending his team rebuilds his car in time.