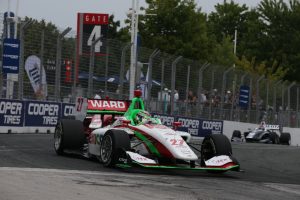 The Indy Lights points lead switched hands from Colton Herta to Patricio O’Ward in the first Toronto race after a victory for latter and an injury-induced retirement for the former.

Herta took his second pole of the season in qualifying, but crashed late in the session and fractured his left thumb. He was cleared to race, and given a splint to ensure he could grip the steering wheel.

A poor start from pole handed Andretti stablemate O’Ward the lead, and the slowness of Herta’s getaway led to him being rearended by Belardi Auto Racing’s Santiago Urrutia. Herta was briefly airborne, but both cars continued, with Aaron Telitz (Belardi) and Ryan Norman (Andretti) moving up to second and third.

Herta worked hard to regain second place, setting a new lap record in the process, but eventually the combination of a weak grip and taking too much kerb at Turn 5 resulted in his race ending in the barriers.

The clean up operation for Herta’s abandoned vehicle coincided with a rain shower, and the race got back underway in slippery conditions.

O’Ward held on to the lead on the restart, with Urrutia taking second from team-mate Telitz. He had a spin later round the lap, dropping him back to third, this time behind Victor Franzoni, who promptly crashed his Juncos Racing car and ensured the race finished under caution.

Victory therefore went to O’Ward, with Urrutia second and Ryan Norman in an inherited third.

A pitstop to replace his nosecone dropped Telitz to fourth, a fair distance ahead of Dalton Kellett, who finished a lapped fifth.