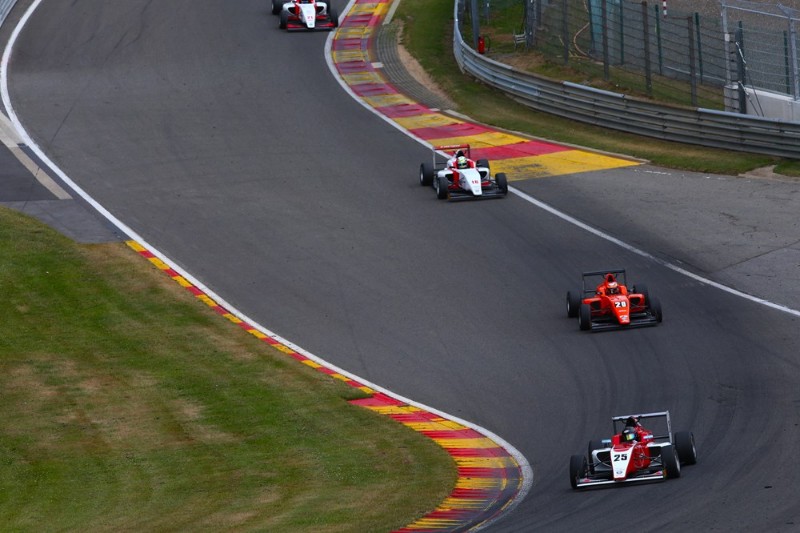 The Hillspeed driver made good use of the slipstreaming available at Spa to climb up from eighth on the reversed grid, passing Joshua Mason late in the race and breaking the tow to finish 0.719 seconds ahead.

Mason was the big mover in the first half of the race. The Lanan Racing driver was running third after an early safety car, brought out by race one winner Kaylen Frederik running into the gravel on the opening lap.

He made quick work of Pavan Ravishankar, and soon closed onto the back of his Double R Racing team-mate Neil Verhagen for the race lead.

The pair swapped places three times in one lap, with Mason briefly taking the lead at Les Combes only for Verhagen to sweep back past at the exit of Pif Paf. Mason finally managed to make the move stick at the Bus Stop chicane and began to pull away.

Meanwhile, Varrone had managed to pass Mason’s team-mate Andreas Estner and Ravishankar at the same corner to take third, before passing Verhagen a few laps later at Les Combes.

Mason spent the closing stages of the race defending hard as Varrone tried to find a way past. On the penultimate lap, Varrone found a way through to win what is just his fifth F3 race.

Mason then came under attack from Verhagen, but held off the American racer to take second. Ravishankar finished fourth, ahead of Estner, Benjamin Pederssen and Johnathan Hoggard.

Kiern Jewiss passed the battling Clement Novalak and Ulysse de Pauw at the final corner of the race to take eighth. Novalak initially claimed ninth, but was then penalised for his move for the position on De Pauw and was dropped to 10th. His championship lead over Hoggard now stands at 36 points.