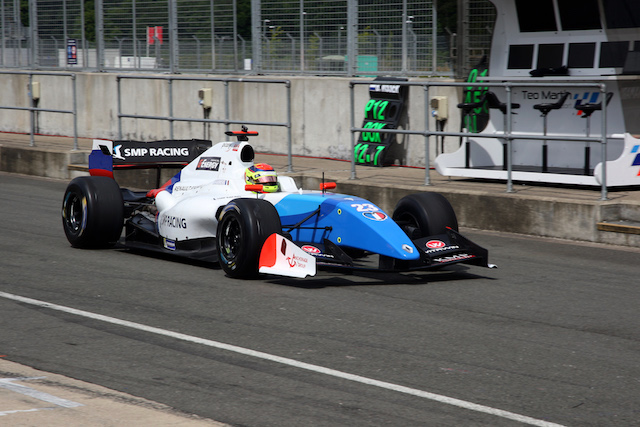 Matthieu Vaxiviere has taken pole position for the first race of the Formula V8 3.5 weekend at Silverstone in a front row lockout for the SMP Racing programme.

Moving to top spot in the final runs of the session, he had just 0.022 seconds in hand over stable-mate?Egor Orudzhev before a further improvement on his next lap moved him 0.128 seconds clear.

Vaxiviere’s one previous 2015 pole came at the last round at Paul Ricard, when Orudzhev ended up with?victory.

Roy Nissany had dominated Friday’s running with Vaxiviere’s old Lotus team and led much of the session, but had to make do with third.

The championship’s top four followed in order, with?Tom Dillmann ahead of?Louis Deletraz?(who had moved to top spot with the first effort of his final run),?Aurelien Panis and?Rene Binder.

Pietro Fittipaldi and Yu Kanamaru both had stints in second place but ended up eighth and ninth in front of?Alfonso Celis.

The field is down to 13 cars this weekend from the usual 15, with SMP Racing’s?Matevos Isaakyan and RP Motorsport’s?Artur Janosz focussing on their GP3 campaigns in Hungary.